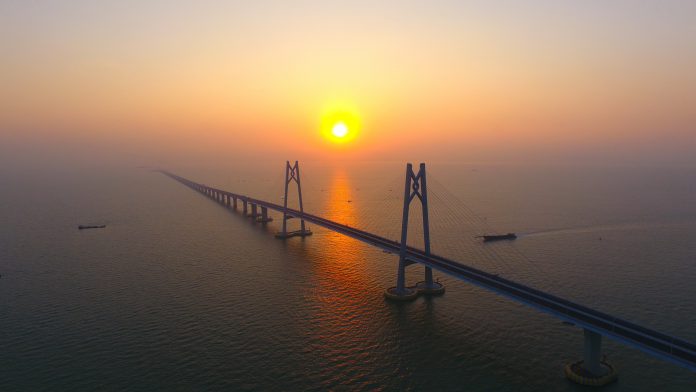 Macau (MNA) – A marathon will be held at the Hong Kong-Zhuhai-Macau Bridge (HZMB) on March 18, news outlet China News reported this Friday.

According to the report, the Zhuhai municipal committee announced registration for the event will start next week and last for two weeks, with the event expected to attract some 10,000 participants.

Runners will be able to choose between running a full 42-kilometre marathon or a shorter 5-kilometre one, with a RMB1.22 million (MOP1.52 million/US$188,806) prize to be awarded to the fastest eight runners in both the men and women’s categories.

The HZMB spans 55 kilometres with the main section including a 22.9-kilometre bridge and a 6.7-kilometre underground tunnel.

The races will start from the Zhuhai side, involving a round trip between the main section of the bridge and the western artificial island that connects the main section with Zhuhai and the Macau SAR.

After nine years of construction, the completion date of the HZMB, previously set for December 31, 2017, has been further delayed to February of this year, when the main section of the bridge is to be completed.

A report by China Daily on January 8 stated, however, that the super bridge would open in May or June of this year, with the latest figure placing the bridge’s total cost at RMB120 billion.

According to the latest information provided by the MSAR Government, the city will have to contribute some RMB2.57 billion of the estimated RMB20.41 billion to be paid by the MSAR, Mainland China and Hong Kong for the construction of the main bridge.