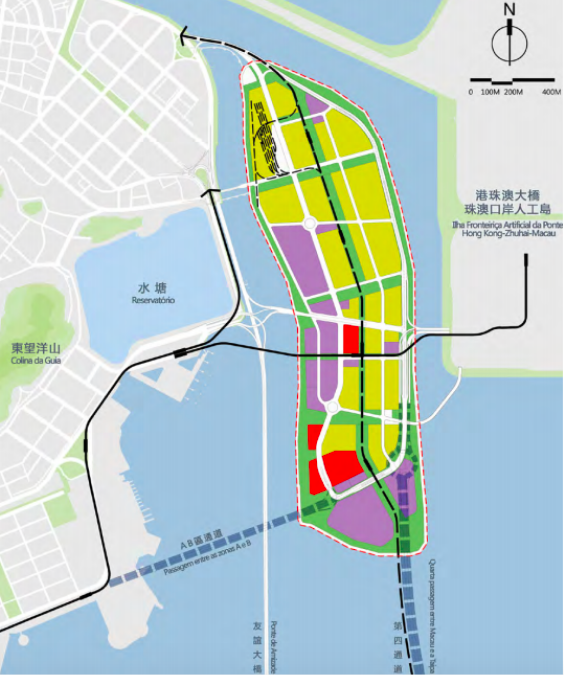 Macau (MNA) – During an Urban Planning Committee meeting held this Wednesday, government officials revealed that of the two LRT lines that will cross the New Area Zone A, the North-South line will be underground so as to not impact the area’s central green corridor, while the West-East line connecting the Macau Peninsula to the Hong Kong-Zhuhai-Macau Bridge will be overground.

The CPU meeting discussed the project plans for eight land plots in the reclaimed area, seven for public housing projects and one for public installations.

The response was provided after several CPU members complained about a lack of information on the planned LRT track and the planned underground projects in the reclaimed area.

An LRT intermodal transport station is also to be developed in Zone A, with CPU member Lam Iek Chi questioning the need to plan the station before the public housing is built since “probably the LRT won’t be finished before housing”.

Legislators also questioned the government on the traffic planning for the reclaimed area, with legislator and member of the committee, Mak Soi Kun saying that initial calculations of traffic in the area possibly hadn’t taken into consideration traffic coming from the Gongbei Border or peak rush hour periods after 5:00pm “when parents go to pick-up students at school”.

CPU member Ieong Tou Hong stated that since traffic is significantly affected by school hours, it was positive that school projects have already been included in the plans for Zone A, but said more details about planned education facilities were needed in order to have a full picture of the traffic issues.

“The schools should be built and finished at the same time the public housing buildings are constructed, so as not to create more pressure on the traffic. Also how many schools will be built? Zone A might have 10,000 or 20,000 students. This should’ve already be planned,” he added.

A representative from the Land, Public Works and Transport Bureau (DSSOPT) responded to the question that traffic evaluation of Zone A has been conducted taking into consideration what access points to the reclaimed area will be most used.

Zone A will include four access points to the Macau Peninsula, one bridge to Rotunda da Amizade, one bridge to Avenida do Dr. Francisco Vieira Machado, one bridge to the Outer Harbour Ferry terminal and one tunnel connecting Zone A to Zone B.

A fourth bridge is also to be developed to connect Zone A with Taipa, with public works representatives saying no authorisation has yet been received from the Chinese central government to start construction.

A bridge between Zone A and the Hong Kong-Zhuhai-Macau Bridge will also be constructed.

Architect Rui Miguel Rebelo Leão asked public works to establish pedestrian lanes on the access roads to Zone A, since it would be “unsustainable to ask everyone to drive a car to cross to Zone A”.