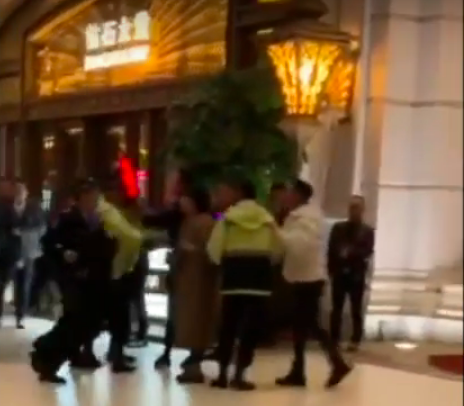 Macau (MNA) – A police officer fired a shot into the air outside the entrance of Galaxy Macau after an argument involving three Mainland Chinese men who were smoking in a restricted area.

The incident occurred on Thursday at 11:00pm, outside one of the property’s main entrances.

While nobody was shot during the incident, some police officers experienced minor injuries during the scuffle, according to a representative from the Public Security Police (PSP).

A man wearing white (pictured below) with a group with two others became aggressive after being approached by police officers who had informed him that smoking was illegal on the premises under Macau’s new smoking ban.

However, the man in white became agitated and attacked the police officers, despite a woman trying to stop the fight and shouting in Mandarin, “Stop fighting!”

Policemen used batons in order to intimidate the men to retreat, but when this failed a policemen then fired a warning shot into the air.

The man in white continued to shout at police officers even after the warning shot had been fired.

Later, PSP officers detained the three men and the case is being transferred to the Public Prosecutions Office.

Macau has implemented a smoking ban in integrated resorts, effective from January 1.

Casino patrons are banned from smoking in casinos outside of designated areas, and may be fined up to MOP200,000 (US$24,795).

All injuries had been treated as of 3:00am on January 4.

The last time local police officers had to use their guns during service took place in 2007 when violence broke out during large scale protest on Labour Day May 1 with CPSP officers firing warning shots into the air to disperse the crowd.

A 50-year old passing motorcyclist was struck in the neck by one of the bullets but survived during the incident.

December 6, 2022
US and European Union officials met for trade and technology talks Monday, but hanging in...

December 6, 2022
Canadian authorities are investigating how Canadian-made parts made it into Iranian drones used by Russia...
Load more