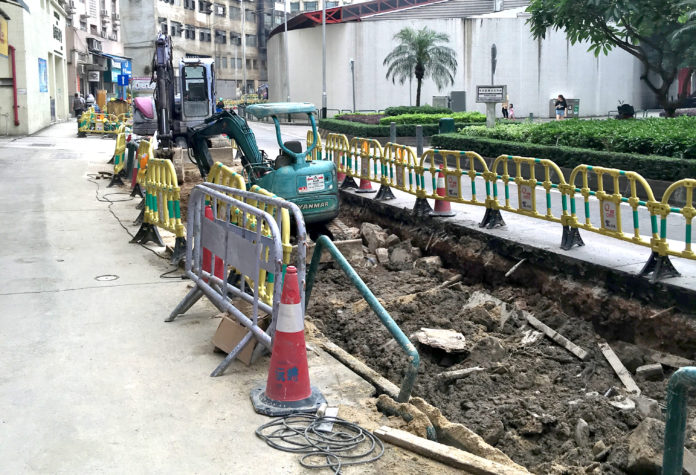 Macau (MNA) – The Macau government Road Works Coordination Group said on Tuesday that the level of traffic disruption caused by road works will be larger in 2019.

“We know that the number [of works] is large and that they will definitely lead to more pressure towards traffic. The Transport Bureau (DSAT) will try to closely monitor the works’ progress and better coordinate [with other services], especially when it comes to traffic and open lane changes, while divulging information to the public swiftly,” the DSAT Deputy Director, Chiang Ngoc Vai, said.

In the Macau Peninsula, works will be conducted at Avenida Almirante Lacerda, Rua do Visconde Paço de Arcos, Rua de Luís Gonzaga Gomes and in Avenida da Amizade, with these projects said to create the largest traffic disruption.

Works at Avenida Conselheiro de Almeida for installing cables and plumbing were initiated in Summer of this year but unfavourable conditions delayed it to October, with works expected to be concluded before the Chinese New Year in February, 2019.

“The work involves four contracted companies, plus DSAT and the Civic and Municipal Affairs Bureau (IACM) […] We know it will impact traffic, we need to evaluate the surrounding area, there are many schools and residences […] We tried to reduce as much a possible the impact to citizens […] If works are not finished by Chinese New Year, they will be suspended during that period,” the DSAT representative said.

Meanwhile, a rainwater drainage station will be developed at Avenida Almirante Lacerda to help in flood prevention, with the avenue to suffer considerable traffic disruption as two of the avenue’s four lanes will be closed.

Works will be initiated in the 2019 Summer holidays and are estimated to last for 180 days, with temporary lanes to be created and the project to progress in phases in order to diminish its impact on traffic.

Avenida da Amizade will suffer road works to replace sewage pipes and Rotunda da Amizade in Areia Preta will have works to construct viaducts to ease increased traffic in the area after the Hong Kong-Zhuhai-Macau Bridge opening.

Works for a pedestrian lane will be carried out from Avenida de Guimarães to Avenida do Estadio, while works initiated at Rotunda da Piscina Olímpica in 2018 will continue, with an unoccupied construction site near Galaxy to be used for extra temporary lanes to ease intense traffic in the roundabout on January, 2019.

Viaduct works at Estrada de Pac On to install drainage systems and a connection to the future New Area E2 in front of the Pac On Ferry Terminal will also continue.

The electric energy supply company CEM also stated that it will install electric cables early next year in Estrada do Istmo in Cotai to supply future hotel projects and the future Islands District Medical Complex.