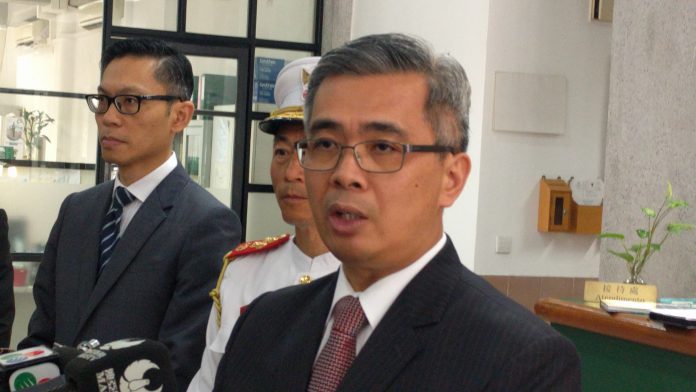 Macau (MNA) – The Macau SAR Secretary for Security, Wong Sio Chak (pictured above), said on Monday that wiretapping for investigation can only be performed when the police have received court approval.

The Secretary was replying to questions raised by the press about the danger of abusing the use of wiretapping, stressing “there are regulations to abide by and procedures that must be undergone in order to perform wiretapping.”

The information was revealed by Secretary Wong following a graduation ceremony for firefighters of the 14th edition held today in the Academy of Public Security Forces in Coloane.

The Office of the Secretary for Administration and Justice has recently announced that it is drafting new legislation for the ruling of interception and protection of communication during criminal investigations, with the Secretary confirming today that the local security departments are striving to conduct a public consultation on the matter by July or August this year.

“Legal experts have concluded that it is suitable to establish a separate law [to regulate interception and protection of communication],” said the Secretary, “given that the Code of Criminal Procedure cannot be repeatedly revised due to the necessity to keep the Code stable.”

In Macau, the current legislation regulating the use of wiretapping for criminal investigation purposes is covered by Articles 172 and 175 of the Code of Criminal Procedure.

The Secretary also indicated that wiretapping could be performed regarding crimes for which a maximum sentence would be less than three years imprisonment, under what the police consider to be “special circumstances” although the Secretary did not elaborate on the matter, stating that the current bill suggests the intrusive method usually be implemented for crimes of three years imprisonment or more.

The Secretary also said he perceives that the frequency of utilising wiretapping might be increased since different forms of crimes have occurred with the advancement of technology. He did not give details about the crimes he was referring to.

Wong also clarified that the Cybersecurity Law, which is still awaiting further legal procedures in order to become effective, differs from the law of communication interception and protection, given that the “former seeks prevention and the latter seeks [solutions] for investigation.”

“[The Cybersecurity Law] regulates the operation of the fundamental infrastructural facilities and monitors the telecommunication service providers to fulfil their special responsibilities … [and it] also has the duty to ensure the Internet safety,” said the Secretary.