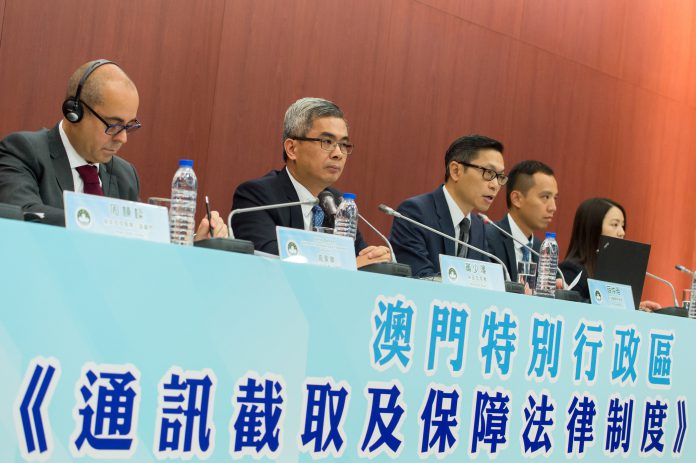 Macau (MNA) – The Macau SAR Government would not consider to prepare and release any reports that would disclose the number of wiretapping cases, the Secretary for Security Wong Sio Chak, stated while introducing the new bill of Telecommunication Interception and Protection Legal System.

“The security departments don’t know the number and only with the Court’s approval should we be able to collect this data,” said Mr. Wong during a press conference on Wednesday. “It also relates to security confidentiality.”

The bill suggests that the Court oversees the system of intercepting telecommunications for investigation, with the Secretary remarking the body is independent from the public administration.

The bill also proposes that security departments, in particular the Judiciary Police (PJ), must obtain approval from the Court in order to intercept any information from any person’s telecommunication record.

“If residents have any doubts, they can file a complaint to the PJ or the Commission Against Corruption (CCAC),” the Secretary said.

The bill, which would be an individual legal system, was proposed in order to meet legal needs of a fast-changing society, with technologies advanced in the past decades, according to the Secretary.

The head of the PJ, Sit Chong Meng, explained that the request for interception would only be allowed for 10 different crimes. Those include crimes related to national security, crimes subject to more than three years of imprisonment, terrorism, money laundering, cyber crimes, human trafficking, organised crime, trade of arms and anesthetic drugs and using communication technologies to insult, threaten or trespass residences and private lives.

A request of interception would last for a period of three months, but the security department could make requests for another three months if necessary.

Wong said there would be no cap on how many times of request be made, noting that many countries in the world do not set a cap for such requests.

On the other hand, the bill stated that telecom service providers in the city are obliged to cooperate with authorities when requested and to store telecommunication records for one year.

The bill underscored that any telecommunication content would be erased after that one year period and not stored.

The Secretary also affirmed that foreign telecommunication service providers will be subjected to the regulations in question, noting that requests for tapping records from foreign service providers for investigation rely on signed or to be signed co-operation agreements with other regions.

Service providers would be penalised if they refuse to cooperate, the bill indicates.

The Secretariat for Security is currently collecting public opinions for the bill, with the consultation period to end on November 9.