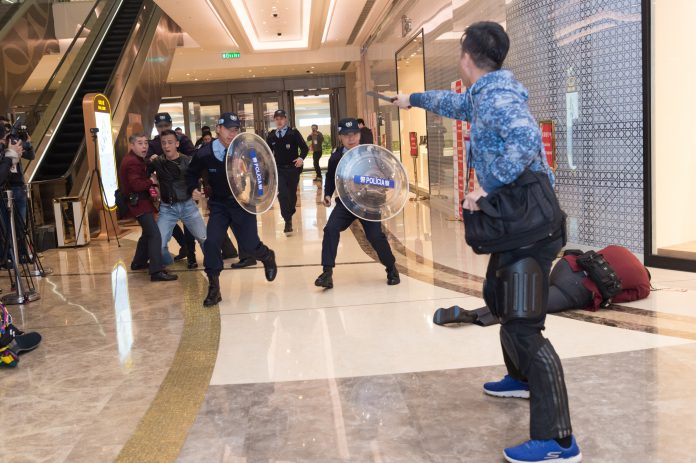 The drill – run under the name of ‘Wolf hunt’ – took place in the early hours of Tuesday and simulated an incident in the casino property of Galaxy Entertainment Group. The DICJ, Unitary Police Services (SPU), Public Security Police Force (PSP), Judiciary Police (PJ) and Firefighters Corps (CB) participated in the exercise.

The drill simulated an attack by four people using bladed weapons threatening one individual, in the description that follows. After the fictional attack, the ‘criminals’ tried to escape through a reception hall full of people, with two of them avoiding the interception action by the in-house security guards. During the escape, they hurt two people and warned they had explosives, as the drill went on. The simulated situation caused panic among people in the hall with several tourists hurt by falling during the chaos.

Then, the Special Patrol Group of the PSP arrived at the casino and arrested the attackers. Meanwhile, in-house security informed the DICJ and PJ, and activated the mechanism of shared-command for massive incidents, evacuating people as planned.

Upon arrival, the PJ, PSP and CB created a joint command. They also isolated the location in order to treat injured people, disarm the suspected explosive device and investigate.

The DICJ also informed the operators so that they could implement the necessary security measures and help the PJ identify the two escaped criminals.

The attackers then took hostages to confront the police. The PJ sent in the Crisis Management Group which, after analysing the situation, decided to call the Special Operations Group of PSP, finally arresting the attackers, and releasing the hostages.

The DICJ said the drill had achieved its target goals with an ‘efficient outcome.’

It is the first time this kind of drill has been put to the test in the MSAR.

The mechanism was developed after a meeting of DICJ with the local gaming companies, and promoted as a reaction to last year’s shootings in gaming resorts in the Philippines and Las Vegas, and was deployed for the first time during Typhoon Pakhar.

The gaming watchdog also mentioned in the note that there was a valuation process regarding internal control procedures conducted in the casinos during last year.