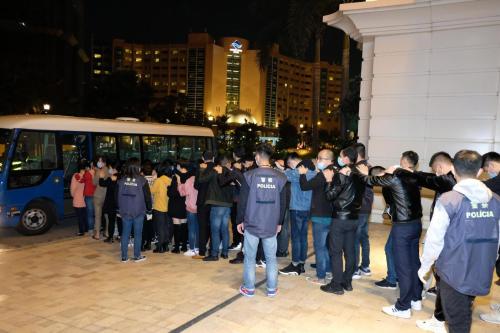 Macau (MNA) – The Macau SAR Government expressed ‘regret’ towards the United States Department of State Trafficking in Persons Report of 2019, commenting that it did not reflect the current situation in Macau and that it continued to make a biased interpretation and draw untrue conclusions through unfounded allegations.

Macau’s ranking in the report is higher than last year, from tier 2 watch list to tier 2, but the Office of the Secretary for Security still did not agree with the report’s content, expressing its displease in an official statement.

The US report considered that the Macau SAR government did not meet the minimum standards in several key areas, as the SAR identified only one victim but did not utilize its trafficking law to prosecute the traffickers, and had never obtained a conviction for labor trafficking.

The report recommended the SAR government to significantly increase efforts to investigate, prosecute, and convict sex and labor traffickers through trafficking law.

The US also suggested that Macau provide training on the use of the trafficking law to prosecutors and judges, as well as improving and consistently implement proactive victim identification methods, especially among vulnerable populations such as migrant workers and people employees in prostitution.

Besides, the SAR should increase efforts to screen and identify labor trafficking and male victims, while instituting a minimum wage for foreign domestic workers.

Human trafficking in the city

Although the SAR government initiated several prosecutions and convicted two sex traffickers in 2018, the first convictions since 2014, the US Department of States criticized the Macau authorities used the ‘pimping of minors’ statute and did not prosecute any cases under this trafficking statute, which carried higher penalties.

According to the report, observers reported prosecutors and judges often believed trafficking crimes must involve organized groups or evidence of physical force, while authorities did not report any investigations, prosecutions, or convictions of officials complicit in trafficking offenses.

Many trafficking victims respond to false advertisements for jobs, including in casinos in Macau, but upon arrival, traffickers force them into prostitution.

Victims are controlled in massage parlors, illegal brothels, apartments, and houses and are closely monitored, threatened with violence, and forced to work long hours.

Traffickers also confiscate victims’ identity documents and bring foreign workers to Macau to renew work visas for other countries while restricting their movement and withholding their passports.