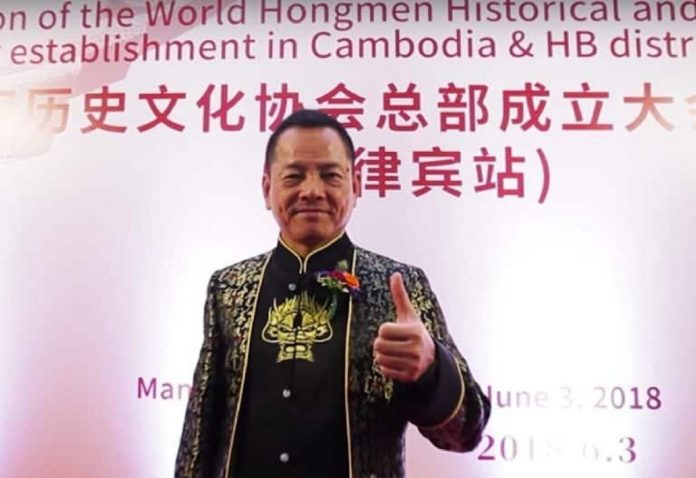 Malaysian police authorities are considering to ask Interpol to issue a red notice former triad leader Wan Kuok Koi, known as Broken Tooth, due to some of his business dealings in the country, the Strait Times reported.

In November, 2020 the US Treasury imposed sanctions not he now businessman Wan Kuok Koi alleging he was expanding criminal activities throughout Southeast Asia on the back of a major Beijing infrastructure initiative.

The former alleged head of the 14K triad, has accused of developing criminal operations in Cambodia, Myanmar and Palau since being released from Macau prison in 2012.

Wan spent 14 years behind bars in Macau related to a string of murders and bombings in Macau, before being released.

US authorities also placed sanction on an association founded by Wan, the World Hongmen History and Culture Association, and Wan’s Hong Kong-based Dongmei Group which is building a casino hub town in Myanmar called the Saixigang zone.

This week Singapore newspaper The Straits Times reported that the 65-year-old was also included on the Malaysian wanted list since October, 2020 for gangsterism and fraud amounting to RM6 million after he failed to transfer shares of public-listed Inix Technologies Holdings Berhad to a third party as agreed.

Wan was appointed non-executive chairman of Inix last August and resigned four months later on December 2, with Malaysian authorities also investigating share price manipulation relating to Inix, following unusual trading activity in the company’s stock around the time Wan was appointed to the board.

Malaysian Inspector-General of Police, Tan Sri Abdul Hamid Bador, said Wan was known to be in the country from 2019 up to last year on business, but that after a police report was lodged against him over a RM6 million fraud, he disappeared.

“So far, checks with the Immigration Department showed that the man left the country for Hong Kong on March 18 last year. We have not been able to trace his location since. […] If it is true he is continuing his activities in Malaysia, we will arrest him,” Tan said to Malaysian media.

Meanwhile, Malaysian police are also in the process of listing the man’s name on the Interpol’s wanted list through a red notice.