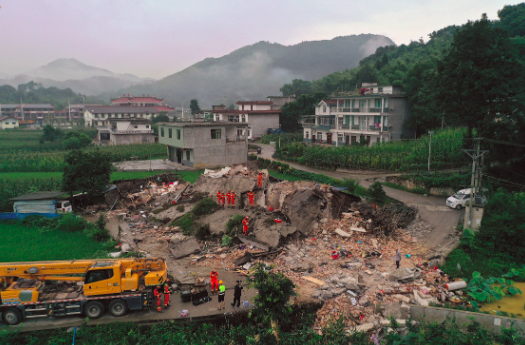 The outbreak of an earthquake of a magnitude of 6.0 at Yibin in China’s Sichuan province on the night of June 17, which caused the death of 13 people, and then an aftershock of a magnitude of 5.4 on June 22, which left some 30 people injured, again tested the ability of the government of the People’s Republic of China (PRC) in responding to natural disasters.

Compared with the way in which the Chinese Communist Party (CCP) tackled the 2008 Sichuan earthquake, the response of the CCP this time has been swift and effective, displaying significant continuities and changes.

First and foremost, as the Chairman of the Central Military Commission, the PRC President Xi Jinping, just like President Hu Jintao in 2008, immediately issued an important directive on June 17 to demand the mobilization of the People’s Liberation Army (PLA) and the People’s Armed Police (PAP) to enter the disaster areas to rescue the victims, to evacuate them, and to provide relief to them within the golden 72 hours.

At the same time, Premier Li Keqiang issued another directive to ask government departments concerned to cure and take care of the earthquake victims, to repair roads and transportation facilities, to provide information on the disaster promptly, to maintain law and order in the affected areas, and to prevent further damages in view of the coming heavy rainfall.

The mass mobilization of the rescue teams was swift and mature, showing that the CCP, the government, the PLA and the PAP learned considerably from the 2008 experiences. Although 140,000 citizens were affected by the earthquake after June 17, the governmental response was calm and systematic.

Second, as with many affected areas in the 2008 Sichuan earthquake, the earthquake on June 17 wreaked havoc to many places, which forced the PAP officers to walk into the damaged regions to rescue the victims.

On June 18, hundreds of houses collapsed whereas some 10,000 houses and buildings were damaged. At least 4,200 people needed to be relocated at once.

Third, the rescue efforts were marked by the swift dispatch and construction of makeshift tents for the victims, a move parallel to the situation immediately after the 2008 Sichuan earthquake.

This common rescue pattern showed that the Chinese government learnt from the previous experiences in dealing with earthquakes. The provincial government of Sichuan cooperated with the Red Cross and sent 5,000 tents and 10,000 foldable beds to the affected areas on the night of June 17, demonstrating a close public-private partnership in the rescue efforts as with the aftermath of the 2008 earthquake.

Fourth, the mobilization of the PLA and militias were quick. Immediately after the outbreak of the earthquake, Yibin mobilized 760 PAP officers, 526 firemen, 1,283 militias, 172 mine rescue workers to the affected areas. At the same time, seismic officials from Sichuan, Chongqing and Yunan sent a combined special 68-member rescue unit to the scene.

The changes in the governmental and party responses were noteworthy.

First, seismic authorities said that they could predict the June 17 earthquake about 61 seconds prior to its outbreak. They claimed that this could really help minimize the human costs, including deaths and injuries.

Prior to the earthquake, alert sirens were broadcasted so that people could escape from their buildings to spacious areas. Many citizens received the earthquake alert messages through their mobile phones and television broadcasts, thus facilitating the evacuation process of school children of some 180 schools in the city of Chengdu.

Unlike the 2008 earthquake in which the Chinese government failed to detect its occurrence beforehand, the June 17 earthquake in Yibin witnessed the successful early detection of its outbreak – an indicator of much better prevention and then responses.

Second, different types of drones made by DJI technology, like M200 and 4RTK, were used to fly into the affected earthquake areas and detect the seriousness of the damages so as to provide updated information for the rescue efforts.

The use of drones as an instrument of rescue and detection was unprecedented, unlike 2008 when drones were absent in the Sichuan earthquake. The DJI technology said that it had designed an emergency response mechanism in dealing with the occurrence of earthquakes.

Obviously, the use of technology in response to earthquakes has made strident improvement in 2019 compared with the circumstances in 2008.

Third, some local critics in online forums argued that the earthquake might be attributable to serious and extensive fracking at the Changning shale gas block. But the official authorities denied this and maintained there was no evidence to prove such a claim.

Fourth, the number of aftershocks in the June 2019 earthquake appeared to be more intensive than the 2008 earthquake. Eight counties reportedly suffered from seventy-seven aftershocks from June 17 to 18, leading to the injuries of some 200 people.

Fifth, with the rapid advancement of technology, the Sichuan People’s Hospital employed 5G to deal with the transport, inspection and diagnosis of some injured citizens. The utilization of 5G in response to the injured citizens in the 2019 earthquake was unprecedented.

Sixth, the earthquake shelved a plan in 2017 that Yibin would consider building a nuclear power plant due to the relative lack of coal and electricity in Sichuan province. But given the fact that in 2018 alone, there were 91 earth movements recorded in Sichuan and 33 of them took place in Yibin, the city of Yibin obviously is not suitable for the construction of any nuclear power reactor.

Seventh and finally, President Xi Jinping displayed great confidence in the governmental responses to the Yibin earthquake and he continued with his visit to North Korea on June 20, leaving the tasks of the rescue and relief efforts to be conducted and monitored, respectively, by the military and the State Council under the leadership of Premier Li Keqiang. The entire response demonstrated the confidence of the Party-state together with the PLA and PAP.