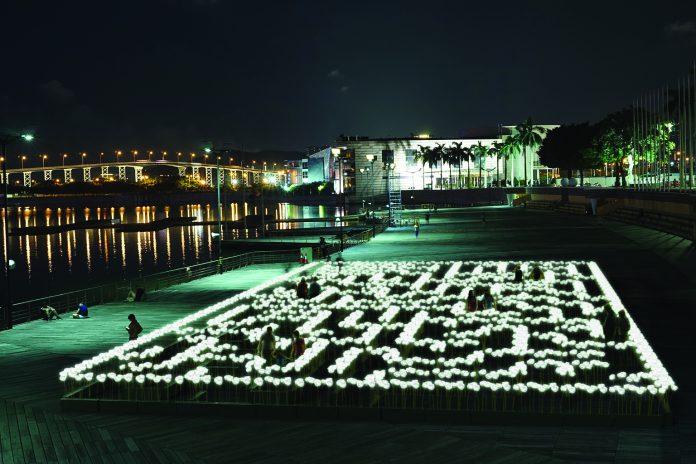 Photos by Leong Sio Po and from Macau Design Centre

From two mazes comprising nearly 10,000 rose-shaped lights to three projection mapping shows at Macau’s landmarks to light animations at restaurants, the city captures the festive spirit of this month with a series of jubilant light installations and offerings illuminating, it seems, every street and corner.

It is the Macau Festival of Light, an annual event organised by Macao Government Tourism Office since 2015, and created by over 20 local cultural creative companies led this year by Macau Design Centre. Adopting a theme of ‘Amor Macau’ – meaning love in Portuguese –  this locally produced event seeks to grace residents and travellers with illuminations and shows depicting the city’s rich historical and cultural background, as well as serving as a platform to showcase local talent.

In addition to light installations, shows and interactive games at eight main designated attractions from Senado Sqaure to Taipa Houses portraying various stories of love the latest edition of the Festival boasts an array of new activities; namely, a lighting exhibition for spectators to enjoy the illuminations in the daytime, three music shows by local bands, and a local film screening.

In celebration of the territory’s recent designation as Creative City of Gastronomy by the United Nations Educational, Scientific and Cultural Organization (UNESCO), the Festival, with a budget of some MOP18 million (US$2.25 million), is also arranging light projections at two local restaurants for diners to enjoy their meals while appreciating the beautifully crafted illuminations throughout the month. The Festival shines from 7:00p.m. to 10:00p.m. every night from 3rd to 31st December.

James Chu, Director of Macau Design Centre, emphasises that this year’s Festival is imbued with the city’s centuries-old history, with the installations making good use of the unique environment of the eight locations to illustrate the theme ‘Amor Macau’. For instance, the feast of lights in Camões Garden recounts the 400-year history of the garden, which Portuguese poet Luís de Camões briefly visited over the course of two years to compose his legendary poem The Lusiad.

“The light elements at the eight locations each have their unique characteristics,” the designer emphasised. “We don’t only want audiences to simply appreciate the installations; [we’ll] also cater interactive games for them to play.”

On the city’s iconic Ruins of St. Paul’s landmark an 8-minute projection mapping show will be play on the façade seven times a night this month, exhibiting the city’s evolution from a small fishing village to today’s ‘world centre of tourism and leisure’, rendering the outlook of the heritage site in the past. Festival-goers can also get involved in an interactive game, taking selfies to upload on the Festival mobile app, which will later be displayed on the façade.

Walk on to St. Lazarus Church and Calcçada da Igreja de S. Lázaro, the first time the district will be covered by the Festival of Light, to find another projection mapping show reflecting the history of St. Lazarus Church – which used to care for lepers – coupled with an interactive installation that converts the images of passers-by into stained glass paintings.

Mr. Chu says Anim’ Arte Nam Van, a cultural and leisure hub in Nam Van Lake, is another attraction this year, rolling out a wide array of offerings besides the St. Lazarus Church area. From light installations of horoscopes and lighting balls to three music shows and a screening of the movie Macau Stories 2 – Love in the City, the audience – in particular kids and youngsters – are guaranteed a great time.

In the vicinity of Anim’ Arte Nam Van, visitors can indulge in a sea of LED roses in Nam Van Lake Nautical Centre: two mazes for adults and kids to enjoy themselves in. “The total size of the mazes is about 16 metres times 40 metres, possibly the largest mazes made up of [LED] roses in Asia,” said Mr. Chu. “We will change the entrances and exits every week so that visitors can have a new experience.”

Another highlight of this year’s Festival is its ‘local touch’, with the production team comprising more than 20 local firms and 100 local artists and professionals. “Not many locals could participate in the production of the Festival in the past two editions,” Mr. Chu noted. “This year, we emphasise that the event is exclusively produced by local talent, with Macau Design Centre serving as a leading entity because no single local company comprises so much talent to take on the project.”

Days after becoming Secretary for Social Affairs and Culture at the end of 2014, Alexis Tam Chon Weng led an official team to meet with local designers and artists at Macau Design Centre, Chu recalls: “We suggested at the time that Macau could learn from other jurisdictions to organise a light festival,” he said, although his previous bids failed to secure a contract until the third edition.

“The government has put a lot of capital into this Festival, which should offer opportunities for locals to showcase their skills and provide room for the development of the industry,” Chu remarked. Cultural creative products and souvenirs of the Festival, produced by local artists, are also on sale at the eight locations this year.

Hugo Ao, Director of Novae Production House Co. Ltd., also suffered from futile bidding for the production services of the first two editions of the Festival. “This time, I feel like the locals finally have a chance to participate in this project,” he said. “With so much input from the government, it makes sense to give a platform for local artists to enhance their expertise.”

“We can apply our past experience and knowledge to the show this time,” he smiled. But it still took time for the team to come up with graphics and animations that fit the structure of the heritage site. “It’s totally different from simple video projection: if we hadn’t considered the structure [of the Ruins of St. Paul’s] the mapping projection wouldn’t have looked as nice [as it does now],” he added.

Hugo Chang Chi Hin, Design Director of CRAXH Multimedia Productions, is also grateful he has an opportunity to join the Festival this time. His company is behind the development of the mobile app for the event, which allows users to upload their selfies and turn their image into an avatar that can be projected onto the Ruins of St. Paul’s. Residents and visitors can also use the app to find more information about the Festival and collect a ‘Puzzle of Love’ at each of the eight designated locations, which they can later exchange for souvenirs.

“It’s rare for our company to engage in a project of this scale,” he remarked. “We have never developed an app function involving users to upload a photo and turn it into projection. This means a new challenge for us.”

Festival of Light may attract 300,000 visitors

With a wider coverage and more activities, the Macau Festival of Light this month may attract about 300,000 visitors, says organiser Macao Government Tourism Office.

With the launch of the event in 2015, the tourism office said the goals of the Festival were ‘to attract visitors to different districts of the city for an appreciation of local culture and history from innovative angles shaped by light artistry.’

‘The event also aims to extend the length of visitors’ stay and boost the economic benefit[s] brought to local businesses, while tapping into the potential of cultural tourism by cultivating the cultural creative industry in Macau,’ it continued.

Following the conclusion of the second edition of the Festival last year, a survey found that the overall level of awareness, satisfaction and support for the event among residents, merchants and visitors remained high. With an attendance of some 200,000 spectators last year, the tourism office hopes the figure can grow 50 per cent – or 100,000 more spectators – this year.

There are 10 mosaic tile paintings on the floor of the garden, often overlooked by visitors, which represent 10 chapters of the epic poem – The Lusiad – composed by Portuguese poet Luís de Camões during his visits to the garden in Macau more than 400 years ago. An extravagance of lights is utilised to highlight the 10 tile paintings, leading to where Camões was said to have written his masterpiece centuries ago.

‘The Lighthouse of Life’ at St. Anthony’s Church

A projection mapping show speaks of the stories of love and history of the church, where the Portuguese used to hold wedding ceremonies in Macau in the distant past. The show also recounts a story of the 1870’s: when a storm left Macau in complete darkness, a fire coincidentally broke out in the church that miraculously served as ‘a lighthouse’ for many fishing boats returning home.

‘Mercy and Love for All’ at St. Lazarus Church and Calçada da Igreja de S. Lázaro

Spectators can enjoy a projection mapping show that takes them through a journey across time and space to experience the kindness and love of the church for humanity. A heart-shaped installation and an interactive offering for the audience to project their messages can also be found in the district.

‘Boundless Love’ at the Ruins of St. Paul’s

An eight-minute projection mapping show is divided into five parts showcasing the eight attractions of this year’s Festival, the history of Macau as a major hub of the Maritime Silk Road, the cultural background of the complex in the past, and love stories from a man and a woman that transcend race and national boundaries. Visitors can also display their own avatar upon the Ruins of St. Paul’s via the event’s mobile app.

The hub at Nam Van Lake transforms into a playground for youngsters and families to revel in with three music shows and a local film screening each Saturday throughout the month, coupled with lighting balls and other installations.

‘The Maze of Flowers’ at Nam Van Lake Nautical Centre

One of the highlights for this year’s Festival is two mazes comprising nearly 10,000 LED roses, immersing families and couples in a sea of magnificence. The event’s production team say the mazes – measuring 16 metres x 40 metres – are the largest mazes of LED roses in Asia.

‘Love Stems from the Heart’ in Senado Square

In collaboration with the annual Christmas decorations by the Civic and Municipal Affairs Bureau, a row of heart-shaped illuminations has been installed to lead visitors through their journey of love and life.

‘Happy Homestead’ at the Taipa Houses

A starry sky is prominent in the design of the installations in this part – when spectators look up at the sky they will see spectacular light displays and even have the opportunity to appreciate real stars.