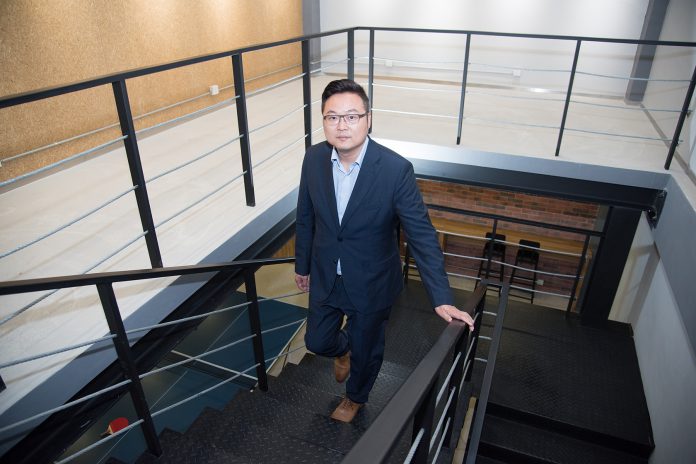 Local businessman Andy Szeto knows all too well the hardship of entrepreneurialism – only after three futile attempts to launch outdoor advertising and other businesses did his fourth attempt finally deliver. Established in 2004, Tenco Advertising Ltd. has gradually become one of the largest outdoor advertising firms in the territory, a part of his business empire stretching into other fields like real estate investment and retail under the umbrella of the Cowin Group conglomerate.

“We have witnessed and benefited from the rapid development of Macau in the past decade from 2005 to [2014],” said Mr. Szeto, chairman of Cowin Group. Understanding the adversity of launching a business, as well as addressing the government’s call for economic diversification, his company has taken the leap to invest in providing office space for cultural creative companies, particularly start-ups. Now managing a MOP150 million-plus (US$18.67-million) office property portfolio in the city, the cultural arm of Cowin Group is seeking to double its size – assuming, in the process, a more active role in facilitating the development of the cultural creative industry and entrepreneurship here.

The Administration’s push for the cultural creative industry as a means of economic diversification has given rise to numerous cultural creative and entrepreneurial platforms in recent years, in which companies and individuals can share resources, namely office space. 678 Cultural Creative Park, an eight storey industrial building-cum-cultural hub, was established by the Cowin Group near the Border Gate in 2012, the company’s earliest project in addressing the space demands of local cultural creative firms.

In the wake of the success of 678 Cultural Creative Park, Mr. Szeto’s firm launched more projects over the past five years and now runs eight similar platforms across Macau, including Macau Brand Incubation Centre, which opened this year in Taipa, and the soon-to-open MF & Cowins Collection, a nine storey property in Areia Preta. The total area of the company’s cultural properties amounts to over 300,000 square feet.

Survival of the fittest

“Looking at other places such as Shenzhen and Guangzhou; they emphasise a rich ambience of entrepreneurialism,” said Mr. Szeto in an interview in mid-November. “This atmosphere may take five to 10 years to form but it is important to provide [office] space for start-ups and companies.”

In the early stage of 678 Cultural Creative Park, a third of its tenants had been replaced by new companies after a year, given their inability to remain competitive in the market. “We call this survival of the fittest but the situation is getting better,” he remarked. “Most companies can now maintain stable operations in many fields such as design, production, interior design, consultancy and so forth.”

“The total occupancy rate of [the eight projects] now stands at 84.5 per cent, which is an acceptable result, but my target is to hit 90 per cent soon, hopefully by year-end,” the entrepreneur noted. “Our projects are scattered across Macau – namely the Border Gate, Areia Preta, Nam Van and Taipa – and provide office space and commercial space of different sizes, in which companies can find one that fits them best.”

Cowin Group has so far invested MOP150 million in acquiring or renting properties for the eight projects, forking out another MOP50 million for property renovation. “There are many factors we need to look at when turning a property into a cultural creative zone, such as the availability of car parking spaces, convenient transportation, and presence of nearby restaurants,” Szeto explained. “Also, if we rent a property, the lease must last for at least 10 years for stability.”

In contrast to other Cowin projects, he said these cultural creative hubs take more time to break even with an annual yield of only 5-10 per cent. “The investment amount is not small, so it takes commitment and time,” the businessman observed.

Of the eight projects in the city, only the Macau Brand Incubation Centre has been subsidised by the government with grants of MOP13.86 million from the Cultural Industries Fund. The official institution, established in 2014, has provided subsidies and loans of MOP263 million for 133 projects as of October, including nine platforms like the Macau Brand Incubation Centre.

Acknowledging more competition in the market of providing office space for cultural creative enterprises and start-ups, the Cowin chairman believes simply offering physical space is not enough to entice tenants anymore, and that there should be more enhanced services. For instance, tenants in the Macau Brand Incubation Centre can share meeting rooms and recreational areas, while there will be regular talks, seminars and roadshows with interested investors held in the venue.

Looking beyond the territory, the company also operates similar hubs occupying about 600,000 square feet across the border in Zhuhai, bringing the total area of the portfolio of the company’s cultural arm in the two cities to almost 1 million square feet.

“We aim to make more acquisitions in the future to double the size in Macau to 600,000 square feet, which we think will be enough to meet market demand,” Mr. Szeto remarked, adding the company also wants to double the size of its portfolio in Zhuhai. “Our portfolio in the two cities should hit 2 million square feet in the future in a half-half mix of self-owned and leased properties.”

Besides more acquisitions, the group aims to take a more active role in facilitating the development of the local cultural creative industry. “We hope to create three platforms for the local industry: one is the entrepreneurial platform that we’ve been doing for providing [companies with] office space,” he explained.

“The other two are a platform for local brand incubation and one for financial funding,” he continued. With regard to the latter two, the Cowin Group has not only set up Macau Brand Incubation Centre focusing on grooming local original brands but will also create its own jewellery and watch labels.

“After a few years, we should ask whether the existing subsidies from the government for cultural creative companies are enough. Do they need more capital for business expansion? There is a lack of [angel investors] in the city, an area in which we aim to work,” the businessman said, referring to individuals or funds providing capital for start-ups, usually in exchange for ownership equity, convertible debt or other incentives.

The company recently established a private equity fund with initial capital of MOP20 million for investments in cultural creative start-ups in Macau and Zhuhai. “The size of capital is not big, so we will also invite other large-scale funds in Shenzhen and Guangzhou for roadshows to be held in [Macau Brand Incubation Centre],” he said. “We trust their visions and can follow their lead in investments.”

With his previous failures of entrepreneurship behind him, his advice to cultural creative start-ups is simple: keep trying. “You have to find a field that you are familiar with to start a business – as well as the best timing – [because] there’s not much you can do when you started out during the times of SARS,” he said, referring to severe acute respiratory syndrome, a virus that hit southern China in 2003 and dampened the business climate in the region.

“The key is perseverance despite failures,” he stressed. “Sometimes you can’t be successful at the first attempt in entrepreneurship; you may only succeed after five or six times.”

In contrast to the times he ventured out in the aftermath of SARS, Mr. Szeto believes more opportunities exist for cultural creative firms amid the city’s further integration with the Mainland and the development of the Guangdong-Hong Kong-Macau Greater Bay Area.

“Prospects are bright,” he ventured.

The earliest project founded by Cowin Group is located near the Border Gate. Providing office space of over 126,000 square feet for more than100 companies, the eight storey industrial building-cum-cultural hub has been highly sought after by companies since its establishment five years ago.

An 18,000-square foot area on the sixth floor of 678 Cultural Creative Park, it is dedicated, in particular, to start-ups.

A 17,000-square foot office space on the seventh floor of 678 Cultural Creative Park, it emphasises an open and comfortable business environment for tenants.

Located on two floors of a downtown commercial building in Nam Van district, the Centre provides 33 office units for companies such as IT firms.

Formerly a nine storey industrial building, it is now a cultural creative hub providing office space of over 68,800 square feet for start-ups and cultural companies.

A five storey building occupying more than 53,400 square feet in Taipa, it offers office units ranging from 500 to 800 square feet. Compared to other Cowin projects it offers a commanding sea view.

Situated on the fourth and fifth floors of Poco Cultural Centre, the Centre, launched this year, provides 25 studios exclusively for Macau’s original brands and labels.