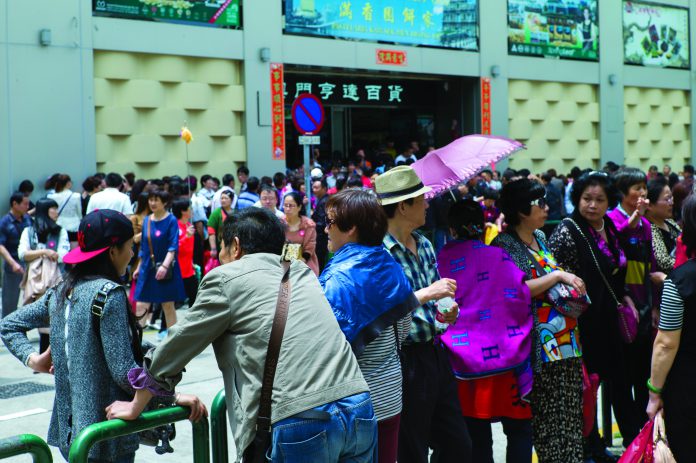 Tourism carrying capacity has been a common catchphrase during the discussions of local tourism in recent years; in particular regarding the 2013-14 period when the city’s tourist arrivals broke the 30-million threshold. Amid the ongoing complaints of residents about the impact of tourism upon their lives and transportation, they now face a daunting prospect: more and more travellers will arrive in the coming years.

With a projection of receiving up to 40 million visitors annually by 2025, industry observers and academics suggest the city should tackle zero-fare tours and infrastructure as well as enhancing collaboration among different government departments to accommodate the influx of visitors – although some remind that the city should keep its eye on pursuing the growth of quality rather than quantity tourism.

In the long-awaited Macau Tourism Industry Development Master Plan unveiled in September, Macao Government Tourism Office put forward eight key objectives, 33 strategies and 91 short-to-long term action plans to ‘ensure the sustainable and diversified growth of [sic] Macau’s tourism industry’.  The 300-page report, in the making for two years, forecasts that the number of visitors to the city could grow from 30.95 million last year to 33-35 million by 2025 in the low range of estimate or to 38-40 million in the mid range of estimate.

According to a survey conducted for the report, residents are dissatisfied with the tourism carrying capacity of the city’s transportation, public facilities and infrastructure, finding: ‘Transport is of most concern, where the majority of residents expressed that there is overcrowding of cars and people, roads are always under construction, and residents find it difficult to ride on public transportation’.

It did note, however, that the city could handle more travellers in the future ‘with efficient management’.

“One of the major problems is that the main tourism areas here are too crowded,” the academic noted. Developing new tourism products such as theme parks and marine tourism products per suggestion of the master plan could help divert tourist traffic from crowded sites, he agreed. These new offerings should complement rather than compete with existing tourism elements in neighbouring regions like Hong Kong and Hengqin, observed Prof. Zeng, saying, “Macau should make good use of its gaming industry in attracting travellers with mid-to-high consumption powers”.

With regard to tourism carrying capacity – the optimal number of visitors Macau can handle without dampening the environment and residents’ quality of life – he said that any significant hike in visitation figure will not be appropriate in the future should the city’s facilities and infrastructure remain unimproved.

“Any rise in tourist arrivals will impose pressure upon the city’s traffic, road conditions, human resources in the service industry, and so forth,” said Prof. Zeng. “Macau should focus on pursuing the quality rather than the quantity of travellers”.

“The government has attempted to introduce eight walking tour routes to divert visitors from the crowded tourism attractions to [less visited] neighbourhoods but the routes have so far remained unappealing,” she said. “Diverting travellers to neighbourhoods without sufficient support does not only dampen the experiences of travellers but also the quality of living of residents.”

“With its limited size of 30 square kilometres, Macau now receives 31 million visitors a year, representing tremendous pressure on the city’s traffic, World Heritage sites, land resources and consumer prices,” added Ms. Song. “There have been calls over the years for the government to attract more quality and international travellers to Macau while cracking down on zero-fare tours in co-operation with Mainland China.”

Zero-fare tours, or low-fare tours, refer to package tours in which travellers pay low or no fee: although they do not cover tour costs they are later asked – or forced – to spend at designated stores from which travel agencies profit. In general, this phenomenon occurs on tours from the Mainland, prompting Mainland authorities to implement its first tourism law in October 2013 banning travel agencies from organising package tours at ‘an unreasonably low price’ and disowning activities in the itineraries that impose additional charges upon visitors.

The number of zero-fare tours to Macau from the Mainland has declined following the enforcement of the law and the more diversified mode of travel in the Mainland, but queues of tourists can still be seen outside jewellery and souvenir stores in areas like the northern district. According to official figures, the number of Mainlanders travelling to Macau on package tours hit a peak of 8.9 million in 2014 prior to slipping by nearly one-third to 5.98 million last year. In the first three quarters of this year, the number of Mainland tourists on package tours increased 11.7 per cent year-on-year to 4.77 million, data reveals.

Andy Wu Keng Kuong, president of the Macau Travel Industry Council, acknowledges the existence of zero-fare tours in the city, adding the number, however, has been relatively fewer compared to the past. “This kind of practice dampens the interest of consumers and the industry, and should be cracked down on,” he remarked. “The tourist market has become more mature . . . and consumers will opt for quality tourism services”.

The recently announced tourism master plan recognises that the city’s tourism image would be ‘affected by low/zero-fare tours where visitors are forced into scams’, while it underlines the predicament for the Macau authorities of tackling this malpractice. Mainland visitors only sign contracts with Mainland tourism operators, not with Macau agencies that only sign contracts with Mainland operators.

‘Since Mainland China tour operators are not governed by Macao regulations, complaints received [from package travellers] will be transferred to related Mainland departments,’ the document reads.

Given this plight, the master plan proposes local regulations for tour guides and travel agencies be updated. Macao Government Tourism Office has, indeed, said in a reply to legislators’ enquiries earlier this year that they had conducted consultations on amendments to the law on tour guides and travel agencies, which will mandate any local agencies not receive tours to Macau at tour fees lower than cost.

It did not confirm when the amendments would be deliberated upon in the Legislative Assembly, only reiterating it would conduct more promotions for travellers warning of the downside of zero-fare tours, as well as collaborating with neighbouring authorities to clamp down on such malpractice.

Mr. Wu is not worried the city cannot handle 40 million travellers a year by 2025. “It is not a drastic but reasonable [forecast] growth,” the travel council president said. “[The problem is] the government has not done well in areas like traffic, border facilities, and diverting visitors from crowded sites.”

“Many problems and solutions in the [master plan] have been proposed by the industry in the past decade, such as diverting travellers from entering and leaving Macau via the Border Gate to via [the border terminal] on the Hengqin side,” he explained. “But the Macao Government Tourism Office alone cannot resolve all these issues, requiring co-operation from other government departments”.

Gaming executive and legislator Angela Leong On Kei is also anxious about how various government departments would work together to implement the tourism master plan. “With the opening of the Hong Kong-Zhuhai-Macau Bridge soon more tourists will travel to Macau, a new influx that the government should think about how to handle as soon as possible,” she warned.

One of the highlights of the master plan is the use of innovative technology enhancing the experiences of visitors and managing crowds at tourist sites. ‘Technology has the ability to take the concept of travel management to the next level,’ the document reads. ‘Updating current technology and deploying smart technology tools will see extended benefits for both visitors and the tourism industry of Macau in the . . . short to long term’.

New technologies, such as heat maps, will be employed at tourism sites to monitor human traffic flow so that visitors can be notified via mobile messages and social media platforms and may choose to avoid visiting certain areas at peak hours, according to the document. The Macau Administration inked an agreement in August with Mainland technology giant Alibaba Group to help transform the city into a leading Smart City in the region. The four-year partnership focuses on upgrading the territory’s information technology infrastructure to facilitate development in various areas from cloud computing to smart tourism.

Liu Yi, lecturer at the School of Tourism Management at Sun Yat Sen University in Guangdong Province, says Macau’s smart tourism could focus on providing virtual reality (VR) and augmented reality (AR) experiences for travellers at tourism sites. “With an abundance of heritage resources in a small city, it is not really necessary for Macau to develop any large-scale tourism offerings,” he said, having recently visited the city for a tourism seminar.

‘While the master plan gives a clear roadmap with objectives and strategies, it takes leadership to drive the tourism industry for sustainable development and growth,’ the 300-page document concludes.