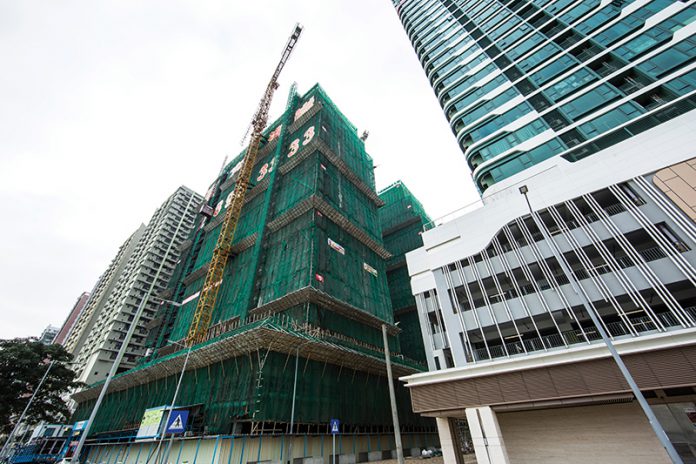 A month after Chief Executive Fernando Chui Sai On announced that the authorities would intervene in the red-hot property market with new measures to clamp down on rising prices the city has yet to glean any news from the government – although developers’ omnipresent marketing campaigns and real estate agencies advocating their inventories before the curbs come into force are much in evidence.

“It’s inconceivable it has taken a month without any news,” says legislator Ho Ion Sang. “The government should have launched the measures promptly; otherwise [the announcement] will only disturb the market and induce some residents to buy homes hastily.”

Although “this will only push the price to a new high,” opined the legislator, he nevertheless understands the perspective of developers capitalising on this window of opportunity to put their inventories on the market.

In the wake of the disclosure by Mr. Chui on December 15 the market has braced for the Administration to introduce a basket of measures from tightening mortgage lending to possible new taxation standards for empty flats and homeowners with multiple flats, a more comprehensive cooling package than that unveiled last May when it simply tightened the loan-to-value ceiling for property mortgages.

As at the time Macau Business went to press, the authorities have yet to reveal details of the measures, which are still in the process of formulation.

In the face of government intervention, at least three developers launched the presales of their unfinished residential projects in January. They include:  Grand Oasis, a 318-flat high-end project, part of the 4,000-plus parcel of luxury flats in Cotai developed by Empresa de Fomento Industrial e Comercial Concórdia, SA; Praia Park, a project comprising 1,850 flats in Seac Pai Van developed by New Hong Yee Investment Company Ltd.; and Waterfront Duet, comprising some 1,000 homes near the Macau Yacht Club in Fai Chi Kei.

Chong Siu Kin, chairman of Dong Fu Ye Property Development Co. Ltd., developer of Waterfront Duet, declined to comment upon the presale, noting only that sales had “not matched his expectations”. Asked to comment about the time the authorities have taken to introduce the curbs, he said it was “too sensitive to talk about”.

According to market sources, the developer launched a bunch of studio flats, which make up about 60 per cent of the project that offers homeowners yacht facilities and services, on the first weekend of the presale. But the studio units, priced at about MOP10,000 (US$1,250) a square foot on average, have met with muted response, forcing the developer to put more two-bedroom and three-bedroom apartments on the market.

This magazine asked New Hong Yee Investment Company Ltd. to comment upon this story but had received no reply by press time. Executives at the developer told Chinese language newspaper Macao Daily News it had put 500 homes on the market, averaging MOP8,000 – 9,000 a square foot, and  that the presale did “pretty well”.

The firm denied it had rushed to clear its inventory prior to the curbs, adding it had planned to launch the presale last November, which was postponed due to the lengthy procedures of obtaining a presale permit. Attracting buyers, particularly local youngsters, the developer has set up a scheme permitting Macau residents aged 45 or below to pay only 20 per cent of the value of flats, or about MOP1.3 million on average, prior to the completion of the project by 2020.

Indeed, the developers of other presale projects have also launched similar measures to entice buyers. Dong Fu Ye offers discounts for homebuyers for full payment or allows buyers 28 months to settle the payment as Waterfront Duet will only be completed next year. Concórdia also allows buyers to pay 20 per cent of the purchase price until Grand Oasis is completed in more than two years’ time.

“The presales of new projects are doing quite well, as the pricing is not very aggressive and averages around MOP8,000-9,000 per square foot, only slightly more expensive than second-hand homes,” said Jane Liu Zee Ka, Managing Director of Ricacorp (Macau) Properties Ltd. “The discounts and longer period for settlement have also drawn the interest of buyers.”

“The result of the presales has so far matched market expectations, given the short promotional time period for the new projects and a wide range of choices available for buyers,” said Ms. Liu. “The daunting property curbs also play a role: while some buyers rush to buy homes, worried about higher costs for purchase later, some take their time, expecting prices to drop.”

Following a busy January, the long-anticipated cooling property package is expected to quell the market, at least in terms of sales volume, similar to previous curbs that shrank the number of home transactions by at least a third for a few months before rebounding.

“The impact on the number of home transactions depends upon how far the government goes in cooling the market,” said Jeff Wong, Head of Residential at Jones Lang LaSalle (Macau) Ltd. “But the impact on home prices will be limited, which will probably rise by 5 per cent this year due to stable local economic growth.”

“In fact, the key issue for Macau is the shortage of housing supply amid the strong demand from the growing population,” Mr. Wong stressed. “To address the problem of housing shortage perhaps the government can consider setting up regular land sales programmes, promoting urban renewal and refining the procedures and timeline requirements of construction work.”

Over half of buyers own one flat or more

How many homebuyers here are end-users and how many are investors? It is a question that often exercises the minds of industry insiders, academics and the general public. But the latest official data sheds some light on the matter – more than half of homebuyers last year already owned at least one home at the time of purchase.

Financial Services Bureau figures show local residents accounted for 96.62 per cent of home transactions last year, or 10,099 flats, while non-residents made up 1.86 per cent, with companies and organisations accounting for 1.52 per cent.

Of all transactions undertaken last year buyers in 4,668 cases – or 44.66 per cent of the total – did not own a home at the time of purchase, 23.99 per cent had one flat at the time, and 31.35 per cent already owned more than one residential unit.

Figures from the Financial Service Bureau show the number of home transactions in existing and new residential complexes in Taipa developed by the transport-to-hotel conglomerate amounted to 867 units, or nearly 8.3 per cent of the total last year. Nova Grand – a high-end residential development of 1,775 flats to be completed by the end of this year – moved 599 flats in presale last year. Other completed residential developments of Shun Tak in the same area – namely, Nova Park, Nova City and Nova Taipa Gardens – posted 268 home transactions last year.

The next red-hot project was La Marina, a high-end development comprising more than 2,700 flats in the Areia Preta district, which sold 392 units last year, when project developer Polytex Corporation Ltd. rushed to complete works prior to the deadline of the land concession of the plot last July. The developer’s other complex of 5,000-plus homes in the area – Pearl Horizon – was scrapped because the government had reclaimed the land plot at the end of 2015 because of the expiry of a 25-year land concession due to the non-completed development of the site.

Trailing behind Nova Grand and La Marina last year was One Oasis – a luxury residential development in Cotai by developer Empresa de Fomento Industrial e Comercial Concórdia, SA – where 190 homes exchanged hands. A total of 113 units were pre-sold in 2017 in the developer’s companion project Sky Oasis, part of its 4,000-plus luxury homes in the Cotai area. The Sky Oasis residences will only be completed this year, the developer has previously stated.

The residential project with the highest priced transactions on average last year was the presale of a luxury development on Small Taipa Hill linked to local junkets.

According to the Financial Services Bureau, the presale of Yoho Twins – two towers of 290-plus flats expected to be completed by 2019 – moved 103 units last year at an average price of MOP178,305 (US$22,288.1) per square metre, the highest price attained by all residences here. With apartment services provided by the Macau Roosevelt Hotel, the prospectus says the project is being developed by Yogo Group; Tak Chun Real Estate, a company linked to the Tak Chun Group, one of the largest junket operators here; and Parry Group, founded by Lai Pak Leng, son of prominent local junket figure and alleged triad boss Lai Tong Sang.

Ranked behind Yoho Twins last year in terms of price was another luxury housing development on Small Taipa Hill – The Peak – which boasts 260 flats. Developed by Sociedade Hotelpor Hotelaria, Importação e Exportação, Lda and completed in 2015, the project saw 54 units transacted last year at an average price of MOP160,808 per square metre.

Sky Oasis, developed by Empresa de Fomento Industrial e Comercial Concórdia, to be finished in Cotai this year, recorded the presale of 113 flats at an average price of MOP158,786 per square metre in 2017.