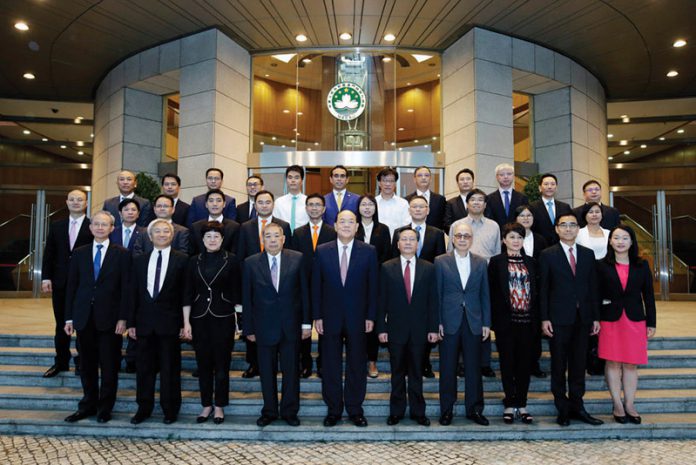 In a recent Policy Address session, Secretary for Security Wong Sio Chak was deeply scrutinised and criticised by legislators over the budget and progress of the severely delayed new prison in Coloane. Pledging the Administration would speed up the process, the official turned to legislator Mak Soi Kun for help.

“I hope legislator Mak [Soi Kun] would work harder,” Mr. Wong smiled to the legislator whose firm was awarded a MOP1.056 billion (US$132 million) contract for the construction of Phase 2 of the new prison.

This rare public exchange between officials and legislators has undoubtedly deepened the public perception that some legislators might have vested interests in the Administration and its policies and measures. The latest round of declaration of assets and interests filed by the city’s 33 Legislative Assembly members reveal that some of them have been granted large sums of money and land resources by the authorities via their companies or associations for the sake of conducting public works and services, organising and participating in community activities, as well as facilitating the city’s development.

According to the latest asset declaration document filed by Mr. Mak in January, he has interests in five companies, including a 70 per cent stake in Soi Kun Engineering Co. Ltd., whch has been awarded some MOP1.058 billion in public contracts over the past five years. In addition to the whopping MOP1.056 billion prison project approved in 2015, Soi Kun Engineering was given MOP1.88 million for a road rehabilitation project in Coloane in 2014 plus a MOP745,000 contract in 2013 for building sample units of public housing, according to calculations based upon the information available in the Official Gazette and official websites of over 80 public bodies.

Likewise, the company formed a joint venture with China Civil Engineering Construction Company (Macau) Ltd. and another firm to carry out a MOP463.99 million contract for building public housing in Toi San in 2011. Given the change of building plan and the impact of the project upon nearby buildings, however, the government voided the contract with the joint venture for an undisclosed amount of compensation. The project restarted last year with the work granted to another venture minus Soi Kun Engineering.

While Mr. Mak’s companies were granted the highest value of works of all legislators, the companies and organisations led by urban planner and lawmaker Jose Chui Sai Peng – cousin of Chief Executive Fernando Chui Sai On – were granted the most projects in the 2013-17 period.

Declaration files show that the urban planner has a 95 per cent stake in CAA City Planning & Engineering Consultants Ltd., which has been awarded at least 10 projects valued in all at MOP29.72 million over the past five years. Last year alone the enterprise was granted seven projects amounting to at least MOP22.97 million; namely, MOP11.59 million for drafting a building plan of Housing Bureau headquarters, a MOP3.9 million building plan for the auxiliary facilities of the new prison, and MOP3.4 million for renovating the Gate of Understanding monument. The total value does not include the drafting of a design plan for Patane market as the Official Gazette has yet to publicise the financial information for that.

Not only have Mr. Chui’s firms been granted public works contracts, so have the associations he heads. The Association for the Promotion of Science and Technology of Macau, which the urban planner has served as president of since 2013, was given MOP5.9 million in 2016 by the Education and Youth Bureau to compile General Studies teaching materials for primary school students.

The Association, formed in 1997 and comprising academics and professionals, was also subsidised to the tune of MOP34.29 million by different public bodies – including the Macau Foundation and the Education Bureau – to organise events to promote science and technology in schools during the 2013-17 period.

Companies of the Chief Executive’s other family member in the Legislative Assembly were not granted any public contracts during the past five years but the associations led by Chui Sai Cheong – elder brother of Fernando Chui – were heavily subsidised by the authorities. Of the 173 associations and organisations the elder Chui is affiliated with, he led 15 groups that were granted MOP101.25 million in subsidies during the 2013-17 period.

The Macau Management Association, which the elder Chui serves on as chairman, was given MOP38.63 million by the Macau Foundation, the Tourism Fund, the Monetary Authority and other public bodies to organise events and courses, as well as participating in the Global Management Challenge.

Macau Region China Council for the Promotion of Peaceful National Reunification, and the Macau Basic Law Promotion Association, which he has served on as chairman for more than a decade, were granted subsidies of MOP9.1 million and MOP26.18 million over the past five years for holding galas and activities to promote knowledge of ‘One Country, Two Systems’ and the Basic Law, the city’s mini-constitution.

Mr. Chui has also been chairman of the Macau Tennis Association since 1998, which was given MOP11.30 million in the 2013-17 period for organising tennis competitions, hiring coaches and renting venues. His other group – Union of Associations of Professional Accountants of Macau – was given MOP5.34 million to participate in local and overseas accounting events.

Nonetheless, the associations affiliated with the two relatives of the Chief Executive were not the parties to benefit most from government subsidies over the past five years. The 16 associations headed by legislator and Executive Council member Chan Chak Mo were subsidised MOP133.2 million in the 2013-17 period by public bodies.

The United Association of Food and Beverage Merchants of Macau alone was approved MOP58.92 million by the Macau Foundation for organising the annual Macau Food Festival and a subsidy scheme for micro, small and medium-sized businesses in the food and beverage sector. The scheme seeks to enhance the competitiveness of small businesses in the local food and beverage sector, thus enriching the local food culture and the city’s tourism offerings.

The Cycling General Association of Macau-China and the Macau-China Bowling Association, for which Mr. Chan serves as chairman, were granted MOP24.89 million and MOP21.57 million, respectively, by the Sports Fund for the training of athletes, hiring of coaches and competing at home and abroad.

Besides affiliating with 27 associations and organisations, the businessman has interests in 25 companies, including seven British Virgin Islands-incorporated firms and a 43.31 per cent interest in Hong Kong-listed food and beverage group Future Bright Holdings Ltd. While his companies have not been given any government contracts, Future Bright Holdings was granted part of a 13,219 square metre land plot in the Zhuhai-Macau Cross-Border Industrial Zone in 2011 by a government-controlled firm for industrial usage, Official Gazette records show.

The company of fellow veteran legislator Vitor Cheung Lup Kwan has recently been granted a revised land concession in Cotai for the development of a marina tourism project. According to his asset declaration, the 80-year old entrepreneur has stakes in his name in seven firms, including a 75 per cent interest in Marina International Club Entertainment Investment (Macau) Company Ltd.

The firm was granted a 107,573 square metre plot in Taipa in 1996 but no development had been heard of since. The land concession was only revised earlier this year, whereby Marina International Club Entertainment relinquished 42,980 square metres to the government for other usage, while it can press ahead with the development of shops, housing, office, hotel, and serviced apartments on the remaining land area. The amended concession also allows the company to utilise 54,121 square metres of water separating Hengqin and Cotai to develop and operate a recreational marina.

Apart from the business side, Mr. Cheung is affiliated with 120 associations and organisations and has led 12 groups, mainly sports associations subsidised in the amount of MOP79.36 million by the authorities over the past five years. For instance, the Macau Football Association, which he has headed since 2004, was approved MOP30.91 million in the 2013-17 period, while the Macau Squash Association was given MOP19.11 million.

Following the departure of political heavyweight Chan Meng Kam from the Legislative Assembly, casino executive Angela Leong On Kei is now the legislator with the most properties and companies in the new 2017-2021 term.

Her asset declaration document filed in January shows she owns 275 properties, increasing by more than fivefold from the 52 properties she declared in 2013. The latest addition to her extensive property portfolio includes 11 commercial buildings, 10 villas, 51 flats, 56 office units, 24 shops, 60 car parks, seven plots of land, three industrial units and one golf course. She did not list the value or location of her new properties, which is not required by the law of assets declaration by officials and individuals holding public titles.

But Ms. Leong, fourth consort of local casino mogul Stanley Ho Hung Sun, has reportedly bought properties locally and overseas over the past few years. Financial news agency Bloomberg reported that the legislator had spent £250 million (US$338 million) on a historic building in the toney Aldwych district of London last year.

The casino executive also has direct stakes in 230 companies – including 31 local firms, 87 Hong Kong firms, six Mainland Chinese companies, 100 enterprises incorporated in the British Virgin Islands, and six Australian companies – more than any of the 32 other lawmakers. This figure represents a more than six-fold hike from the 34 companies she claimed to have a financial interest in, in 2013.

In addition to gaming, hotel and property businesses, the declaration file reveals Ms. Leong has expanded her business empire into radio and auctions in recent years. She now has a 49 per cent stake in Poly Auction Macau Ltd., a joint venture with a subsidiary of China’s largest state-owned auction house Poly Culture Group Corp Ltd., for facilitating the local auction business.

The businesswoman now controls a 43.58 per cent interest in Radio Vilaverde Limited, which was granted a local radio licence to run a radio station in 2015. Last year, she also opened a downtown dessert shop with a 49 per cent stake in the franchise of a popular dessert brand in Hong Kong.

Amid the business-dominated legislature, four lawmakers in the new 2017-21 term have neither properties nor financial interests in any companies, according to their latest asset declarations.

Legislator Au Kam San, elected since 2001, proclaimed he has no properties or companies under his name, as does his peer in the pan-democratic camp, Sulu Sou Ka Hou, the youngest legislator in the city’s history whose mandate has been suspended since December pending a trial for aggravated disobedience involving a protest in 2016.

Lawmaker Antonio Ng Kuok Cheong of the pan-democratic camp declared he has three residential properties, one for self-usage and two for leasing, documents show.

Besides Messrs. Au and Sou, the duo from the Macau Federation of Trade Unions – Ella Lei Cheng I and Lei Chan U – declared respectively that they have no assets under their names. Their fellow member in the city’s largest labour group, Lam Lon Wai, claimed to have one flat, while fellow member Leong Sun Iok declared two homes and one car park.

Compared with the declaration he made in 2013, Mr. Vong has acquired two more local flats and three more local car parks over the past few years. He has also declared direct interests in nine local firms, mainly legal and translation service companies, the records show.