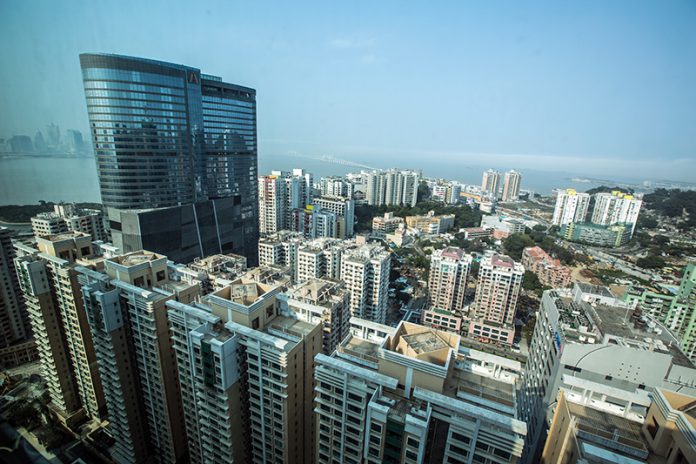 The local property market is expected to continue a stable upward trajectory this year, supported by the continuous growth of the local economy despite rising interest rates and more cooling measures by the government to rein in the sector. Pundits urge authorities to put comprehensive property curbs in place to subdue further spikes in the market.

In December, the United States Federal Reserve raised the interest rate by a quarter of a percentage point, the third rise in 2017. Three more hikes are expected this year and at least two more in 2019 and 2020, respectively.

With the city’s currency, the pataca, indirectly pegged to the U.S. dollar via the Hong Kong dollar, monetary authorities in the two Special Administrative Regions have followed the latest moves of the U.S. Fed. The Monetary Authority of Macau raised its base rate of the discount window by the same increment to 1.75 per cent last month, the fifth hike since December 2015.

Lenders in both Macau and Hong Kong have so far maintained unchanged interest rates despite a series of hikes in the world’s largest economy. But this might soon change.

‘The pressure on local banks to raise interest rates at the retail level has been accumulating owing to rising fund costs in the money market,’ said the local de facto central bank in a statement. ‘[The] possibility of uplifting loan and deposit interest rates by Macau banks cannot be ruled out in the foreseeable future,’ it said, adding residents should be vigilant to the volatility of the real estate market and review their financial capabilities before any home purchase.

Macau Business asked the Macau Association of Banks to comment on this story but had not received any reply by press time. Industrial and Commercial Bank of China (Macau) Ltd., one of the largest lenders here, believes banks in both Hong Kong and Macau will only raise the prime rate in the first half of 2018 at the earliest, given there is still ample liquidity in the banking systems at the moment.

“There has been talk of interest rate hikes for a long time and the market is ready for it,” said Roy Ho Siu Hang, Director of Centaline (Macau) Property Agency Ltd. “The Macau market is also less susceptible to external factors compared to other markets . . . so the impact of the interest rate hike is limited.”

Second-hand home prices might be subject to downward pressure for a short while following the hike of the prime rate in Macau, he added, “but gaming revenue, retail sales and other economic indicators are more influential in the local property market.” He believes the property market will continue its stable growth this year, similar to 2017.

While homes are sought by end-users and investors, development sites in the city are deprived of land resources. A private 5,597 square metre development site in the northern district of Taipa was sold to a Mainland Chinese firm, Jiayuan International Group Ltd, at a record price of HK$3.51 billion in December, according to local property service provider Jones Lang LaSalle (Macau) Ltd.

Not an investment vehicle

Amid signs of the rising local property market, the government had initially seemed reluctant to roll out any additional cooling measures, having tightened mortgage rules, except for local first-time buyers last May. In his recent Policy Address in November, Chief Executive Fernando Chui Sai On only hinted that the government would closely monitor the real estate market, stressing many factors had to be considered before the implementation of any new curbs because Macau was a “free-market economy”.

However, in the wake of a recent trip to Beijing in December to give his annual working report to President Xi Jinping, Premier Li Keqiang and other officials of the central government, Mr. Chui has changed his tone. The government would launch “in a short time” mortgage and tax related measures to facilitate the healthy development of the property market “after receiving a lot of opinions from society and legislators,” he said.

“The government has been negligent of public opinion, allowing home prices to skyrocket beyond the reach of residents,” laments legislator Ho Ion Sang, adding that the annual survey of his Association – the General Union of Neighbourhood Associations of Macau – shows that housing is one of the issues youngsters are most disaffected with. “As a responsible government, it should not regard houses as investment vehicles [for residents],” he added.

The lawmaker believes authorities should have a basket of measures at the ready this time; namely, duty on vacant flats, no mortgage lending available for buyers owning more than two homes, and a progressive tax scheme in which buyers of multiple flats have to pay heavier duties. “If the government simply tightens mortgage lending rules [as happened] last May, the impact will be limited,” the legislator concluded.

The latest official figures show that there were 12,497 empty flats in Macau as of December 2016, accounting for 5.7 per cent of total completed flats in the city. But officials noted in the recent Policy Address that it might be challenging to enforce vacancy tax due to the difficulty of defining vacant flats: some owners may continue paying the water and electricity bills of their vacant homes to pretend the units are occupied.

“There have been various cooling measures rolled out in nearby Hong Kong in the past two years concerning the housing market but there are only limited measures here,” she said. “The long waiting time for public housing and soaring private home prices has led to great discord among the local grassroots who are waiting for the authorities to launch effective housing curbs.”

A recent report on public housing demand commissioned by the authorities reveals that there is a lack of short to mid-term supply here, at least until 2021, estimating the shortage of public homes will total nearly 22,000 flats in the next few years. “Boosting the home supply – both private and public – is the most effective means for the healthy development of the market,” says Chong Siu Kin, president of the Real Estate Association of Macau.

He believes the government has decided to launch new cooling measures to “prevent the formation of a bubble” in the property market. “But the authorities should be careful in rolling out any curbs: if these lead to a big decline in home prices it will not only affect homeowners but have a paramount impact upon the economy,” he warned.

One of his property companies will launch the presales of a new project – Waterfront Duet – on Rua do Comandante João Belo in Fai Chi Kei this month. The project – comprising some 1,000 units, including 600-plus studio flats – will only be completed by end-2019, offering yacht club services.

Mr. Chong said any cooling measures would impact the number of transactions rather than affect home prices. “Like the curbs the authorities have rolled out in the past it will take about half a year for the market to grow accustomed,” he forecasts. “The home price might rise another 5 per cent in the second half of [this] year again . . . thanks to the good economic prospects.”

2010 – The transaction fee for residential property is raised from 0.5 per cent of property value to 3 per cent

June 2011 – A total of 10 measures are introduced, including a special stamp duty of up to 20 per cent of property value levied on the resale of a flat within two years of purchase; and tightening of mortgage loans for flats valued at MOP3.3 million (US$412,500) or above to at most 70 per cent

October 2012 — A new round of eight measures is introduced; namely, a special stamp duty extending to commercial properties, car parks and offices; a buyer’s stamp duty of 10 per cent levied on non-residents and companies buying a home; and tightened mortgage loans for residents and non-residents buying completed flats or presales of unfinished flats

May 2017 — The loan-to-value ceiling for property mortgage loans is tightened, except for local, first-time buyers.