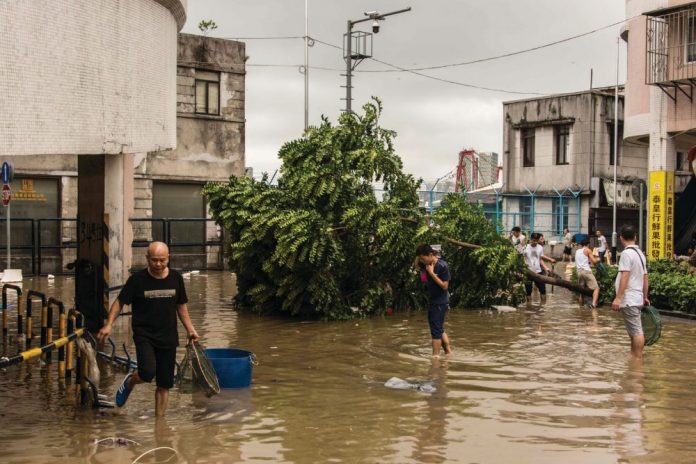 In the aftermath of Typhoon Hato, the strongest typhoon to hit the gambling enclave in more than six decades, the government has come up with a number of measures to improve the current disaster relief mechanism. One of them, unsurprisingly, includes the setting up of a new bureau-level entity for civil protection and emergency response co-ordination.

This knee-jerk reaction from the Administration, with the support of the central government, seeks to resolve the problem of government departments acting on their own but might prove counter-constructive to the Administration’s plan to streamline its bureaucracy – and serve as a scapegoat for major officials in the future, say political observers.

When Typhoon Hato ravaged the territory in August the death toll hit 10 with damage amounting to MOP11.4 billion (US$1.43 billion) amid flooding and other forms of destruction across various districts. In addition to inefficient weather forecasting and poor infrastructure, many pinpoint the disorganisation of official disaster relief resources as another cause of great damage to the gambling enclave.

The current civil protection mechanism, led by the General-Commissioner of the Unitary Police Service under the Secretary for Security and Chief Executive, is only initiated when Typhoon Signal Number 8 or above is hoisted. The police commissioner oversees the Civil Protection Operations Centre – located in the Immigration Department in Pac On, Taipa – which mobilises the resources and manpower of nine police forces, 11 public bodies and seven private companies and utilities.

Besides the operations centre, the government set up a council for tackling unforeseen incidents, led by the Chief Executive, in 2012 with the objective of co-ordinating public bodies in preparation for contingency measures in anticipation of natural disasters, public health and public security events.

Acting in a vacuum

But all these failed to come up to par when Typhoon Hato struck the city. Eilo Yu Wing Yat, an Associate Professor of Political Science at the University of Macau, thinks it is due to the local governance culture of public bodies failing to collaborate smoothly to enforce emergency response measures.

“Since the times of [former Chief Executive] Edmund Ho Hau Wah . . . the city’s top job delegates most of the powers to the [five] Secretaries for governance, who in turn delegate their powers to their respective bureaus,” the academic said. “This leads to a situation that each entity is used to its own operation, hesitant to collaborate with other parties.”

“This mechanism can run smoothly in normal conditions but it becomes inefficient when facing emergencies that require cross-departmental co-operation,” he added.

The government’s solution to this problem in the post-Hato era is the establishment of a bureau-level entity. The set-up of the Civil Protection and Emergency Co-ordination Bureau was among the 11 short-to-long-term initiatives unveiled by the authorities in September to strengthen Macau’s co-ordination of work amid a crisis.

In contrast to the current civil protection mechanism the Civil Protection Operations Centre will only be fully activated in the event of Typhoon Signal Number 8 or above being hoisted and other emergencies; the proposed bureau will operate all the time, conducting promotional campaigns to enhance public awareness of civil protection and disaster relief measures. The Centre will also be incorporated into the new bureau.

However, since the announcement, the new initiative has been scrutinised for its necessity, given the new headquarters of the Civil Protection Operations Centre in Pac On, seven times the size of the old headquarters, was only inaugurated in May. The Unitary Police Service said in a press statement at the time that the new site of the Centre ‘has ample room for more direct co-ordination among the representatives of 27 parties under the civil protection mechanism, allowing [the government] to have a clear grasp of all sorts of information promptly.’

Legislator-cum-academic Agnes Lam Iok Fong is sceptical that the new bureau might oppose the government’s goal to streamline its structure and keep its headcount under control. There were 31,279 civil servants as of September 2017, rising 13.8 per cent from nearly 27,500 in 2013, figures from the Public Administration and Civil Service Bureau reveal.

“The proposed bureau is said to be in charge of the promotional and education works to enhance the public awareness of civil protection measures, but some of these works are now done by the Fire Services, the Education and Youth Affairs Bureau, and the Civil and Municipal Affairs Bureau,” said Ms. Lam. “The incident of Typhoon Hato reflects that there is a problem in cross-departmental co-ordination within the government; the key is how this new bureau can mobilise other government departments.”

She added that the government has not done enough stress tests in the past concerning the civil protection mechanism, which collapsed during the mega typhoon in August.

In response to criticism of the new initiative, Secretary for Security Wong Sio Chak said in a recent Policy Address session with legislators that the proposed bureau heads the agenda for 2018, and that the proposal was suggested by experts from the National Commission for Disaster Reduction of the central government who visited the city in the aftermath of Typhoon Hato to inspect disaster relief works.

Acknowledging the lack of government co-ordination in civil protection in the past, Mr. Wong said the new bureau could help make changes. Two sets of new legislation with regard to civil protection will be subject to the deliberations of the Legislative Assembly in 2018, which will empower the new bureau to mobilise resources and clearly list the obligations of each entity under the civil protection mechanism – plus penalties for failing to comply with the rules.

But the government has so far failed to provide more details; namely, the department’s headcount, the co-ordination between the existing entities in the areas such as the Unitary Police Service, and the council for tackling unforeseen incidents.

Legislator Au Kam San thinks the proposed bureau might only serve as a scapegoat in the event of future disasters. Although officials of the Meteorological and Geophysical Bureau took the fall in the aftermath of Typhoon Hato this still proved unsatisfactory for the public at large, who wanted to hold the Chief Executive accountable for the chaos evident during the typhoon, he said.

“If [the current system] cannot resolve the problems of government departments acting on their own, how can [the government] expect a new bureau director to change this?” he queried. “The set-up of the new bureau will more likely be used to take the fall for the Secretary [for security] and the Chief Executive in the event of any future problems in civil protection.”

The authorities have set up a number of high-level councils in response to major incidents in the territory – from a collapsing building to the devastation caused by the strongest typhoon in half a century.

In the wake of the collapse of a supporting pillar of a private residential building, Sin Fong Garden, in Patane in 2012, over 140 households had to be evacuated and accommodated elsewhere in the city, supported by various government departments. Considering the possibility of future major incidents, the government set up the Council for the Treatment of Unforeseen Incidents at the time.

The council – led by the Chief Executive and comprising directors of the Government Information Bureau, Legal Affairs Bureau, Health Bureau, Public Security Police Force and others – seeks to co-ordinate and mobilise public bodies in the event of natural disasters, accidents, health and security incidents that harm the public interest. The council has powers to initiate the current civil protection mechanism and other contingency measures in the areas of tourism, health and food safety, as well as seeking help from private entities.

However, the council has been unheard of regarding any progress since its inception, and did not function when Typhoon Hato trampled the city in August.

Immediately after Typhoon Hato hit the government established another council – the Commission for Reviewing and Monitoring the Improvements of the Response Mechanism to Major Disasters – which shares similar functions to the ‘unforeseen incidents’ committee.

The new council, headed by Mr. Chui as well, comprises the five Secretaries, Commissioner-general of the Unitary Police Service, and the Director-general of Macau Customs. The council is expected to come up with a master contingency plan for the Administration in the event of crises as well as making proposals to improve civil protection, security and rescue works.

One of the 11 short-to-long term measures proposed by the new council is the establishment of the Civil Protection and Emergency Co-ordination Bureau, reporting directly to the Chief Executive and Secretary for Security, which will oversee, implement and also regularly review the city’s civil protection works.