Myanmar police issued an arrest warrant Tuesday evening for an ultra-nationalist monk known as the “Buddhist Bin Laden” for his vitriol against Islam and particularly the Rohingya Muslim community. Wirathu has long been the face of the country’s Buddhist nationalist movement, notorious for espousing hate against the Rohingya minority.

WHO tells UN: now back words with action on vaccines

February 27, 2021
Saudi Arabia on Friday said it "completely rejects" a declassified US report that found that... 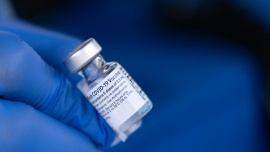 February 27, 2021
The first doses of the BioNTech vaccine supplied by Fosun Pharma have arrived in Macau...

February 27, 2021
Iran on Friday "strongly condemned" a deadly US air strike in Syria, the foreign ministry...

February 27, 2021
The United States on Friday imposed sanctions on an elite Saudi unit as well as...
Load more