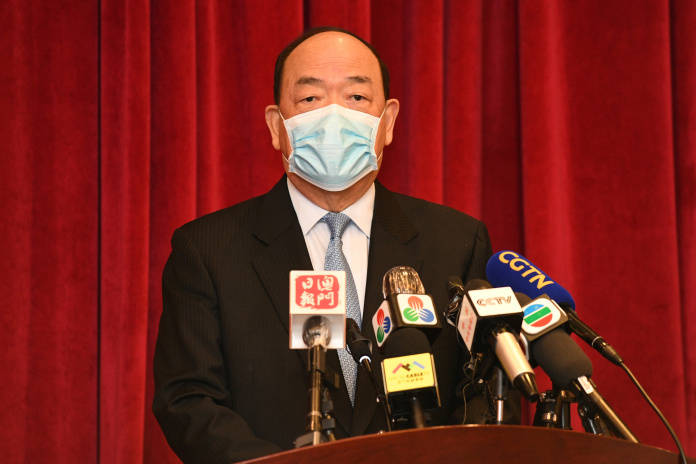 Chief Executive Ho Iat Seng said the Government is still expecting to achieve MOP130 billion in gross gaming revenue in 2022, as forecast in the budget for next year, however as the outlook for next year remains unclear, should there be any local cases, the year’s gross gaming revenue might not meet the MSAR Government’s expectation, he said as quoted in a press release.

The Chief Executive (CE) was talking to the media at the Macau International Airport after returning to the SAR following a four-day duty visit to Beijing.

The Government had also estimated that gaming revenue for 2021 would reach MOP130 billion, however official figures related to the first eleven months of the year show that gross revenue did go beyond MOP 78.9 billion.

The gross revenue for 2021 would have been close to that figure, had the city not experienced COVID-19 outbreaks respectively in August, September and October, the Chief Executive said.

Mr Ho also noted that the junket industry has been seeing its business shrinking over the past five years.

At this stage, the Government has yet to assess the impact of he suspension of gaming promoters’ operations, he said, while adding that the Labour Affairs Bureau will continue to assist staff affected by the closure of junket-operated VIP rooms in casinos, by helping them find a job or providing vocational training.

There has been talk in the business community about the prospect of a cophrehensive quarantine-free travel arrangement between Macau and Hong Kong.

Asked about when that could start, Mr Ho noted that such arrangement would require approval from the Central Government. Once the details of a Mainland-Hong Kong scheme are finalised, Macau would follow suit.Any news on this matter will be announced in a timely manner, the Chief executive concluded.

During the meetings with the central leadership, state leaders acknowledged the SAR’s anti-pandemic efforts and voiced support to the city’s adequate economic diversification, Mr Ho underlined.

In his report to President Xi Jinping and Premier Li Keqiang, the Macau Chief Executive noted that the SAR economy had been battered due to the decrease in tourist numbers to Macao amid the COVID-19 alert.

“The state leaders ade clear the problem of overreliance on a single industry, saying the Central Government would as always give its strongest support for Macao to diversify its economy in an adequate manner”, according to a press release issued by the Government Information Bureau.

The Central Government gave the green light to the SAR’s policy guidelines for 2022.