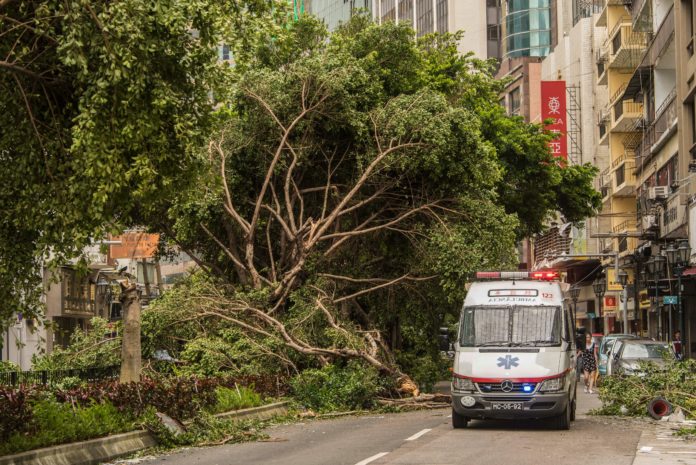 Macau – The trees chosen to be replanted in the more robust and wind-resistant urban areas will take three to five years to grow, but should be able to withstand the next tropical storm season, which may extend from May to October.

This will be the first phase of replanting trees in the territory. “By the end of the year, we will recover 70 to 80 per cent of the destroyed trees in urban areas” of Macau, Taipa and Coloane, said the head of the Urban Green Spaces Division of the Civic and Municipal Affairs Bureau (IACM).

The budget for the initial phase of the operation is more than MOP8million and has already been used to acquire near 1,500 trees of 15 different species, adapted to the conditions of the territory. The new trees come mostly from Guangdong Province, in Southern China.

Soon after the passage of Hato, the IACM treated more than 17,000 trees in the urban areas of the peninsula and the islands, removed 3,500 and straightened more than a thousand.

Replanting in urban areas will meet a number of criteria, such as the surrounding environment, street planning, vehicle and pedestrian safety or the distribution of the sewerage network, said Ung Sio Wai at a meeting with journalists in the northern Macau, one of the hardest hit on the peninsula.

Already in the forest areas of the territory, where more than 500 hectares were affected by the passage of the Hato, the recovery can take ten years

The IACM official said that the full recovery of these areas, particularly in the islands of Taipa and Coloane, will require “complex, clean and replanting work over a number of years.”

To begin and after the cleaning actions, the IACM will plant, during the green week, from March 17 to 25, a thousand trees in these forest areas, prioritizing the recovery of the forest rails and the surrounding areas, within a radius of ten meters.

The recovery of the forest area, where at least 500,000 trees have been affected, will be in 2019, after the replanting phase has been completed in the green spaces of urban areas, he said.

The plan, which could extend over ten years, will be in cooperation with the Forestry Administration of Guangdong Province and has been awarded to several companies.

Ung Sio Wai also said that of the 555 historic trees in the territory, 44 were affected, some of which had to be straightened out, and nine fell and were uprooted.

By the end of last month, Macau registered more than 22,000 trees in urban areas.

Hato, the worst typhoon to pass the territory in more than 50 years, caused ten deaths, more than 240 injured and losses of MOP12.55 billion.