Mozambique’s government has said that the country’s Defence and Security Forces (FDS) have regained control of the town of Macomia, in the northern province of Cabo Delgado, and shot two leaders of terrorist groups that occupied it.

“In this counter-offensive two of the main leaders were shot,” the minister of defence, Jaime Neto, said in a statement to Televisão de Moçambique (TVM) on Sunday.

According to the information transmitted, 78 rebels died, two of the leaders were Tanzanians and one of them is said to have led the first attack of the armed groups carried out in October 2017 against Mocímboa da Praia.

“They probably did not expect this better organisation of our forces,” he said.

The confrontations in Macomia that lasted since Thursday caused the collapse of the power line that supplies the northern area of Cabo Delgado, which passes next to the village and whose replacement the minister of defence promised soon.

No other data on losses or whether there were casualties among civilians or military forces was announced.

Jaime Neto appealed to the population to continue collaborating with the Defence and Security Forces.

In a statement to journalists in Pemba, the provincial capital, Governor Valige Tauabo had announced the restoration of calm with the return of families to their homes after a general evacuation.

Tauabo said that residents who are returning first to Macomia and surrounding villages are ransacking neighbours’ homes, calling for order.

Armed groups classified as terrorists and affiliated to the jihadist Islamic state movement have occupied Macomia, the main village in the centre of the province since Thursday.

It is the best-known meeting point in the middle of the paved road linking the north and south of Cabo Delgado, with a bank, various services, stores, and the headquarters of a district with about 100,000 inhabitants.

The incursion took place after an intensification of violence since March and led to the temporary occupation of other villages such as Mocímboa da Praia, Quissanga and Muidumbe, with reports of dozens of deaths among civilians, insurgents, and the military.

Cabo Delgado, the province where the largest private investment in Africa for natural gas exploration is under attack since October 2017, by insurgents classified since the beginning of the year by Mozambican and international authorities as a terrorist threat.

For a year now, the jihadist Islamic state group has been claiming some of the incursions.

In two and a half years of conflict, it is estimated that at least 550 people have died and about 200,000 have been affected, being forced to take refuge in safer places, losing their homes, gardens, and other property. 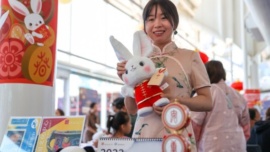 February 5, 2023
As the Chinese Lantern Festival is approaching, a special celebratory event is held in Australia's...