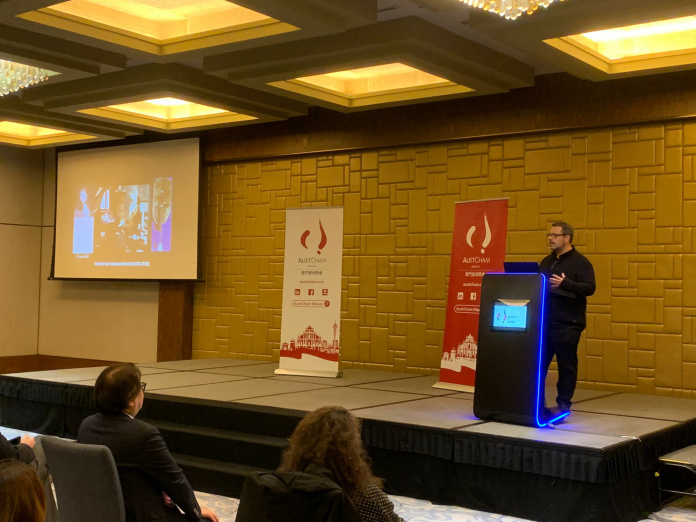 A research team involving André Antunes, a scientist from the Macau University of Science and Technology (MUST), is requesting samples brought back by the Chinese Chang’e-5 lunar mission last year to study how to lower the cost of building a lunar base.

The news was advanced by Antunes, an associate professor at the State Key Laboratory of Lunar and Planetary Sciences (SKLplanets) of MUST, at the latest session of Power Hour talk series hosted by the Australian Chamber of Commerce in Macau today (Wednesday).

“I’m happy to report — and actually you have seen it on the news — Macau has just received the first sample from Chang’e. We’re going to do some experiments with it,” Prof. Antunes told the audience of the “Power Hour 17: Are We Alone in the Universe?” session held at the Astor Ballroom of the St. Regis Macao.

The Chang’e-5 probe, the fifth lunar exploration mission of the Chinese Lunar Exploration Program under the China National Space Administration, was launched last year and returned to the Earth last December with a total of 1,731 grams of lunar samples, mainly comprising rocks and soil from the moon’s surface, Chinese state-run news agency Xinhua reported at the time.

As part of the commemorations of the 20th anniversary of the establishment of the Macau SAR, the central government has promised some samples would be given to the institutions in the city for research and analysis.

“Some of the researchers from the State Key Lab [SKLplanets] have requested it and [their requests] have been approved,” Prof. Antunes said on Wednesday. “Me [sic] and other people in my group are requesting … to get access to some lunar dust.”

The second batch of the lunar samples from the Chang’e-5 probe, weighing 17.9 grams, was distributed to 17 research institutions this October, including MUST for the first time, following the distribution of the first batch of samples to mainland Chinese institutions in July, Xinhua reported.

MUST also noted in a statement in October that the local university was “the only non-mainland institution” qualified for the access to lunar samples. Two research teams of the SKLplanets led by Associate Professor Zhu Menghua and Assistant Professor Li Shaolin respectively would carry out studies on the samples to understand more about the evolution of the moon and the solar system, the university said.

According to Prof Antunes, mankinds has not built a moon base yet due to the high costs, but some of the resources available on the moon could actually transform into construction materials.

Thus, the scholar hopes to use the lunar samples from the Chang’e-5 mission to “test this approach for cutting down the cost of building a lunar base.”