The National Mall in downtown Washington will be closed because of security concerns until after Wednesday’s inauguration of US President-elect Joe Biden, the National Park Service said Friday.

The Mall, which is normally packed with people every four years for presidential inaugurations, is being declared off-limits at the request of the Secret Service, which ensures the security of the president, the Park Service said.

The grassy expanse, where Martin Luther King Jr delivered his famous “I Have a Dream” speech, will be closed from 11:00 am (1600 GMT) on Friday through at least Thursday, the day after Biden is to be sworn in as the 46h president of the United States, it said.

“The closure has been ordered to ensure safety and security within the area of the  National Special Security Event designated by the Department of Homeland Security for the 59th presidential inauguration,” the Park Service said in a statement.

The inauguration is taking place amid unprecedented security following the January 6 storming of the Capitol by supporters of President Donald Trump while Congress was certifying Biden’s November 3 election victory.

Security officials have warned that armed extremist Trump supporters, possibly carrying explosives, pose a threat to Washington as well as state capitals over the coming week.

Thousands of National Guard troops have been deployed in Washington and streets have been blocked off downtown with concrete barriers.

The Park Service said demonstrations would be permitted in two areas of the capital — the US Navy Memorial and John Marshall Park — “for those holding permits.”

“Demonstrations will be limited in number and participants will be screened prior to entry and escorted to their permitted location, in addition to other safety related requirements,” it said. “Only those holding permits will be allowed within the closed area.”

While Biden and Vice President-elect Kamala Harris are to be sworn in at a public ceremony outside of the Capitol, most of the event is to be virtual and Washington Mayor Muriel Bowser has appealed for people to stay home.

March 2, 2021
Britain on Monday appealed for a person infected with a powerful Covid-19 strain from Brazil... 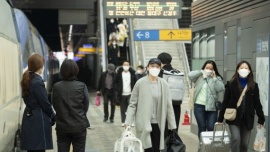