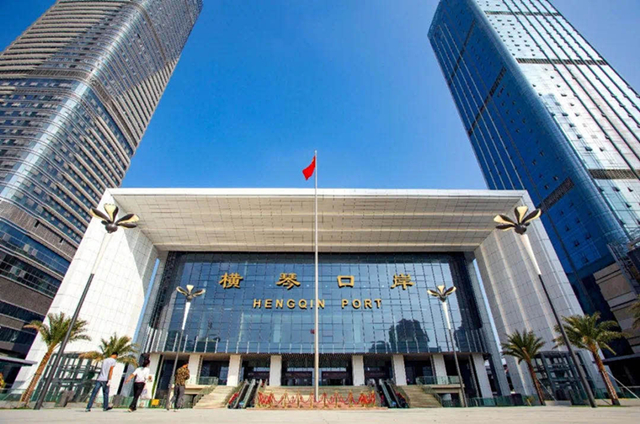 With a capacity for 220,000 crossings per day and 80 million per year, the new Hengqin border checkpoint has opened to the public from 3:00pm of today (Tuesday) as cross-border restrictions between Macau and Guangdong are gradually lifted.

“This opens a new chapter in the development of cooperation with Guangdong” through the ‘expansion’ of Macau to Hengqin […] There is no doubt that Hengqin is the best platform for Macau to participate in the construction of the Greater Bay Area […] and to integrate into the country’s global development,” Chief Executive Ho Iat Seng indicated in the opening ceremony held today.

Ho added that the new border will not only “facilitate the exchange of people and goods between the two places”, but it will also attract Macau residents to work, invest and live in Hengqin, and promote integration and development of residents’ livelihood.

The new border is said to use a one-time joint inspection system that will cut customs clearance time to fewer than 60 seconds, with Macau-bound travellers to queue up and have their documents examined only once.

After several restrictions imposed by the Covid-19 pandemic, tourist visas for Zhuhai residents started being issued again since August 12, and are scheduled to resume for Guangdong on August 26 and then for the whole of China on September 23.

During the first phase the new border operations, 35 exit channels and 34 entry channels will be available, as well as four provisional corridors for vehicle exits and entries.

With permanent vehicle corridors still under construction at this stage only the passage of dual-registration vehicles from Guangdong and Macau, with registration in Hengqin and some authorized goods vehicles for transport hazardous and chemical substances, will be allowed in provisional corridors.

The passage of pedestrians, bicycles, animals, non-motorized vehicles, motorcycles and unauthorized vehicles is prohibited in the Lotus Bridge.

To facilitate population movements to the new border, three new bus stops will start to operate, with bus routes 25B and 50 extended to the areas under Macau SAr jurisdiction in new Hengqin Border Checkpoint.

A new 701X bus route operating 24/7 was also added between the Macau section of the new checkpoint, the Lotis Bridge bus stop and the parking lot silo, with a taxi stop installed in the Henqgin border with an additional fee of five patacas to be charged per trip.

The Public Security Police Force (CPSP) has also implemented two measures to facilitate border crossings, including reducing the age allowed for the use of automatic inspection channels from 11 years to 7 years, as well as reducing the age of the elderly allowed to use the priority corridor from 65 years to 60 years.

The new border will also adopt the full mutual recognition and exchange health control inspection model used in the Hong Kong-Zhuhai-Macau Bridge, that is, the jurisdiction where the person is exiting from carries out the necessary health inspections such as body temperature measurement, verification of the Health Code and checking the valid certificate with a negative nucleic acid test, according to the requirements of the region where you will enter.

If a tourist is considered of risk he is delivered to the region where he was planning to enter.

The 66,428 square meters area handed to the Macau government is included in the first phase of the new border project and includes the passenger inspection building, the evacuation platform for entrances and exits and the main bridge of the Lotus Flower Bridge, which was previously under the purview of Zhuhai authorities.

A second phase will cover the permanent cargo and passenger vehicle passages, as well as the passenger inspection room for vehicles crossing the border and the future bridge connecting it to the University of Macau, which should be completed at the end of 2021.

The third stage includes the area reserved for the extension of the Macau Light Rapid Transit to the Hengqin Border Post, with the line to be connected to the Zhuhai rapid transit system in the future.