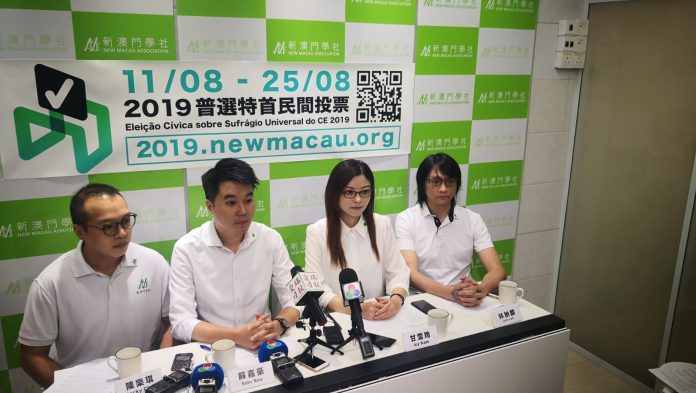 The New Macau Association (NMA) has announced today that it will launch an online referendum for local residents to express if they would like for the Macau Chief Executive to be elected through universal suffrage.

“The vote is intended to create a chance for the public to express their view on political reform […] the lack of representation is the root cause of poor administration and a wide range of community issues that Macau residents face every day. The Macau government lacks legitimacy as the majority of Macau residents are deprived of the right to elect the head of government,” legislator Sulu Sou stated today.

The voting website is already online, however, votes will only be considered valid starting from Sunday.

The political association has for a long time demanded the Macau head of government be elected through the universal vote and again criticized the fact that “only 400 people” will be eligible to “select” the next CE, leaving “300,000 qualified Macau voters” out of the political process.

NMA also indicated that it will erase voter’s data when the referendum is concluded, with the initiative using service providers that include “European level of personal data protection” and with the servers being based in Hong Kong.

The association also noted that it had already submitted a request to the Office for Personal Data Protection (GPDP) for the voting, as requested by data protection legislation.

The legislator also stated that after a long discussion, NMA and his legal team are confident the activity will not be considered illegal by authorities, and avoid the issues that arose during the 2014 CE election.

In 2014 political activist Jason Chao held a similar referendum on electoral reform before the CE election that year, with people able to vote online and in offline locations.

Although Chao was a top NMA member at the time, the political association was not one of the organisers of the referendum, which was carried out by associations Open Macau Society, Macau Youth Dynamics, and Macau Conscience.

Questions include whether there should be universal suffrage for the 2019 CE elections and how confident voters are in the upcoming vote’s sole candidate Fernando Chui Sai On.

However, the initiative leading the Chinese liaison office to issue a statement saying the city could not hold such a referendum, and with the GPDP requesting that poll organizers stop collecting and processing voters’ personal data.

Chao later also faced charges of aggravated disobedience after he refused to hand authorities with the referendum’s online database, with the activist destroying the data instead.

“There is a big difference to the 2014 referendum. This time the voting will not mention any specific candidates and we don’t offer an option to vote if you trust the candidate or not,” the legislator said.

“Our activity is totally legal and we ask the government to not just respect but also study any social activity.”

At the time, out of 8,688 voters, 89.3 per cent said they did not have confidence in Chui, with 95 per cent saying they supported universal suffrage for the 2019 election.

Legislator Sulu Sou said that most important than trying to get more people to vote was to increase the awareness of residents to such matters and allow them to actively share their opinion over political reforms.

This week, Secretary for Administration and Justice Sonia Chan Hoi Fan said at the Legislative Assembly (AL) that authorities had no current plans to advance with any democratic reforms.

The last change to the local political system took place in 2012, when the number of CE Electoral Committee members from 300 to 400 and the number of AL legislators increased to 33, with two directly and indirectly elected legislators added.

Legislator Sulu Sou said that he “understood” that the Secretary can only make that statement at this moment but questioned that the Secretary was confused in saying that the initiative for political reforms should come from the Chinese central government and not the CE.

“The first step of political reform must be the CE, he should submit a report to the [National People’s Congress Permanent Committee]. Then they decide if a political reform should be started or not,” he added.

January 22, 2022
The Office of the Commissioner of the Chinese Foreign Ministry in the Hong Kong Special...
Load more