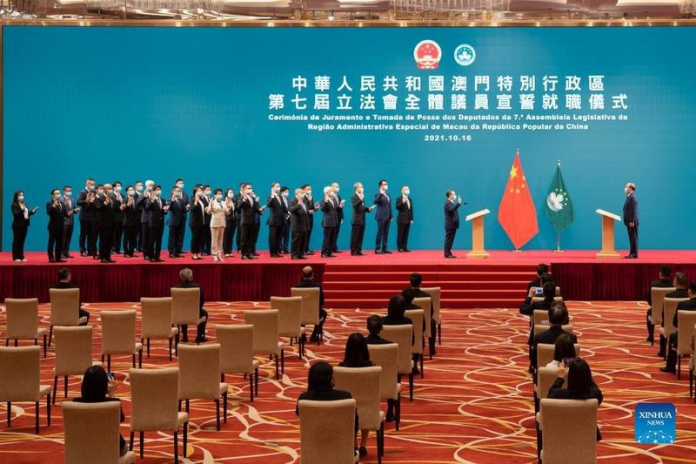 In the first session of the new Legislative Assembly session held today (Tuesday), newcomer legislators chose to urge authorities for more support measures for SMEs, more online promotional campaigns to attract mainland tourists and a solution to the shortage of available domestic workers in the SAR.

The first session served only to elect the members of the AL standing committees, with some written enquires read by legislators before the main order of the day at the plenary.

In her first intervention, banker Lo Choi In – the Vice-President of the Macau Jiangmen Communal Society and elected legislator in the same list as Zheng Anting – proposed that the public financial leasing and guarantee fund should offer risk guarantees credit for commercial banking facilities granted to local businesses, in order to alleviate the pressure of credit risks borne by the banking system and increase their ability to provide financial support to local businesses.

“So as to ensure the stability of the financial system, the Government may resort to the force of support from the financial sector to promote Macau’s economy,” she added.

Concerning how to boost economic recovery, secure employment and safeguard the survival of local companies, the legislator suggested authorities should continue to boost consumption by the population and support the financial sector in its capacity to support SMEs.

After the most recent local outbreak and respective pandemic control measures, the Macau government decided to launch eight more support measures to help SMEs cope with its impact in the local economy, including subsidising SMEs’ bank loan interest payments, and rent or tax exemptions.

Appointed legislator Cheung Kin Chong – a Macau CTS Hotel Management (International) Ltd. and Chairman of the Board of Directors of China Travel and Tourism Agency (Macau) – urged that raising the local vaccination rate to 80 or 90 per cent would be crucial to attract more mainland tourists while urging for more online promotional campaigns in that market.

In recent years tourism authorities have looked to attract more mainland visitors by offering discounts on the purchase of airline tickets, accommodation and consumption coupons via e-commerce platforms.

“We can continue to strengthen cooperation with video sharing apps like TikTok and Kwai and Key Opinion Leaders to create works about Macau presented by people of Macau, from Mainland China or abroad; we can still promote and encourage Macau SMEs to start pilot projects, creating more popular tourist spots on the internet and more innovative tourist products, for example, ‘lucky bag’ and ‘blind box’ [online promotions] to attract more tourists to visit and vacation in Macau”.

Meanwhile, directly elected legislator Ron Lam U Tou chose to bring to the fore of the plenary a proposal for authorities to allow foreign domestic workers foreigners who have taken two doses of vaccine to enter the SAR after completing a quarantine so as to help resolve a shortage in available domestic helpers.

According to the statistical data, since the beginning of the pandemic in January 2020 the number of non-resident domestic workers in Macau has been decreasing from 30,923 to 26,798 in August this year, including a large number of domestic workers.

“Although over the month’s many opinions have emerged to ask the Government
to allow non-resident domestic servants to enter Macau and meet the requirements of epidemic prevention, it is certain that the authorities did not give serious consideration to this matter, suggesting only to employers to consider hiring Mainland Chinese maids,” he added.

“The salaries of Mainland China domestic workers are nearly double and the supply is very limited (last year there was only an increase of 50 to 60 workers), so it is difficult to meet the high demand for domestic workers.

This shortage in the workforce – coupled with the impossibility of hiring domestic workers who have terminated their employment if they have not exited the SAR to comply with new labour regulations – on families and employed spouses who need to care for the elderly or children.

Lam suggested authorities could follow the example of Hong Kong, which from August of this year, has begun to authorize the entry, under certain conditions, of non-resident domestic servants from the Philippines and Indonesia.

Such workers can only enter Hong Kong after a 21-day quarantine and with a recognized vaccination record, a negative result of the nucleic acid test carried out 72 hours before departure of the flight to Hong Kong, and with the confirmation of booking a room at a hotel in Hong Kong.