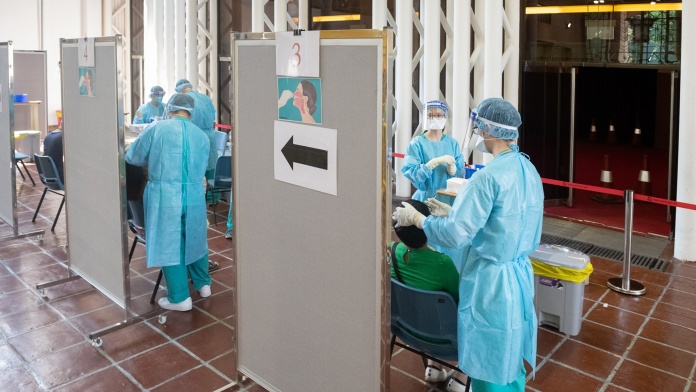 No new confirmed Covid-19 cases have been reported so far, either within the close contacts of the family cluster or during the citywide testing action, health authorities revealed today (Thursday).

Novel Coronavirus Response and Coordination Centre Coordinator Dr. Leong Iek Hou noted in today’s pandemic update press conference that more than 900 people related to the family of four that tested positive this week for the Delta variant are currently under medical observation.

These include 702 close contacts and secondary contacts and 244 people who resided in the red area defined around the residence in the Mei Lin Building at Rua de Coelho do Amaral where the family lived.

The 244 people inside the red area will carry out their second nucleic acid test tonight, with the 720 close and secondary contacts will be tested at least three times during a medical observation arranged according to their own health risk.

Some 18 people that were on the same field trip with the daughter to Xi’an and that are currently in Macau have also tested negative so far and are under medical observation.

As for the family of four, the 12-year-old daughter – believed to be the source of the family cluster – and the 15-year-old son both reported hyposmia – a reduced ability to smell and to detect odours – but no other symptoms; the father (51) had a low-grade fever and a sore throat, and the mother (43) had a sore throat and a cough but no fever.

The parents showed some signs of pneumonia, but the four were said to be in a stable overall condition.

As of 4:00pm today (Thursday, August 5) samples of a total of 376,000 people have been collected in the mass testing drive, accounting for 55 per cent of the total population, and with 115,000 results coming back negative.

The Centre also advised residents that given the large volume of samples collected by the nucleic acid testing program, the time required to upload the test result into the Health Code can take up to two days.

The mass test run will last until 9:00am August 7, with Health Bureau Director saying in today’s pandemic update press conference that the testing process has been greatly improved since the hiccups reported on its first days.

After a request by local authorities, the Guangdong provincial government also dispatched a technical team of 300 qualified health professionals to Macau, which have already completed the border formalities and will be distributed to support the work of the various nucleic acid testing posts.

The added resources are expected to help improve the effectiveness of mass testing and reduce the waiting time for residents.

Under the current testing rate – almost 15,000 people per hour – Dr. Lo believed everyone in Macau could be tested before the three-day period is over.

However, authorities have not yet ruled out the possibility of a second or third mass test actions depending on future test results but emphasized that this would depend on the development of the pandemic.