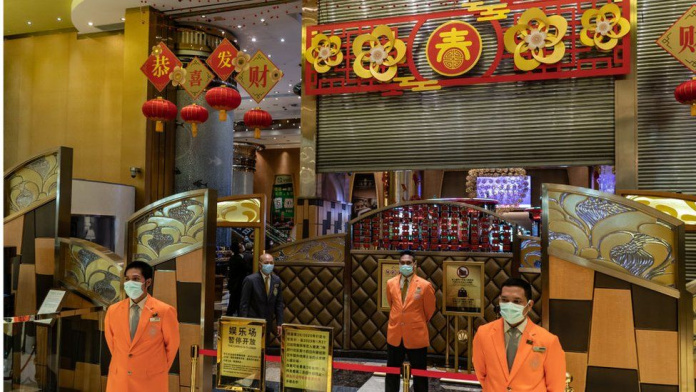 The government does not adopt a “one-size-fits-all approach” in regards to the operation of all casinos in the city amid the latest Covid-19 community outbreak, said Chief Executive Ho Iat Seng today (Thursday).

He made the remarks in a special press conference held today about the latest pandemic situation of Macau, which has reported 110 confirmed cases as of Thursday morning since 18 June.

In light of the latest development, the government has ordered the suspension of all entertainment, sport and leisure venues, as well as the dine-in services of restaurants and drink shops, starting from 5:00 pm today. Casinos are exempt from this blanket ban.

Asked in the press conference about why casinos are still operational, the Chief Executive revealed the government has reached an agreement with casino operators following an unprecedented 15-day suspension of all casinos in the city in the early stage of the pandemic in February 2020.

“We agreed with the casinos at the time [in 2020] that in case of any new confirmed cases found in a casino, only this casino will suspend operation instead of all casinos,” Ho said today. “We are continuing to follow this arrangement and principle.”

Among the 110 new cases confirmed since June 18, four cases were linked to casinos, including two casino croupiers.

But Secretary for Security Wong Sio Chak said in the special press conference today that those two casino croupiers were on leave prior to showing symptoms while the other two did not directly work inside the casinos, adding the Health Bureau, thus, evaluated the casinos in which these four patients work do not have to suspend operation at the moment.

The local gaming regulator, Gaming Inspection and Coordination Bureau (DICJ), also published a statement today, reiterating what Wong has said and stating all casinos have to strictly comply with the anti-epidemic guidelines issued by the Health Bureau.

Nonetheless, he stressed this ban for all entertainment, sport and leisure venues, and restaurants “will be promptly lifted” when there are no more Covid-19 cases in Macau.

Ho also understands the challenges and difficulties experienced by residents and local businesses in the past two years and more. “The pandemic has a severe impact upon the local economy…as it has lasted for nearly three years,” he said. “We know the small-and-medium-sized enterprises have suffered a lot in these past two years and more, and the government has tried and will try its best to help them.”

The government announced on June 19 that it will spend MOP10 billion (US$1.25 billion) for a new round of financial support measures, including one-off subsidies for employees, freelancers and merchants.

“We have prepared a lot of different action plans for the pandemic, which will be announced when it is necessary,” the Chief Executive continued, adding they would strive for a balance between the local economy and its fight against the pandemic.

“The local economy will only restore to the pre-Covid-19 level when the pandemic in Macau is over, when it is over in Mainland China and around the world,” Ho said, adding the current goal of the government at the moment is to restore normal travel arrangements with the mainland.

Prior to this latest community outbreak in Macau since June 18, the city had only maintained largely quarantine-free travel arrangements with the mainland, while people entering Macau from other places in the world must undergo quarantine at designated hotels.