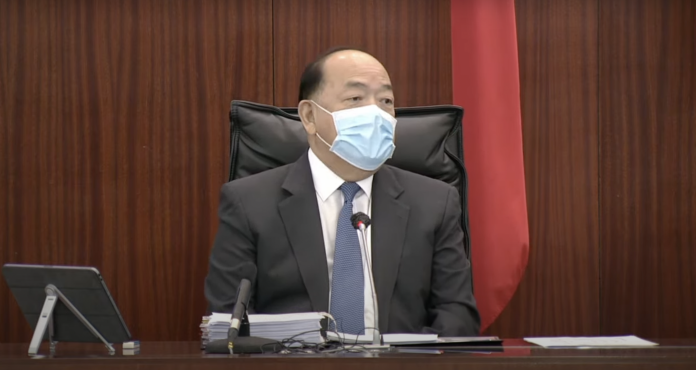 Shortly after the first cases that kickstarted the city’s worst community outbreak on July 19, the SAR government announced a new MOP10 billion (US$1.2 billion) round of pandemic relief measures, with an extra MOP10 billion for financial relief measures for the public and other pandemic-related expenses revealed on June 19.

A budget amendment to account for the first MOP10 billion round has already been completed with administrative regulations that will define new subsidies granted to local employees, business owners, and freelancers, together with other support measures including administrative fee exemptions or refunds and bank loan interest subsidies already completed.

Speaking today in a Legislative Assembly session reserved for questions from legislators and social issues, Ho revealed that the details on the first relief round will be revealed after August 16

“We heard all the opinions from society and the targets of the first round have already been defined, we have defined the details, which will be revealed after August 17,” Ho noted.

As for the second round, authorities are currently studying the opinion submitted by residents and associations, with the CE addressing a recent proposal by the Macau Chinese General Commercial Association for a universal cash subsidy for residents, including consumer cards for non-resident workers.

“Several associations submitted written opinions to the Secretary for Economy, we are analysing them, however providing support to non-resident workers diverges from the previously announced scope of the relief,” Ho added.

“As the government, we will consider the opinions submitted but we can’t accept all of them”

The CE then underlined that only after the specifics of the first round are confirmed, would the details for the second be divulged, with efforts to complete them before the AL annual break.

Ho also addressed a question by legislator Ip Sio Kai, who suggested that setting up a SAR sovereign fund would be more efficient than directly recurring to the local financial reserve.

“Using the financial reserve for pandemic relief is just a palliative, the government has a large financial reserve that should be used carefully. We could use those resources to create an industrial development fund to assist in economic diversification,” Ip stated.

In his reply, Ho warned that the adverse global conditions in the last years have caused losses to many international sovereign funds, with the financial environment calling for caution when using public funds.

The financial reverse of the Macau SAR amounted to MOP613 billion at the end of April, but it reported its fourth consecutive month of value decreases, registering a MOP18.44 billion month-to-month drop.

Despite the economic crisis created by the covid-19 pandemic, the local financial reserve reported growth in 2020 and 2021, despite the use of more than MOP100 billion to balance the budget and bear extraordinary expenses resulting from pandemic relief plans and tax benefits that benefited the population and small and medium-sized companies.

The CE also remembered that the previous administration had already presented a MOP60 billion sovereign fund project in July 2019 that was removed following public opposition.