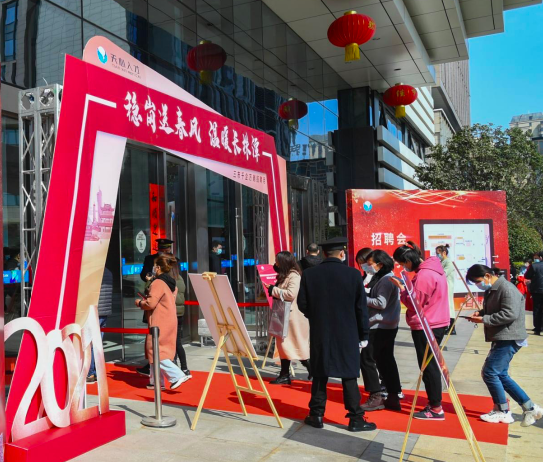 Local youngsters look for opportunities to have a taste of the work culture in Mainland China, ranging from a short internship stint to a long-term job option.

Shirley didn’t expect it would be so difficult to land on a job, when she went for a study trip for half a year in Europe following graduation from the Macau Polytechnic Institute in 2019. Her confidence has taken a beating upon the return to her home when the COVID-19 pandemic has started to turn the city and beyond upside down. “It has been really challenging [for job hunting]: I have sent CV [curriculum vitae] to nearly 20 firms in the past year; only a few got back to me without any offer,” says the local graduate of Chinese-English translation programme.

With the local unemployment rate still hovering at one of the highest levels last seen in a decade despite improvement in recent times, Shirley now looks for opportunities beyond the border. She has applied for a three-month internship scheme tailor-made for Macau youngsters, which is organised in partnership between the Labour Affairs Bureau (DSAL) and ByteDance, a Chinese technology conglomerate acclaimed for its social networking platforms like TikTok, Douyin, and Toutiao. “The mainland Chinese market is bigger [than Macau] with more opportunities — and it’s also almost impossible to look for a job here now — so I think I could learn a lot and accumulate experience for a stint at the mainland technology giant. This will also be beneficial to my career,” Shirley says.

As the coronavirus has continued to wreak havoc on the local economy, together with the government’s efforts in expediting further integration between the two sides in recent years, more youngsters like Lori have started to ponder over the possibilities of employment in the north.

The three-month internship recently rolled out by DSAL and ByteDance provides 48 vacancies in nine different fields in the offices of the latter in Guangdong and Fujian provinces. The programme aims to help Macau youngsters, who graduated from universities in 2019 and 2020, “better understand the new economy, an important growth engine for the nation’s economy, through the workplace,” the bureau notes, referring to the term new economy as high-growth industries relying on technologies.

A total of 169 locals have submitted their applications for the internship scheme, which is expected to start in April with successful candidates each receiving a monthly salary of between RMB2,000 (MOP2,457/US$307) to RMB4,000 from ByteDance and a monthly living subsidy of MOP5,000 (US$625) from DSAL. The bureau highlighted it would reach out to more mainland conglomerates to launch similar schemes for the Macau youth in the future.

Commenting on the internship scheme of ByteDance, which raked in at least RMB180 billion in advertising revenue alone in China in 2020, Kiki Choi Hang Kit, vice-president of the Macau New Chinese Youth Association, says it’s a “precious opportunity” for Macau youngsters to have a taste of working in one of the world’s leading firms amid the pandemic. “With this scheme serving as a pilot programme, the government should gradually roll out more internship schemes with leading firms in different fields in the mainland… so that Macau youngsters could have a better understanding about the dominant industries in the mainland,” she says.

In light of the publication of the outline plan for the Greater Bay Area by the central government in 2019, the Macau authorities have rolled out a number of policies and measures to facilitate more Macau youngsters to work or start up businesses in other cities of the Greater Bay Area, including the information portal and internship schemes.

Besides the recent internship programme DSAL has launched in conjunction with ByteDance, the Talents Development Committee under the Macau government has also worked with the Guangdong authorities since 2019 to put forward a one-month internship scheme for locals every year to have a taste of the work culture across the border in the Greater Bay Area.

Derek was one of some 30 programme participants last year, who worked at a firm in Qianhai, a modern service development zone in Shenzhen, for one month. “We weren’t assigned to undertake many tasks as we were only there for a month, but the organisers had arranged numerous activities and site visits for us to know more about the city,” he says. “The whole trip was an eye-opener for me as I had first-hand experience of the work culture and business environment in the mainland — the business scene in Shenzhen is so burgeoning and prosperous with many start-ups and soaring office towers.”

Still a university student, Derek is interested in returning to work in Shenzhen or other top-tier mainland cities like Shanghai should an opportunity arise. “The discrepancy in the salary level [compared to Macau] will be too big if I do not work in top-tier [mainland cities],” he says.

The salary level in the nearby province is lower albeit hikes in recent years. A research report on the salary trend of Guangdong published lately by the South China Market of Human Resources shows the monthly earnings of workers in Shenzhen averaged RMB10,212 (MOP12,545) in 2020, the highest among all Guangdong cities for the eighth consecutive year. Guangzhou, capital of the province, trailed behind with an average salary of RMB9,366 (MOP11,506) a month, followed by RMB8,100 (MOP9,950) in Zhuhai and RMB7,521 (MOP9,239) in Foshan, says the state-level, state-run human resource service institution, adding Jiangmen was the lowest with RMB6,015 (MOP7,389) a month.

“This experience [of working in the mainland] will be good for my resume, and will also help me develop my personal network as I want to start up my own business in the future,” Derek remarks. “One or two years will be more than enough for me; I don’t have any plans to work and stay there in the long run because the work environment [in the mainland] is more hierarchical with long office hours.”

Albeit the push from the authorities on both sides, there have so far still not been many youngsters, who start their careers across the border. A recent survey conducted by the Macao Media Research Centre last year found that although over 70 percent of the local youth polled said the mainland market had a bright prospect compared with just over 60 percent for the Macau market, they still wanted to work and stay in the city in the long run rather than across the border. In a score scale from 0 to 5 with the highest being the best the local youth gave working in the city an average score of 3.87 while only 2.74 for working in the mainland, the survey said.

Another similar study on the Macau residents’ perception of the Greater Bay Area carried out by the Centre for Macau Studies at the University of Macau in 2019 said that most of the respondents aged 18 or above  — about two-thirds — were not willing to work or live in the mainland cities of Greater Bay Area and cited different lifestyle as the major reason, though young people had a more open attitude.

Working in the mainland has never been an option for Fiona Chan, a local employee in her mid twenties in the hotel industry. “There’s no denying that there are many opportunities in the mainland with the flourishing economy, but it’s more stable to work in Macau and could spend time with my family and friends,” she says. “Neither do I dream of starting up my own business nor am I a high-skilled professional in the fields of finance and technology — I’m happy to stay and work here.”

In the perspective of Carina Leong Sin Man, both the authorities in Macau and the mainland are still “in the beginning stage” to explore their arsenals to encourage more Macau youngsters to begin their northbound adventure. “Macau students studying in Guangdong 10 years ago had limited career options and a job in the mainland was not possible for them at the time,” the secretary-general of the Macau New Chinese Youth Association says. “A decade later this has become feasible.”

For instance, the Guangdong government has opened civil service jobs to Macau and Hong Kong graduates, especially those from mainland universities, since 2019. According to media reports, about 446 Macau and Hong Kong residents applied by the end of last year for five vacancies in the Shenzhen government with an annual salary level of about RMB200,000 (MOP245,691), or RMB16,667 (MOP20,474) a month.

The secretary-general of the youth association also points out the salary gap between Macau and the mainland is closing. “For job positions in the fields of the new economy [in mainland] the salary level at the moment is really not bad, for example, a worker with experiences of five to six years is entitled to an annual salary of RMB400,000,” she illustrates.

“With more successful examples [of Macau residents working in the mainland], the local youth can learn from these role models in the future and broaden their career choices [not only limited to the city],” she adds.