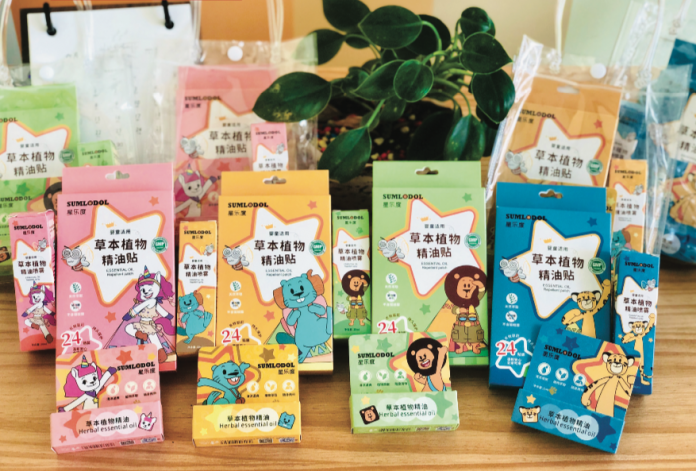 Leveraging the development of Hengqin and the city’s ties with Portuguese-speaking countries, a local firm is actively exploring the business opportunities of essential oils in the TCM segment arising from across the border.

Concerning essential oils, people might think of self-medication, massages or aromatherapy in the western style. But these concentrated liquids could actually be incorporated in the viewpoints of traditional Chinese medicine (TCM). A young Macau entrepreneur, Raymond Choi Si Wei, and his partners have seen opportunities in this niche market, setting up E Dragon International Biotechnology Co Ltd in 2016 and focusing on international trading and the development of TCM essential oils.
“Essential oils were regarded as being quite expensive in the mainland in the past,” says Mr. Choi in an interview. “However, given the rise of the income level and quality of life in the mainland in recent years, the demand for essential oils has been rising [in the mainland market].”
Catering to the increasing number of mainland customers, E Dragon has established a factory in the Shunde District in the city of Foshan in nearby Guangdong province, which does not only manufacture products for the brands developed by the company but also provides OEM (original equipment manufacturer) service for clients in the mainland and beyond. “Many beauty parlours or TCM clinics in the mainland have requested our assistance in making essential oil products for their customers,” the executive director of the company remarks.
Due to the fact that one of the partners of E Dragon has been involved in the essential oil segment for about two decades, the firm could enjoy better pricing in purchasing ingredients and resources of essential oils from France and India. “Thus, we have advantages in controlling the production costs [of essential oils]; the recognition of Macau brands, products and companies are also high in the mainland, which are often associated with quality and high value,” Mr. Choi explains why the company is popular among the mainland clients.

Moreover, one of the reasons E Dragon could successfully establish connections in the mainland is due to its presence in Hengqin, Guangdong. The company incorporated an affiliate, E Dragon Biotechnology (Hengqin) Co Ltd in the nearby island in 2017, which is one of the companies and projects groomed and incubated by the Traditional Chinese Medicine Science and Technology Industrial Park of Co-operation between Guangdong and Macau (GMTCM Park). Official figures show the park — the collaboration project between the authorities from the two sides in Hengqin — has nurtured 210 companies since the inception of its incubation area in 2018, including 50 firms backed by Macau capital, in the fields of TCM, cosmetics, healthcare products, medical equipment, medical services and others.

According to Mr. Choi, the GMTCM Park provides rental subsidies for companies from the city, meaning they could basically occupy an office space in the park for free for about three years. “If we have any questions in the aspect of TCM technology we could also set up a meeting with the responsible team of the park, which would provide us some guidance,” he illustrates.
“The park also offers other types of support like one-stop registration service for businesses, brands and products,” he continues. “Another key support is the business matching service, in which the park introduces some mainland clients for us.”
E Dragon has been in talks with or launched collaboration with at least four mainland companies introduced by the park, and one of them is Sumlodol Hengqin Camping Town. The high-end recreational and multifunctional campground, run by state-owned Zhuhai Da Hengqin Group Co Ltd in the nearby island, and E Dragon’s own brand June&Jane have launched crossover products, namely, essential oils that could be used as repellent sprays. The products could be found in the mainland e-commerce platforms like Taobao and in retail points at the over-28-hectare campground.
“We’re satisfied with this collaboration because there are not many Macau firms that could have partnership with high-caliber firms like Zhuhai Da Hengqin Group,” Mr. Choi says, adding the sales for these crossover products have so far been “decent.”

But it has not been a smooth path for the adventure of E Dragon in Hengqin — which has been designated by the central government as a platform to help the economic diversifications and development of Macau since 2009 — and the mainland market in general. “We have paid attention to the development of the island for a long time, but we still had faced some challenges when we first set foot there,” he remarks.
“One of the challenges is the difference in the taxation regime between the two places — the taxation level in Macau is low while there are different types of levies in the mainland, imposing difficulties in the calculation and control of our production costs in the beginning when we didn’t have a full grasp of the mainland taxation system.”

The entrepreneur also acknowledges great changes are happening on the adjacent 106-square-kilometre island. “When we first entered Hengqin, the business environment and flow of visitors were still underdeveloped at the time,” he exemplifies. “But the infrastructure has been significantly improved in the past two years with other amenities; for instance, it took me an hour in the past to travel from my home in Macau to the Hengqin office, but now it only takes 30-40 minutes with the new Hengqin border terminal and improving road conditions.”

And more changes are expected with the inauguration of the Guangdong-Macau In-depth Cooperation Zone in Hengqin in September. The cooperation zone plan, greenlighted by the Chinese State Council, comes up with an innovative regulatory framework in which both the Macau and Guangdong authorities jointly administer the development of the island to give new room for the long-term prosperity and economic diversifications of the gambling enclave. “We think there will be great opportunities for Macau firms because the land size of Hengqin is almost three times as [big as] Macau,” Mr. Choi says.

One of the cooperation zone’s appeals for E Dragon is that the development plan of the zone mentions the TCM, food and healthcare products produced in Hengqin and registered in Macau could bear the signs of “designed by Macau,” “produced by Macau” or “production supervised by Macau.” Another appeal is the “first-tier” and “second-tier” customs controls for goods stipulated in the plan — simplified procedures for the flow of goods between Hengqin and Macau are stated as the “first tier” of the mechanism, while normal customs procedures between Hengqin and other parts of Mainland China are considered as the “second tier” of the mechanism.

“We will wait for more details of the policies of the in-depth cooperation zone to see whether we might set up a factory in Hengqin because the land cost in Hengqin is relatively more expensive now,” he remarks. “It’s fantastic that the plan highlights TCM as one of the major sectors in the cooperation zone, and we will look forward to more diversifications of the TCM sector on the island — not only focusing on the medicines but also healthcare products like ours.”
E Dragon also wants to see further easing for the flow of capital between Macau and the cooperation zone in the future, given the mainland’s rigid controls in capital outflows. “For instance, we have been incorporated in both Macau and Hengqin, so we hope there will be measures to facilitate capital flow across the border for companies like us,” he illustrates.

In the perspective of Mr. Choi, the recent travel disruptions between Macau and Zhuhai — including Hengqin — caused by the new Covid-19 cases in the city also suggest further improvements are needed in the border measures. In the wake of some new local cases among security guards at local quarantine hotels, housing decoration workers and others in late September and early October, the nearby Zhuhai authorities had demanded all arrivals from Macau must undergo a 14-day mandatory quarantine since late September because the mainland maintains a zero-case strategy in tackling the pandemic. The mandatory quarantine requirement was only lifted after being in place for nearly a month, on 19th October, which has already seriously impacted the normal traffic between the two sides.

“In the past few weeks I was not able to visit my office in Hengqin, and I only worked remotely,” says Mr. Choi. “As the pandemic is expected to continue for some time, we hope there will be specific measures for people like us that have to cross the border daily [in light of new local cases]. Otherwise, what’s the difference between the cooperation zone and other [mainland Chinese] cities.”
“We definitely think Hengqin has a bright prospect, and we’re eager to see the implementation of more measures and policies, as well as a detailed timetable for execution so that companies and residents [from Macau] will have more confidence to explore the arising opportunities,” the entrepreneur continues.

Besides the nearby island, the business development of E Dragon also leverages the city’s role as a commercial and trade service platform between China and Portuguese-speaking countries. Through the assistance provided by the Macau Trade and Investment Promotion Institute, the company has been in talks for collaboration with clients in the Lusophone world like East Timor, Mozambique and Brazil. For instance, the company is now the agent of the Greater China region for a brand of essential oil products from East Timor.

“We’ve also started some research projects with partners in Brazil, and the initial results of the researches show there is an abundance of essential oil resources in the Amazon Rainforest, where at least 100 types of oil resources have not been seen in the mainland market,” Mr. Choi says, who has a master’s degree about Portuguese-speaking countries from the City University of Macau.
“We could make better use of these resources and promote the relevant products in the mainland,” he adds.