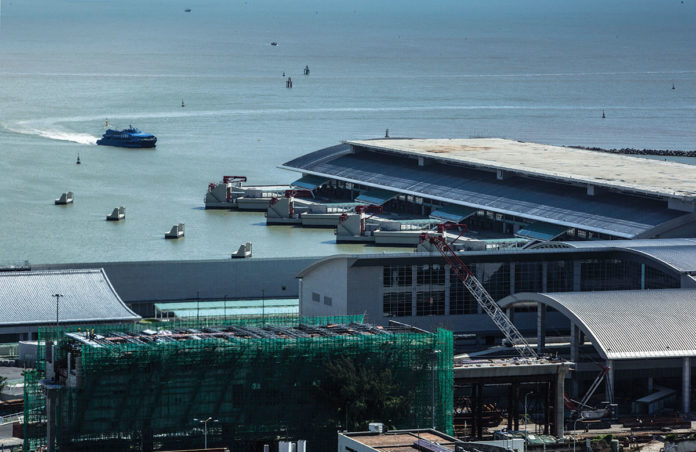 The opening of the new Pac On Ferry Terminal in Taipa will take place in May of this year, according to statements by the director of the Marine and Water Bureau (DSAMA) Susana Wong, to local broadcaster TDM.
According to the DSAMA director, the new ferry terminal is currently undergoing inspections and tests by the department .
“We are making preparations towards this goal [opening in May]. We are having meetings with the ferry companies. They are also testing the facility’s software and hardware,” she noted.
Ms. Wong also revealed that, due to the considerable size of the new terminal, DSAMA will purchase electric vehicles to better facilitate transport within the terminal for the elderly and people with disabilities.
After initial estimates in 2005 that the project would cost about MOP583 million (US$72.95 million) and take up about 50,000 square metres, 12 years later the project is reaching its completion, having expanded to 200,000 square metres at an estimated cost of MOP3.8 billion.
The new terminal will have 16 berths for ferries carrying 400 passengers, three multifunction berths, a helipad with five landing areas and a car park for 1,000 vehicles. A total of 140 Customs officials will be able to handle 400,000 passengers per day.
According to data provided by the Public Security Police Force (PSP), almost 8.1 million crossings were registered at the temporary ferry terminal in Taipa for the whole of 2016, with the Macau Peninsula Outer Harbour ferry terminal registering the majority of crossings by sea, with almost 15.2 million entries in the same year.