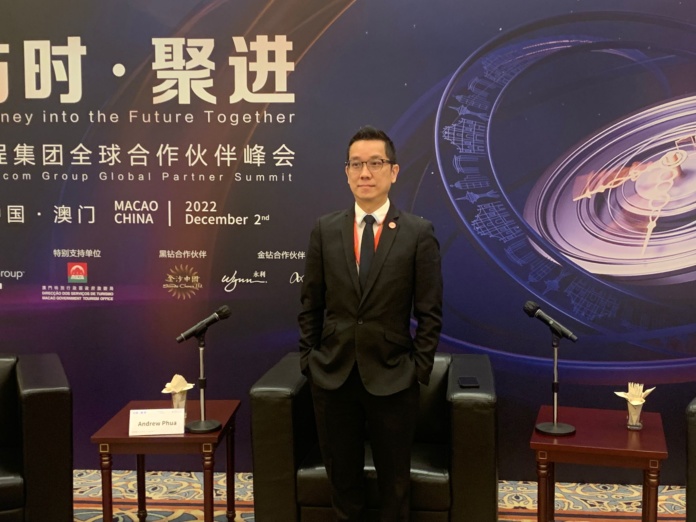 The decision for Singapore to open up to all travellers without quarantine earlier this year does not mean the city state is “lying flat”, said a Singaporean tourism official.

Andrew Phua, Chief Representative and Executive Director (Greater China) of Singapore Tourism Board, made the remarks on the sidelines of the Trip.com Group 2022 Global Partner Summit, which was held in Macau for the second consecutive year.

Detailing the recovery of the tourism market in Singapore after the country has allowed travellers in without quarantine since April, Mr Phua told the media, “Many of my Chinese friends have asked me, ‘Why did Singapore ‘lie flat’ so quickly?’, but the fact is that Singapore has never ‘lain flat’.”

“We just use different approaches and perspectives to see how we can live with the virus,” he said. “The COVID-19 death rate in Singapore is relatively low compared with other parts of the world.”

“Lying flat” means doing nothing in Chinese, and this term has been used by Chinese state-owned media outlets to describe the unpreferable act of lowering one’s guard against the COVID-19 pandemic.

In an English editorial published on Friday, the state-run news agency Xinhua stressed there is “no ‘lying flat’ in China’s COVID battle” and there have not been any changes to the country’s dynamic zero-COVID policy.

Macau Chief Executive Ho Iat Seng has also repeatedly used the term, “lying flat”, in response to demand from some in the local community for the city to open up to international visitation. Macau has only maintained largely quarantine-free travel arrangements with the mainland since the start of the pandemic three years ago, and foreign arrivals in Macau have to undergo five days of hotel quarantine and three days of home quarantine.

Following the opening up earlier this year, Mr Phua said Singapore expects the total number of visitors to the city state this year to range between 4 million and 6 million, about 20-30 per cent of the pre-pandemic volume when the country saw a record high of 19.1 million visitors in 2019.

India and Southeast Asian countries like Indonesia and Malaysia have become Singapore’s top sources of visitors so far this year, replacing China that was its largest feeder market in the pre-COVID era.

Though China now does not rank among the top 10 feeder markets of Singapore, Mr Phua noted on Friday Chinese travellers to the city state are usually businessmen and MICE (meetings, incentives, conferences & exhibitions) visitors now, who actually stay longer and spend more in the country.

February 6, 2023
The Rothschild family is set to take its investment bank private as its holding company...

February 6, 2023
Nurses and ambulances staff stepped up their demands for better pay Monday to combat the...
Load more

Lavrov in Iraq to discuss US sanctions over Ukraine