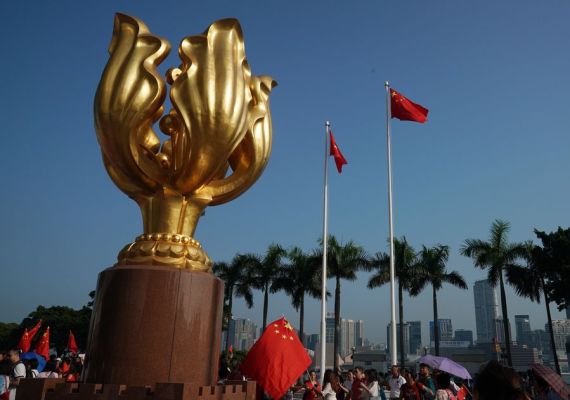 If the Chinese style of elections is characterized by political compromise and some degree of competition, these features can be seen in the way in which the candidates for the new 1,500-member Election Committee (EC) have been nominated.

According to the March 2021 electoral system redesigned by the central government, the EC membership increased from previously 1,200 to currently 1,500, who come from five sectors: (1) the business, commercial, financial and monetary sector; (2) the professional sector; (3) the grassroots, labor and religious sector; (4) Legislative Council members and representatives of district organizations; and (5) the Hong Kong members of the National People’s Congress (NPC), the Chinese People’s Political Consultative Conference (CPPCC) and Hong Kong representatives of nation-wide organizations. The EC members can be returned from three methods: (1) the ex-officio members; (2) nominations from the eligible groups and organizations in different sectors; and (3) the election of candidates by eligible voters in various sectors. The EC will be a powerful body because it will not only continue to elect the Chief Executive of the HKSAR, but also produce 40 Legislative Councilors and nominate all Legislative Council candidates.

Area Committees have been replacing many District Councils to become influential district-level bodies in local politics. Their members were appointed by the HKSAR government and tend to be pro-establishment. The inclusion of Area Committees into the sectors of the EC in March 2021 was viewed by some critics as “unrepresentative.” Nevertheless, the fact that the Areas Committees sectors in both Hong Kong/Kowloon and the New Territories witnessed more candidates than positions illustrated the response of the power elites, who are eager to create an image of competitiveness in these sectors. Objectively speaking, many critics have ignored the socio-political significance of the Areas Committees and Fight Crime Committees, which have traditionally been important for the community leaders and activists to assist the government in local governance since the colonial era in the 1980s.

In the legal sector, a candidate named Bai Tao from a law firm doing business in both Hong Kong and the mainland submitted his nomination form on the last day of the nomination, showing that the power elites hoped to inject an ingredient of competition to some sectors of the EC.

In response to the criticism from critics that the EC election would have a relatively “narrow” base of voters, the pro-Beijing media in the Hong Kong Special Administrative Region (HKSAR) argued that the votes from the related groups and organizations are even “more representative” (Wen Wei Po, August 13, 2021, p. A2). An argument against “unrepresentativeness” is that many groups, such as the commercial and business ones, can represent several thousand members. Another argument for the EC election is that some sectors, such as the food and catering sector, include many organizations (like restaurants in food and catering sector) with different sizes, and therefore group votes are “more representative” and “appropriate” than individual votes. In mainland Chinese elections, groups and organizations are usually more important than individual votes. As such, the Hong Kong EC election is exhibiting more mainland electoral characteristics than ever before.

One interesting hallmark of the candidates running for EC election is that the older generation of business elites stepped down from electoral politics. Prominent businesspeople like Li Ka-shing, Lee Shau-kee, Henry Cheng Kar-shun and Lui Che-woo did not participate in the nomination process. They have been replaced by their younger sons and daughters – a sign of gradual generational change in the politics of nomination and election of the EC.

Another interesting phenomenon of the EC nomination is that in some sectors, candidates would face the experience of drawing lots among themselves to decide who would be “elected” to the EC: accounting, Chinese medicine, technology and innovation (New Territories), religion, and the sector of the Hong Kong groups in the mainland.

The EC will be an important body selecting 40 out of 90 Legislative Council members by the end of 2021. It will also select the new Chief Executive on March 27, 2022. As such, the members of the EC will constitute the most powerful political elites in Hong Kong politics. Its work will ensure that the “patriots” will govern the HKSAR far more effectively than ever before.

In conclusion, the politics of nominating the candidates running for the positions of the 1,500-member Election Committee has opened a new page in the political history of Hong Kong. While political discussions and compromise among some candidates were natural, some degree of electoral competition can be seen. As such, the twin features of political compromise and pluralistic contests are illustrative of the dynamics of selecting the members of the Election Committee in the HKSAR.