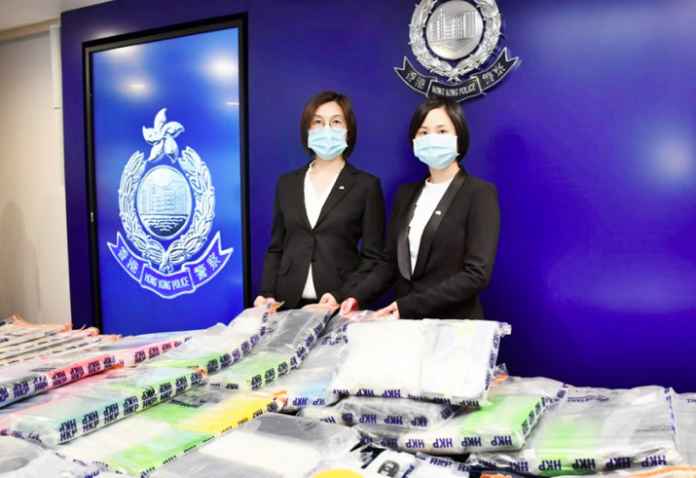 While the United Nations has found that Covid-19 has stimulated the narcotics trade directly or indirectly in many parts of the world, a similar pattern can be found in Hong Kong, with implications for Macau.

Hong Kong has recently witnessed an upsurge in narcotics trade. On July 21, the narcotics bureau of the Hong Kong police smashed two drug trafficking syndicates, arresting five unemployed persons ranging from 17 to 29 years old. Drugs including cocaine, ice and ketamine worth HK$171 million were found and confiscated after the police investigated 19 places in Hong Kong. Some young people were recruited by the organized crime syndicates as marketing agents.

Most importantly, the police uncovered a new pattern of drug trafficking. Specifically, the two drugs trafficking syndicates rented six small warehouses to store their narcotics. They used trucks as a logistical supply chain to transport the drugs to buyers in different places. To protect themselves, organized crime syndicates used video cameras to guard their warehouses and detect whether police came to raid on their drugs storage. This new style of drug trade showed that the criminal syndicates relied on street-level members to distribute narcotics to their buyers without the need for their crime bosses to appear in person. Moreover, the drugs trafficking syndicates mixed the narcotics with all kinds of materials, such as tea bags, pillows and shoes to make it difficult for the police to crack down on their illegal activities.

Drug trafficking syndicates also used hotel rooms, factories, and apartment units as covers to hide their narcotics. The bosses of these syndicates contacted logistics supply companies as the middlemen to transport their drugs to buyers. The warehouses were also locked with smart codes, making it difficult for police to uncover.

According to inspector Chan Kong-ming from the narcotics bureau, a normal process of drugs trade was characterized by the appearance of the real persons to receive the drugs. However, the “new” style of drug trade was characterized by the drugs syndicate receiving the “orders” through telephone calls (RTHK news, July 23, 2021). Then transport agents were provided with a code number to go into the warehouse to acquire the drugs. The whole process did not need the appearance of the sellers concerned, thereby trying to protect the drugs syndicate’s organizers. Such a process could also victimize the persons responsible for transporting the drugs.

On July 20, the narcotics section of the customs and excise department discovered a village farmhouse in Yuen Long where marijuana was grown (Oriental Daily, July 21, 2021, A8). The village house was equipped with air conditioning, ventilation and strong lighting systems. The confiscated marijuana not only amounted to 250 catties and embraced 383 plants, but it also worth HK$ 36 million. The customs and excise authorities estimated that, if three to four months were required for the harvest of marijuana, the village farmhouse could produce one ton of marijuana every year with a market price of HK$150 million. The lucrative nature of harvesting marijuana prompted the criminal elements to grow them at village villas at the risk of being arrested, prosecuted and imprisoned. One arrested suspect used HK$38,000 to rent the village farmhouse and he had already grown the marijuana for three months. The farmhouse was found to have triad background, although the arrested person interestingly did not have triad affiliation.

The narcotics section of the customs and excise department reported that the first quarter of 2021 envisaged a rise of 50 percent of the number of people taking marijuana. Most alarmingly, those marijuana buyers and consumers who were under 21 years old increased by sixfold. Clearly, more young people ran the risk of ruining their health and being arrested. Any person who plants marijuana, according to the dangerous drugs ordinance, can be penalized for HK$100,000 and imprisoned for 15 years, while those who transports dangerous drugs can be penalized for HK$5 million and imprisoned for life.

There was evidence showing that narcotics came into Hong Kong through the border with the mainland. On July 13, the customs and excise officials stopped a truck going into Hong Kong from Shenzhen and they found thirteen types of drugs, including marijuana, cocaine, ice, heroin and ketamine which amounted to HK$1.4 million. One 46-year-old driver was arrested.

There was a tendency for individuals to manufacture narcotics in their own apartment units. On July 14, the police arrested a triad member in Yuen Long where he used his apartment unit to manufacture and store drugs, including 4.5 catties of heroin and drugs-producing equipment. The triad member was arrested together with his girlfriend, both reportedly unemployed. During the persistence of Covid-19, some unemployed people have been resorting to drugs production and trafficking to sustain their livelihood at the risk of being arrested and penalized.

The way in which drug traffickers work has turned out to be far more sophisticated and hidden than before (Ta Kung Pao, July 12, 2021, A14). In one case, after selling all the heroin, a drug distributor in a shopping mall in Mongkok reported to the “big boss,” who then sent his agent to refill heroin in a hidden place. Then the big boss told the distributor to get the heroin, but in the entire process the distributor and the agent did not really know each other. Moreover, the distributor received his payment for his distributing work through various means, including cash coupons in the Jockey Club and Internet bank transfer. To avoid the police from detecting the place where drug syndicate stored its drugs, other agents were sent to conduct surveillance and act as “observers.”

Fortunately, Macau in 2020 witnessed 219 drugs abusers, including 7.3 percent of those who were under 21 years old. It appeared that the young people who committed drugs-related offences decreased. However, 35.5 percent and 19.2 percent of drugs abuse were related to ice and cocaine respectively. There were and are hidden case of drug abuse in Macau. As such, more publicity work against narcotics is necessary in Macau, especially in view of the aggravating situation in Hong Kong.

The narcotics crime in Macau is increasingly related to the use of sea route and couriers for transportation – a new pattern that deserves attention. In January and February 2021, the Macau police uncovered two cases of drug trafficking in which a local person and a Hong Kong man mixed liquid cocaine with red wine to be couriered to Macau. The cocaine liquid amounted to MOP2.46 million.

Moreover, the way in which drugs were transported to Macau displayed a similarly new pattern. Drug traffickers mixed drugs with facial masks and food. In July, three Vietnamese working in hotels were arrested for producing and selling ice. In May, a man who got married with a Vietnamese woman was found to produce and sell cocaine to a small Vietnamese community, earning MOP30,000. In the same month, a Hong Kong-based drug syndicate mailed cocaine and ice stored inside boxes of egg rolls to Macau, where four local people were responsible for distribution and who were arrested by the police. Earlier in March, a Filipino couple was arrested for selling ice amounting to MOP31,000. In September 2020, a Hong Kong man who lived in the mainland was arrested in Macau for arranging ice to be hidden in toys that were mailed to Macau. Overall, small cases of drug trafficking were discovered in Macau, including ethnic minorities and cross-border crime related to Hong Kong.

In the mainland, narcotics-related trade has become prominent. A recent allegation involving a mainland celebrity might be, according to news report, enmeshed in a suspected use of “a new type of drug,” which is increasingly popular in the mainland (HK01.com, July 23, 2021).

This drug is Aphrodisiac, which has been reportedly manufactured extensively in many mainland provinces. The liquid form of Aphrodisiac has been used in cakes and candies, including the element of Gamma-Hydroxybutyrate (GHB) that can control and calm down the neuro system but has the effect of making a person feel tired, sleepy and in lack of energy.

Some criminal elements have reportedly mixed GHB with drinks and alcohol, allowing them to engage in criminal activities, such as thefts, deception and sexual assault. According to medical experts, GHB can make people feel excited, but its excessive usage can lead to the loss of consciousness. If GHB is combined with alcohol, a person who consumes the mixed alcohol can have his or her life endangered. According to the UK Office for National Statistics, from 2014 to 2018, there were 120 cases of death concerning GHB in England and Wales. In Hong Kong, GHB was already integrated into the list of dangerous drugs in October 2010 and any person who smuggles and uses GHB is liable for a penalty of HK$5 million with the possibility of life imprisonment.

In conclusion, drugs-related crime has recently become more prominent in Hong Kong where criminal syndicates are using more hidden and sophisticated methods of production, trafficking and transactions. Macau has been relatively less affected, perhaps fortunately and perhaps thanks to the hard work of the police and the vigilance of the public. However, given the prevalence of drugs-related abuse and trafficking, the law-enforcement authorities in the mainland, Hong Kong and Macau will have to strengthen their cross-border cooperation in the joint combat against narcotics, especially targeting at the young people who can be easily under the temptation of drugs abuse.