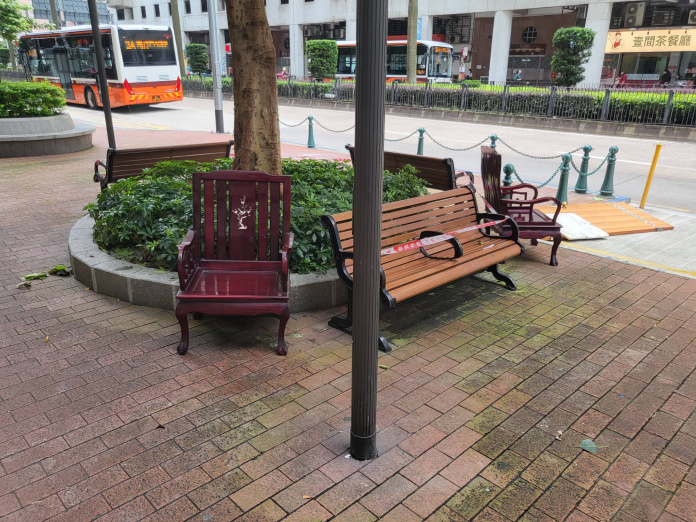 Older Chinese are probably my favourite people in the world. They have this talent to perfectly blend courtesy and carefree spirit with an enviable disregard for the opinions of others.

This can lead them to the most unbelievable public displays, from hanging their multiple bird collection in public trees, sporting now infamous ‘mankinis’ or cutting their toenails inside buses.

As we trod along what is either the end of the world or another study case of mass hysteria, I couldn’t help but admire the hutzpa of some elder Chinese residents when faced with the wrecking ball of recent pandemic restrictions.

It has been a hard two years for older Chinese, forced to learn how to use a 5th generation smartphone to keep up with all individual health codes, barred from entering their favourite parks and yam chas, or having people wanting to vaccinate them left and right.

Just two days after the state of immediate prevention was announced municipal workers rushed to seal the public benches in the neighbourhood near my office in Areia Preta with police tape.

This was of course crucial, not least some gatherings of the usual one or two older Chinese men playing cards were to arise and destroy our pandemic prevention efforts in one clean sweep.

I was worried about the elder Chinese gentleman I would usually see on a specific bench, crane in hand, wearing a wife-beater and smoking cigarettes as if they were tic-tacs. Where would he be sitting now to observe the daily riff-raff?

I was quickly left reassured after checking he had brought his own heavy wood furniture from his house and placed it strategically on the side of the now sealed public benches.

That’s another thing about older Chinese, they have a very flexible approach to municipal regulations.

The city says residents can’t use public exercise machines? They will use them to dry their bed covers. A fancy new footbridge is built? They will risk their lives crossing the street to save because it’s faster.

Older Chinese will usually do what’s more practical and sensible to them and have no patience for nonsense regulations.

That’s why I couldn’t help but feel sad when this week I saw a 70-year-old resident being dragged away by three police officers double his side from a public bus after he insisted on taking his usual route despite not having a green health code. Was this really necessary?

I’m not urging mass public disobedience, I’m just saying I understand the feeling. Elderly residents are as frustrated as everyone else for not being able to live their normal lives at the moment, they just have less patience to deal with it sometimes than others.

In the end, they are technically the age group in the most danger in case of a Covid-19 infection, so if they don’t care, should we be really forcing them to stay at home?

If I had been through half of what they had for most of their lives, maybe I would have little patience for nonsense too.