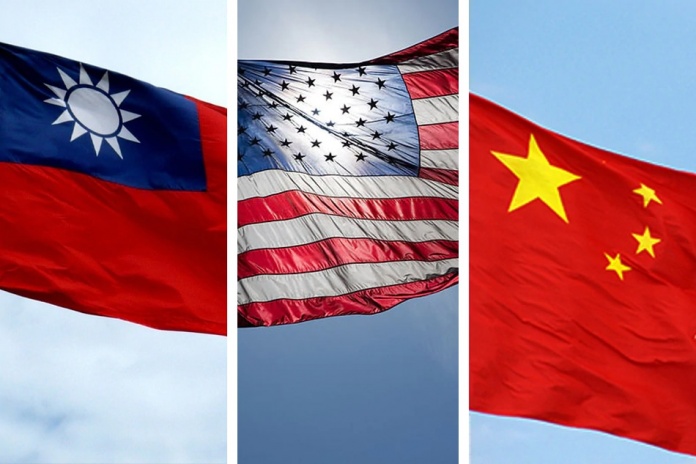 Judging from the political context and context of the visit of a delegation of former US officials to Taiwan from April 15 to 17, the US government is now adopting a new policy of engaging not only Taiwan but also Japan in its assertive policy toward the People’s Republic of China (PRC).

The delegates were composed of including the former Senator Christopher Dodd, former assistant secretary of state Richard Armitage, assistant secretary of state James Steinberg and the US State Department’s Taiwan coordinator Dan Biers. They arrived at the Taiwan international airport in the afternoon of April 15, when Taiwan foreign minister Joseph Wu and Director of American Institute in Taiwan (AIT) Brent Christensen greeted them.

Christopher Dodd is reportedly a close friend of US President Joe Biden. On April 14, the PRC Foreign Ministry spokesman Zhao Lijian said that the US “should immediately stop any kind of formal interactions between the US and Taiwan,” and that the US “should manage the Taiwan affairs carefully.” During Zhao’s press conference, a reporter mentioned that the US delegates would meet Taiwan president Tsai Ing-wen, but Zhao remarked that Tsai “is only a local leader of China,” and that the US should adhere to the principle of one China “without creating any wrong signal to the forces of Taiwan independence” and “without seriously undermining Sino-US relations and the peace and stability of the Taiwan Strait.”

On the night of April 15, Taiwan’s leader Tsai Ing-wen hosted a dinner to receive the four-member delegation from the US. The Taiwan side witnessed the attendance of vice-president William Lai, National Security Council secretary Wellington Koo, defence secretary Chiu Kuo-cheng, and Executive Yuan minister John Deng Chen-chung (who deals with trade affairs). The line-up of the Taiwan side showed that the Taiwan government was interested in three major issues impinging on the Taiwan Strait and US-Taiwan relations, namely national security, national defence and trade. Tsai remarked in the dinner that she expected both Taiwan and the US would deepen their partnership. In her earlier meeting with the delegation, Tsai went so far as to assert that Taiwan would be willing to cooperate with those “ideologically close partners” in the Indo-Pacific region to “stop adventurist and provocative behaviour.”

On April 15, the US delegation met six members of the Taiwan Legislative Yuan. The US side was deeply interested in the attitude of the Kuomintang toward the 1992 consensus. KMT members replied that they would not change their view toward the 1992 consensus, but the 1992 consensus was not equivalent to the “one country, two systems.” KMT legislators who met the three delegates also said that the party would not accept the “one country, two systems” (Liberty Times, April 15, 2021). The KMT members spent considerable time to discuss with the Americans on the 1992 consensus while refraining from mentioning the party’s opposition to the import of American pork to Taiwan. The US delegates were interested in the attitude of the young Taiwanese toward the US and the prospects of any military conflicts.

One young KMT member, Charles Chen, said that the young people of Taiwan are unfamiliar with both the US and mainland China, and that they lack an international outlook. Chen added that the Taiwan youth are not afraid of cross-Strait conflicts and yet they have not shown their eagerness to join the Taiwan military. Yet, DPP member Lo Chih-cheng argued against Chen’s perspective, saying that the Taiwan youth are international in their outlook, and that they support Tsai Ing-wen while opposing the PRC. Most importantly, the Hong Kong factor is important in the minds of many Taiwan youths. Another legislator, Kao Hung-an from the People Party (PP), said that Taiwan should cooperate with the US more in the development of the semi-conductor industry and its supply chain.

On the same day, Taiwan Premier Soo Tsing-tshiong met the US delegates and expressed his view that the trade relations between Taiwan and the US could be strengthened, including the possibility of re-negotiating the Trade Investment Framework Agreement and the Bilateral Trade Agreement, for the sake of achieving mutual economic prosperity. Soo said that the delegation’s visit was historically very significant. In response to Soo’s remarks, Dodd said that their visit took place at a significant juncture, and that the delegation “represents the importance of Taiwan to the US and the American partisan support of Taiwan” (Liberty Times, April 15, 2021). Soo added that Taiwan would like to get the US support for it to join more international trade organizations, while affirming Taiwan’s commitment to coping with climate change through the efforts at reducing coal usage, controlling carbon emission and enhancing energy transition.

On April 17, KMT young leader Chiang Wan-an revealed to the Taiwan media that, on April 15, as one of the six legislators meeting the US delegation, he said the 1992 consensus was not equivalent to “one country, two systems.” Moreover, Chiang added that the KMT “resolutely opposes the ‘one country, two systems’ and that the party is now deliberating on whether a new and concrete stance would come out “if the 1992 consensus were not accepted by most of the people” (Liberty Times, April 17, 2021). As one of the charismatic young KMT leader, Chiang’s remarks could be seen as not only representing the perspective of the Young Turks within the blue camp, but also drifting toward the light green direction.

On April 17, Sandra Oudkirk, the US State Department’s Bureau of East Asian and Pacific Affairs deputy assistant secretary of state, remarked in a talk at the Heritage Foundation that the Biden administration approved the new guidelines of enhancing unofficial interactions between the US and Taiwan sides, and that these new interactions represented “a huge step forward” from the old guidelines in 2015. She added that the US and Taiwan cooperate in many areas, including maritime collaboration between the coast guard of the two sides and the Global Cooperation Training Framework. She engaged in a virtual discussion with Taiwan’s deputy foreign minister Tien Chung-kwang, noting that the new guidelines “explicitly encourages engagement with Taiwanese counterparts” and “removes overly-onerous restrictions that complicated our ability to engage with Taiwan on issues of mutual concerns.”

The new guidelines are reportedly allowing US officials to hold regular meetings with Taiwanese counterparts in US federal buildings and at Taiwan’s representative offices in America. They allow US officials to attend events at Twin Oaks, the former Taiwan’s ambassadors’ residence in the US which is now used for official functions, but the new guidelines prohibit US officials from attending events on Taiwan’s holidays, such as the double tenth national day, which could be regarded as conflicting with America’s one-China policy (Focus Taiwan, April 17, 2021). The old guidelines were removed by the former secretary of state Mike Pompeo. His successor Anthony Blinken favours the expansion of US contacts with Taiwan.

While the US delegation’s visit to Taiwan and the relaxed US guidelines on closer US-Taiwan interactions displeased and provoked the PRC, another provocative gesture was made by a declaration jointly issued by Japanese Prime Minister Yoshihide Suga and US President Joe Biden after Suga’s visit to the US on April 15. On April 16, Biden and Suga addressed a whole range of geopolitical issues in the joint statement, including “the importance of peace and stability of the Taiwan Strait” (Reuters, April 17, 2021). President Biden said in a press conference: “Today Prime Minister Suga and I affirmed our ironclad support for the US-Japanese alliance and for our shared security. We [are] committed to working together to take on the challenges from China and on issues like the East China Sea, the South China Sea, as well as North Korea, to ensure a future of a free and open Indo-Pacific.” Biden and Suga also talked about the developments in Hong Kong and Xinjiang.

In response, the PRC Embassy in Washington said that China is “resolutely opposed” to their joint statement and that Taiwan, Hong Kong and Xinjiang belong to China’s internal affairs. From April 15 to 20, the PRC military conducted exercises in the South China Sea, a move coincidentally matching the visit of the US delegation to Taiwan.

Analytically speaking, the content and context of the US delegation to Taiwan became politically provocative. First, the four-member delegation included an official from the State Department, showing perhaps the implementation of the relaxed new guidelines from the US on closer contacts with Taiwan. Second, three members of the delegation were formerly high-ranking officials and their high-level reception by the Taiwan side officially illustrated a new era of US-Taiwan contacts. Third, the US delegation also aimed at probing the responses of the Taiwan people, including legislators and their younger generation, to not only Taiwan’s relations with mainland China but also the prospects of conflicts in the Taiwan Strait. Fourth, the joint statement issued by US and Japan covered Taiwan – an unprecedented move that has already triggered a strong reaction from the Chinese Embassy in Washington.

In conclusion, the visit of the US delegation to Taiwan represented a new era of US-Taiwan contacts under the Biden administration. Its visit achieved the objective of demonstrating the importance that the US attaches to Taiwan in the security, defence and economic spheres. Given that the Biden administration is determined to assertively and actively engages with Taiwan in various aspects, and that Japan as a US ally is increasingly dragged into the complex triangular Beijing-Washington-Taipei politics, Taiwan is going to be an inevitably bone of contention between the US and China in the years to come.