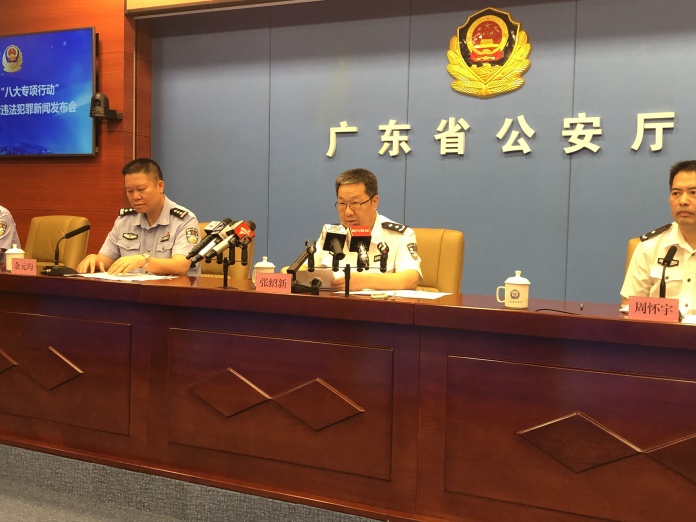 On June 25, the Guangdong Public Security Bureau (PSB) announced that Operation Thunderbolt 2021was conducted jointly by the police in Guangdong, Hong Kong and Macau to smash not only weapons, drugs and smuggling syndicates but also cross-border crime. The Guangdong PSB cracked down on 824 criminal cases and arrested 1,422 criminal suspects. From June 18 to 19, it had investigated 5,700 entertainment venues and arrested 619 suspects, while simultaneously punishing 803 members who violated the law and confiscating 7 guns with 164 bullets.

Moreover, the police in Guangdong, Hong Kong and Macau smashed a cross-border criminal syndicate in Zhuhai and Zhongshan areas where a gang of cheating money through money exchange led to a murder case. On June 12, the Macau police discovered that a suspect who murdered a victim in Macau sneaked into the mainland, thereby requesting assistance from the Guangdong PSB. On June 13, the Guangdong PSB swiftly arrested the suspect who committed the murder – an evidence in the triumph of cross-border police cooperation.

At the same time, the Shenzhen police collaborated with the marine police to smash smuggling syndicates which smuggled froze meat from Hong Kong to the mainland. Five boats were confiscated, and eight tons of smuggled food and products were found.

From June 6 to 18, the Hong Kong police cracked down on vices, investigated 542 entertainment venues, arrested 868 persons ranging from 13 to 84 years old, including 31 mainlanders and 49 non-Chinese. A total amount of HK$6 million worth of drugs was confiscated, including heroin, cocaine, ketamine, methamphetamine, and midazolam.

On June 19, the Macau police mobilized 380 officers, including six teams of police dogs, to conduct raids on entertainment venues in the Macau Peninsula and Taipa Island. The police also conducted investigations on the boats in the harbor and the coastal regions. The operation began from 11 pm and lasted until 3 am on the morning of June 20.

During the entire operation, the Macau police investigated 1,822 persons, including 34 persons who were brought to the police stations for further in-depth investigation. Fourteen of the 34 suspects were found to organize and participate in syndicates that cheated money from ordinary citizens through money exchange. Twelve mainlanders were arrested for overstaying in Macau. Moreover, a speedboat was stopped for smuggling luxurious food products, such as bird nest, and frozen meat from Macau to the mainland. Two smugglers were charged of violating the law on external trade; they tried to escape but were arrested by the marine police.

According to the Macau police, Operation Thunderbolt was characterized by the close cooperation and intelligence-sharing activities of the police in Guangdong, Hong Kong and Macau. The Macau police adopted the strategy of focusing on Macau’s law and order, conducting regular assessment, coordinating and directing subordinate units to conduct patrols and raids irregularly and in different targets. The three-way police cooperation between Guangdong, Hong Kong and Macau aims at destroying cross-border crime, especially illegal entry and exit as well as smuggling activities.

The ongoing anti-crime policy wind has tremendous implications for the good governance of Guangdong, Hong Kong and Macau.

First and foremost, the 100thanniversary of the Chinese Communist Party of China has significant impacts on the anti-crime policy wind, which must be held to pave the way for the national celebration on October 1. If the mainland is characterized by the deployment of law and police to maintain social order, the same phenomenon can be found in Hong Kong and Macau. In the case of Hong Kong, the promulgation of the national security law in late June 2020 and its implementation afterwards are a testimony to the determination of the central government to use legalism to maintain law and order in the special administrative region. As Hong Kong is approaching the 24thanniversary of its return of sovereignty to China on July 1, 2021, the maintenance of law and order is high on the policy priority of the agenda of the central authorities and the government of the Hong Kong Special Administrative Region (HKSAR).

Second, the anti-crime policy wind in the Guangdong-Hong Kong-Macau region has been accompanied by a significant personnel reshuffle at the top level of the HKSAR administration. On June 25, as mentioned before, the former Police Commissioner Chris Tang was appointed as the new Secretary for Security, while Deputy Police Commissioner Raymond Siu was promoted as the new Police Commissioner. Most importantly, the former Secretary for Security, John Lee, was promoted to be the Chief Secretary of the HKSAR government – an announcement made by the State Council of the Hong Kong Macau Affairs Office.

A reading of John Lee’s track record showed that he contributed immensely to the maintenance of law and order in the HKSAR. According to Ta Kung Pao on June 26, Lee played a crucial role in banning the operation of the Hong Kong National Party in September 2018 and in the use of the national security law in May 2021 to freeze parts of the asset of the Next Magazine and the assets of three companies possessed by Jimmy Lai (Ta Kung Pao, June 26, 2021, p. A1). His work was obviously appraised by the central authorities positively.

Lee’s appointment as the Chief Secretary was unprecedented in the personnel arrangements of the top level of the HKSAR administration. For the first time in the history of the HKSAR, a former Deputy Police Commissioner was eventually promoted as the Chief Secretary, a position that was usually occupied by former career civil servants (like Anson Chan, Donald Tsang, Matthew Cheung) and occasionally non-civil servant (Henry Tang).

Some Hong Kong commentators have quickly pointed to the importance of former police officers occupying the key positions of Chief Secretary and Secretary for Security – an accurate observation however neglecting the fact that the new appointments aim at not only stabilizing the HKSAR’s law and order situation but also, as Chief Executive Carrie Lam remarked in her press conference on June 25, paving the way for the stability of the new HKSAR administration starting from July 1, 2022.

In other words, the continuity of maintaining social stability, law and order is of paramount importance to both the HKSAR and the central authorities from 2021 to 2022, a key transition period during which there would be three elections – the election of the members of the new Election Committee, the Legislative Council election, and the new Chief Executive elections. As the new Secretary for Security, Chris Tang, said in his short remarks during the press conference on June 26, he and his colleagues would try their very best to deal with the “safety and stability” of the three elections and to “prevent and fight some local terrorism and those activities of external forces that use Hong Kong as an agent to endanger the national security of Hong Kong and our country (Ta Kung Pao, June 26, 2021, p. A1).”

Third, the current anti-crime policy wind aims at consolidating the law-and-order situation of Macau, where the new Legislative Council election will be held in September 2021 and where the 22ndanniversary of its transfer of sovereignty to China will take place on December 20 later this year. As such, the year of 2021 is of paramount political importance to the central authorities, the HKSAR and the Macau special administrative region.

In conclusion, the ongoing anti-crime policy wind in the Guangdong-Hong Kong-Macau region is politically significant. Under the circumstances in which October 1 will be the national celebration of the 100thanniversary of the ruling party in China, July 1 will be the 24thanniversary of the HKSAR return to the motherland, and December 20 will be the 22ndanniversary of Macau’s return to the Chinese nation, the maintenance of law and order in Guangdong, Hong Kong and Macau has special meaning. If “cleaning the floor to ensure peace” is a Chinese saying on a precondition of preparing for the forthcoming celebrative activities, the anti-crime policy wind must be analyzed and understood in the broader and macro-level political context of Hong Kong and Macau.