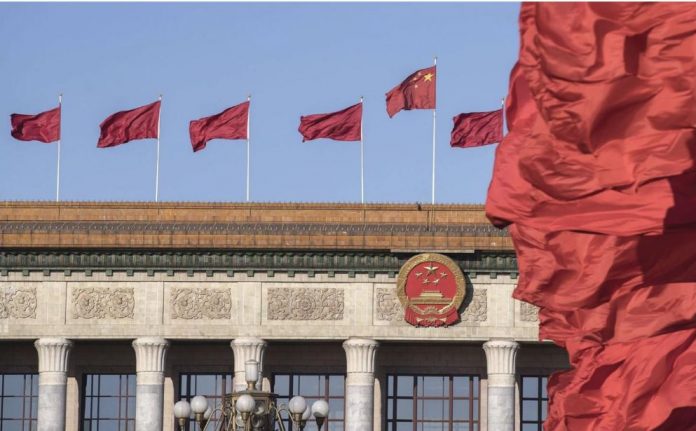 On July 29, the press briefing held by the Hong Kong and Macau Affairs Office (HKMAO) of the People’s Republic of China (PRC) on the Hong Kong disturbances in June and July was a testimony to the continual implementation of Beijing’s national security policy on Hong Kong, a policy that had already been established in the 2014 White Paper on the practice of the “one country, two systems.” The White Paper emphasized Beijing’s “comprehensive jurisdiction” over Hong Kong.

The HKMAO officials on July 29 emphasized three hopes, four assertions and three bottom lines. First, it emphasized that the societal sectors of Hong Kong should resolutely oppose and resist violence, protect the rule of law, and focus on the development of economy and people’s livelihood so that Hong Kong would go out from the pitfalls of political disputes.

Second, the HKMAO resolutely supports the Carrie Lam administration, backs up the police action of maintaining law and order, supports the judicial authorities of Hong Kong to penalize violent and criminal elements in accordance with the law, and shores up the action of the patriotic forces to defend the rule of law.

Third, it lays down three bottom lines of Beijing’s limit of tolerance, namely disallowing any action to undermine national sovereignty and safety, forbidding any action of challenging the power of the central authorities and the authority of the Basic Law, and prohibiting any action of using Hong Kong to infiltrate into the mainland and to conduct “damaging” activities.

The HKMAO spokesman Yang Guang repeated his strong support of the Hong Kong police, saying that the urgent task for Hong Kong is to punish the criminal and violent elements, and that energy and focus should be paid on the development of the economy and improvement of the people’s livelihood.

One day after the HKMAO’s statements, the Hong Kong police on the night of July 30 arrested 49 protestors who confronted the police in the Western and Central Districts. Of the 49 arrested persons, 44 of them were charged for rioting.

On July 31, Tung Chee-hwa, the vice-chairman of the Chinese People’s Political Consultative Conference, said that external forces were suspected of being involved in the anti-extradition movement, including Taiwan and the United States. He admitted that more work on the youth should be conducted to win their hearts and minds.

On the same day, the PRC government announced that the individual visits from the mainland to Taiwan would be terminated from August 1 onwards. Some observers have believed that the move was aimed at reducing the popularity of the pro-independence Democratic Progressive Party (DPP), which has recently been critical of the “one country, two systems” and has supported the action of those Hong Kong people to oppose the extradition bill.

Beijing’s sudden move on Taiwan might also be interpreted as a move to retaliate against Taiwan’s intention of providing a sanctuary to about 40 Hong Kong people, who escaped to Taiwan shortly after their activities of occupying and vandalizing the Legislative Council on July 1, a movement that infuriated the PRC.

The HKMAO remarks on the Hong Kong crisis were significant in four aspects.

The HKMAO position had already been covered by the remarks made by the Director of the Central Government Liaison Office, Wang Zhimin, on July 12 when he backed up Chief Executive Carrie Lam, severely condemned the occupy Legislative Council action, and supported the police. Wang on July 22 also condemned the radical action of some protestors who threw eggs and sprayed graffiti on the walls of the Liaison Office building, and who defaced the PRC’s national emblem.

The action of the radical protestors alienated the PRC leadership and officials responsible for Hong Kong matters. As such, the implementation of the PRC’s national security requires an immediate punishment of protestors. This explained why the Hong Kong police took swift action of arresting and some protestors the day immediately after the HKMAO statements on July 29.

Second, Beijing’s strategy on Hong Kong is clear, asking the HKSAR leadership to hold the current situation during the transition to the presidential election in Taiwan in January 2020.

Any further move to blacken the image of “one country, two systems,” in the minds of Beijing, must favour the DPP in its current campaign leading up to January 2020 presidential election. Hence, Beijing has already adopted a two-pronged strategy on Taiwan, firstly controlling the situation in Hong Kong swiftly through a punitive directive against local protestors and secondly stopping the mainlanders’ visits to Taiwan at least in the short run until the time when the election outcome will be clear in January 2020.

Third, Beijing encourages the Hong Kong government to come up with concrete policy measures to address the economic and social grievances of the ordinary people, including youth discontent, in the upcoming policy address in October.

Fourth, Beijing has been renewing and reactivating its united front work in Hong Kong through the work of local pro-Beijing forces and the attacks made by pro-mainland media, groups and politicians on the pan-democratic front. The pro-Beijing forces have been consolidating their constituency work at the grassroots level to prepare for the November 2019 District Councils elections.

On the other hand, the pro-Beijing mass media have criticized the radical protestors and democrats for forming a “pro-violence” faction destabilizing Hong Kong. Any missteps made by the pan-democrats, especially some radical protestors whose action can tarnish the image of the entire pro-democracy camp easily, would be electorally beneficial to the pro-Beijing forces.

However, the Beijing strategy entails political risks. First, by avoiding any discussion on the Yuen Long terrorist attack by the suspected triad members on July 21, the HKMAO responses to the Hong Kong disturbances could not really appease the anger of many Hong Kong residents, who firmly believe that the local police failed to protect ordinary citizens in the suspected triad attack on passengers in the Yuen Long railway station.

Some netizens have kept on harping the theme of the so-called “collusion” between a minority of police officers and the suspected triad forces. These public perceptions are unfortunately detrimental to the police image, reputation, operation and legitimacy.

Perhaps fortunately, the Independent Commission Against Corruption (ICAC) has reportedly initiated an investigation into the police inaction in Yuen Long on July 21, hopefully coming up with an investigative result that would later repair the damage that has already been done on the legitimacy of both the police and the Hong Kong leadership.

Second, as the police arrest more protestors and when the prosecution of law-breakers proceeds, some members of the public would likely develop a victimized mentality, thereby strengthening the determination of some radical protestors to continue confronting with the police.

Hence, chronic protests would likely persist at least until the campaign period of the November District Councils elections. Any election-related violence would likely affect the performance and results of the pan-democratic camp, because the pro-Beijing media, groups and politicians would put the blame of the persistence of violence on their political foes.

On the other hand, some moderate democrats would likely develop a more cautious approach to dealing with protests. Any continuous radical protests would undermine the pan-democratic front not only in the 2019 District Councils elections but also the 2020 Legislative Council elections.

Edward Leung Tin-kei, who is now serving a six-year prison sentence for his participation in the 2016 Mongkok riot, appealed on July 29 to radical protestors not to be dominated by hatred. He urged his supporters and radical protestors for political patience. However, under the atmosphere of protest radicalism, political hyperpoliticization and ideological polarization, Leung’s appeal to the radical protestors may not work.

Overall, the Hong Kong disturbances in June and July 2019 will continue for some time. The strategy of the central government in Beijing is clear and consistent with its national security emphasis of the President Xi Jinping era since November 2012.

As the PRC is enjoying its 70th anniversary in the year 2019, the Hong Kong disturbances have to be put under control in the eyes of the central leadership, especially if the “one country, two systems” was mentioned by President Xi in December 2018 to appeal to Taiwan for political talks in the future.

Even though Taiwan’s ruling DPP rejects this idea, Beijing hopes that the image of Hong Kong’s “one country, two systems” will not deteriorate to such an extent as to undermine the chance of victory of the pro-reunification Kuomintang in the January 2020 presidential election.