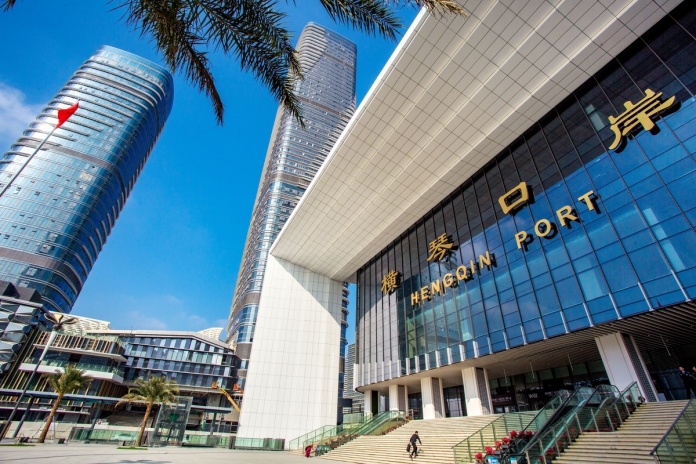 Judging from the context and content of the central government’s integration blueprint on Macau-Hengqin Cooperation Zone and the Hong Kong-Qianhai developmental areas, it is quite likely that Beijing has a holistic plan of moving Macau-Hengqin zone and Hong Kong-Qianhai zone toward a possible territorial merger near the year of 2049 and 2047, respectively, with very significant geopolitical implications for Beijing-Taipei economic interactions in the long run.

The Macau-Hengqin Cooperation Zone has revealed its institutional structures three days after the Macau government published its consultative document on the amendment of Law No. 16/2001 (Legal Framework for the Operations of Casino Games of Fortune). The Hengqin Island is divided into two parts: one under Macau’s administration and the other cooperative zone under the mutual governance of Guangdong and Macau. This cooperative zone is characterized by a joint governance structure, namely the Management Committee of the Cooperation Zone, which is led by the Guangdong Governor Ma Xingrui and Macau Chief Executive Ho Iat Seng and under which the executive deputy director is the Macau Secretary for Administration and Justice, Cheong Weng Chon. Under the Management Committee, a secretariat and an executive committee led by Macau Secretary for Economy and Finance, Lei Wai Nong, are formed to oversee several bureaus, including administration, law, economy, monetary and financial development, commerce, treasury, statistics, urban planning and construction, and the people’s livelihood. Macau people can arrange driving licenses and permits to go in and out of Hengqin, while the Macau East-West Meeting Point (Hengqin) Development Company has become one of the 33 projects going into the Guangdong-Macau Cooperative Industrial Park (Ming Pao, September 18, 2021).

This Cooperation Zone aims at making Macau’s economy more diversified than ever before. According to the Hengqin-Guangdong-Macau In-depth Cooperation Zone’s Construction Blueprint published on September 5, the new zone aims at helping Macau’s economic diversification, population movement to reside in Hengqin, and the expansion of social services in 2024. In 2029, the four areas of developing Macau’s economic diversification – Chinese medicine, innovation and high-tech industry, cultural and convention exhibition center, and modern monetary and financial center – will be expected to make “prominent achievements.” In 2035, it is expected that all the four realms of Macau’s economic diversification will be achieved. As such, a clear timeline is outlined in the important document designed by the central authorities and with the active participation of Guangdong provincial and Hengqin-Macau local authorities.

To stimulate economic development and investment, the Zone is going to levy 15 percent enterprise tax while “exempting parts of individual income taxes that are over 15 percent” to attract talents to work and stay there. While Macau youths are encouraged to work and live in Hengqin, a whole range of social services will be provided and expanded in the Zone. Transportation links like Macau Light Rail will be extended into Hengqin. Under these circumstances, Hengqin-Macau will be integrated as oneness or “yi tihua” with the first line being opened and second line under controlled (Blueprint, p. 11). The second line will have goods entering the mainland with more elaborated custom and immigration control and taxes levied. Clearly, three lines of administrative structure has been established, with the possibility of moving these administrative lines in accordance with geoeconomics and political needs in the long run.

The establishment of the Cooperation Zone is marked by the necessity of party building (Blueprint, pp. 17-18), meaning that political and legal protection is necessary for the governance of the Zone. The Party’s construction is put on the priority of the agenda of development, meaning that the process of opening up Hengqin to Macau must be characterized by the leadership of the Chinese Communist Party. The protection of the rule of law is emphasized in the Blueprint, giving Zhuhai certain degree of autonomy in legislative affairs so that the Zone’s “commercial and civil regulations will converge with Macau” (Blueprint, p. 18). Other areas of risks management, like anti-terrorism, anti-tax evasion and anti-money laundering will be monitored in the name of “emphasizing the thinking of bottom line (p. 19).” In a nutshell, the entire Blueprint is characterized by mutual governance structure, gradual and orderly openness, necessary control in the areas of tax, customs and cross-boundary crimes, and the realization of the plan of making Macau’s economy more diversified and less reliant on the casino industry.

Under this broader context of economic diversification, the Macau government’s consultative document on the amendment of Law No. 16/2001 is politically significant and administratively progressive. The document delineates several areas of casino concessionaries that will need more governmental control: (1) the emphasis on the quality rather than the quantity of concessionaries; (2) the flexibility in the period of the concessionaries to be granted; (3) more control over the capital requirement of the concessionaries; (4) the localization of the membership of the Board of Directors; (5) the governmental approval of profit sharing by concessionaries; (6) employees training and protection; (7) more control over the intermediaries and their related background checks; (8) the strategic development of non-gaming areas so as to stimulate the growth of small and medium enterprises; (9) the enhancement of social responsibility through the 4 percent tax levy that will be used for the development of culture, charity and urban development; and most importantly (10) the addition and role of governmental representative in the casino concessionaries.

Although the prices of some Macau casino stocks dropped soon after the publication of this document, those stakeholders with vested interest might not fully understand that the consultative document’s proposed amendments are accurately plugging the loopholes of casino and gaming governance in Macau. Arguably, there is and will be a genuine need for the government representative to oversee each casino concessionary’s operation, perhaps through the government’s appointment of its representative into the Board of Directors with the direct say on the most crucial issue, notably profit sharing which in the past was criticized as siphoning off the tremendous profits away from Macau to overseas. A careful study of the consultative document shows that governmental supervision and stricter control over casino governance is long overdue, ranging from the control over profit sharing to the supervision over casino-related crimes. The objectives are to modernize casino governance further and to shape its healthy development, with contributions back to the society of Macau and its economic diversification.

The Hengqin-Macau development is simultaneously accompanied by the Qianhai-Hong Kong integration. On September 6, the State Council published the Comprehensive Reform and Open Plan for Qianhai-Shenzhen-Hong Kong Modern Service Sector Cooperation Zone. The document states clearly that it aims at “enhancing Hong Kong comrades’ centrifugal force toward the motherland” and that it plays a “demonstrative and leading function” of deepening reforms in the Greater Bay Area. The plan outlines all the areas of rapid development: the service sector, monetary and financial development, high-tech development, artificial intelligence, smart cities, innovative experiments and research, the protection of civilian enterprises, the deepening of the reform of state-owned enterprises, the relaxation in allowing the people of Hong Kong, Macau and foreign countries to work and stay in Qian, the establishment of arbitration center and international law services center, and the expansion of international trade. One striking similarity of the Qianhai-Hong Kong plan and the Hengqin-Macau developmental blueprint is that both emphasize the importance of Party building and the improvement of the rule of law in the two zones – an indication that politics and law remain in command amid deepening and accelerated economic liberalization.

Unlike Hengqin which is reshaped to accommodate the needs of Macau, Shenzhen’s Qianhai is urged to accelerate and deepen its reforms by working with Hong Kong in all the strategic areas. Given that Hong Kong’s universities are strong in research, the integration between Qianhai and Hong Kong clearly taps the Hong Kong knowledge and research expertise to maximize the potentiality of further technological development in Shenzhen’s Qianhai.

First, if the Greater Bay Area plan is shaped, structured and developed in such a way as to incorporate Hong Kong and Macau, the Hengqin-Macau and Qianhai-Hong Kong integration will likely develop into a possible territorial merger in 2049 and 2047 respectively. The Hengqin-Macau Cooperation Zone has already delineated the timeline up to 2035. Hence, when both Macau and Hong Kong approach 2049 and 2047 respectively, it will be quite likely that the central government will have a new plan along the line of a possible territorial merger, relaxing the first line or even the second line of the special cooperative zones to be integrated into Macau and Hong Kong. In both Macau and Hong Kong, physical and geographical space remains limited. Hong Kong’s limited land supply would have a huge boost if Hengqin were territorially integrated into the special administrative region, especially if a plan is underway to build a railway connecting the New Territories with Hengqin.

Second, the central government’s blueprint of development for Macau and Hong Kong demonstrates a strong developmental state in Beijing, which may have Taiwan’s economic integration in its mind. In other words, if Taiwan is going to be economically lured and integrated back into mainland China in the future, the Greater Bay Area (GBA) with the special developmental roles of Hong Kong and Macau will play a collective demonstration model where special administrative regions can have special zones, and where Taiwan will be economically attracted to interact with the GBA in a more intensive way than the present. Of course, Beijing-Taipei relations are more complex and will depend on other factors, including Taiwan’s domestic political change and Beijing’s strategic calculations.

In conclusion, the Hengqin-Macau cooperation zone must be analyzed together with the Qianhai-Hong Kong cooperation zone in the context of using the “one country, two systems” to show its demonstrative economic liberalization impacts on Taiwan. Economic liberalization and reform deepening are the hallmarks of China’s development, especially in the Greater Bay Area where the Hengqin-Macau and Qianhai-Hong Kong cooperation zones have profound economic, social and political implications. Socio-economically, Macau’s economic diversification will be realized sooner or later, while Hong Kong’s strengths are fully maximized with a win-win situation of utilizing the vast physical space and technological expertise in Qianhai. The Chinese identity of the people of Hong Kong and Macau are expected to be strengthened with their increased centrifugal tendency toward their motherland. On the other hand, Hengqin is going to be developed into a more international city than ever, as with the case of Qianhai. Economic interdependence can be witnessed in the rapid and closer economic integration between Qianhai, Hong Kong, Hengqin and Macau. Approaching 2047 and 2049, it will be likely that the boundaries of Hong Kong and Macau respectively will be redrawn so that the two administrative regions will go deeper and integrate territorially with Qianhai and Hengqin respectively.