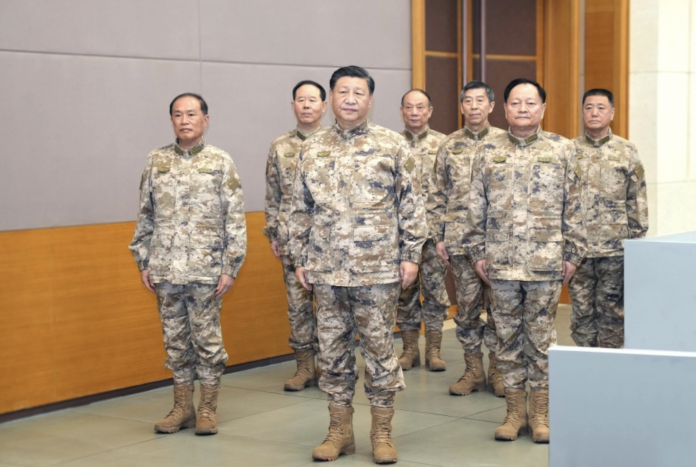 When China’s President Xi Jinping inspected the command center of the Central Military Commission (CMC), he used a new capacity and title of being “the central commander of the combined command of the CMC” – a move raising outside speculation of whether China is ready to use military force to defend its territorial interest and sovereignty, including Taiwan whose future belongs to an ongoing dispute between China and the United States.

A closer look at the new composition of the CMC since the end of the 20th Party Congress has revealed some new and existing members, whose background deserves attention.

The Communist Party of China (CPC) unveiled a list of seven CMC members on October 23, including the continuation of chairman Xi Jinping and the 72-year-old Zhang Youxia as the vice chair of the CMC. Zhang was a veteran of the 1979 Sino-Vietnamese war and he was promoted as a brigade commander. In April 1984, he was sent to the battle of Lao Shan during which the Vietnamese army launched a counteroffensive.

Zhang adopted a strategy of occupying the high points of the mountain, while leading his brigade 119 to capture the strategic strongholds of the Vietnamese military – a move reportedly shocking the Vietnamese high command. From June to July 1984, the Vietnamese army reorganized themselves and launched a massive attack on Zhang’s brigade, which was prepared well by dividing itself into strategic defensive points and which made counterattack whenever the Vietnamese army retreated.

His performance made him promoted to be a division commander after the war. Zhang was sent to defend the southwest border areas until 2005, when he was deployed to be the deputy commander in Beijing’s military zone. As a veteran adopting an aggressive tactic in the Sino-Vietnamese war, Zhang’s continuation as the deputy chair of the CMC reflects his impeccable military record.

Another deputy chair of the CMC is He Weidong, who is 65 years old and who was born in Fujian province. He had rich experience in being the chief of staff of the 31st Army which was stationed in Fujian – showing his military planning in dealing with the Taiwan Strait. He was later deployed to the military regions of Nanjing, Jiangsu, Shanghai and the West and the Eastern regions. In 2019, He at the age of sixty-three was reaching his retirement era, but then in March 2022 he was deployed to the People’s Armed Police under the People’s Liberation Army (PLA).

In September 2022, he worked in the CMC’s combined command center – an obvious promotion to the top CMC’s commanding position. As such, his promotion as the vice chair of the CMC during the 20th Party Congress in October was by no means surprising, given his rich experiences in Fujian and other regions, especially as he played a key role in the August PLA military drills surrounding Taiwan shortly after the provocative visit by Nancy Pelosi to Taipei. Some Taiwan-based observers of the PLA believed that He Weidong’s appointment as the CMC vice chair implied that the CMC chair Xi Jinping might really hope to use military force to deal with the mainland’s reunification with Taiwan. Moreover, it is speculated that He Weidong might be one of the members of the CPC’s leading small group on Taiwan.

Central Military Commission of the CPC

Apart from He Weidong who has strong Fujian background and training, Miao Hua was another new CMC member who was born in Fujian. Miao graduated from the Defense University and specialized in management and engineering, while focusing on the political work of the PLA in Nanjing and Lanzhou military regions later. What was important about Miao Hua was that he became an Admiral of the Chinese navy in July 2015. His appointment to the CMC can be seen as a result of combining his political work with military expertise as the Admiral, apart from his background from Fujian province.

A new member of the CMC is 64-year-old Li Shangfu, who was born in Sichuan and who has rich experiences in strategic and logistical supplies as well as space engineering and mission. From 1982 to 2012, Li worked in the Xichang Satellite Launch Center until 2013 when he was redeployed to Jiuquan Satellite Launch Center as a chief of staff. In January 2016, Li was sent to lead the newly established strategic the logistic force under the PLA. In October 2022, he was the first military chief from the logistical supplies background to be appointed to the CMC. The media speculated that Li would likely take over from Wei Fenghe to be the next defense minister. Li’s cooptation into the CMC as a new member in October 2022 was significant: his knowledge and expertise in the logistical supplies and space mission meant that China is preparing for any advanced military conflicts in the future.

It is noteworthy that under the current defense minister Wei Fenghe, China has been conducting military diplomacy. In June 2022, Wei said in the Shangri-la Dialogue that China is opposed to hegemonism, hegemonic power, separatism and confrontation, and that China supports peace and multilateralism. Wei also stressed after the August visit by Nancy Pelosi to Taipei that “Taiwan belongs to China,” and that “the Taiwan question is China’s internal affair.” It can be anticipated that Wei’s successor would likely continue to harp on the same themes of China’s opposition to hegemonism and its insistence to resolve the Taiwan question by the Chinese themselves.

Another younger member of the Party CMC is 58-year-old Liu Zhenli, who was born in Hebei and who resisted the Vietnamese army’s attacks in the battle of Lao Shan in 1984. Liu worked in the artillery force and later became a chief of staff of the Beijing military region, the PAP and the PLA’s army force. During the massive explosion of the Tianjin port in 2015, Liu was sent to deal with the fire and rescue – an indication that he had rich experiences in coping with crises. In July 2021, he was promoted as an Admiral. His appointment to the CMC in October 2022 can be regarded as a move to strengthen the top leadership’s artillery and planning expertise.

Finally, a continuing member of the CMC is the 64-year-old Zhang Shengmin, who was born in Shaanxi and who had rich experiences in dealing with military discipline. Zhang had a strong background as a political commissar from 2004 to 2016. In January 2017 he became not only the secretary of the Discipline Inspection Committee within the PLA but also a member of the CMC. His continuation as a CMC member in the 20th Party Congress in October 2022 means that Xi Jinping, who emphasizes clean governance in the CPC and the PLA, attaches great importance to the work of the Discipline Inspection Committee within the Chinese military.

Overall, the line-up of the Central Military Committee immediately after the 20th Party Congress has several prominent features. First, the members’ expertise is wide and covering the areas of real battle experiences in the Sino-Vietnamese war, artillery force, space mission, logistical supplies, strategic planning, political work, loyalty to the ruling party, anti-corruption and discipline, and the important province of Fujian which is closest to Taiwan. CPC General Secretary Xi Jinping emphasized in his report to the 20th Party Congress that China has to maintain its strong and modern military. As such, his recent emphasis on the PLA’s military preparedness is not only unsurprising but also a continuation of his stress on the necessity of the strong military as the most reliable support for the CPC longevity, China’s protection of its sovereignty and territorial integrity, its persistence in the Chinese renaissance, and most importantly the settlement of the Taiwan issue by force if the peaceful solution to deal with Taiwan’s political future is exhausted. In short, the new CMC composition is a mirror of how CPC may deal with the question of Taiwan’s political future.

December 8, 2022
It's quite unusual for an offbeat dish to gain popularity on a national level, let...

December 8, 2022
One of the bombmakers in the Bali blasts that killed more than 200 people two...
Load more