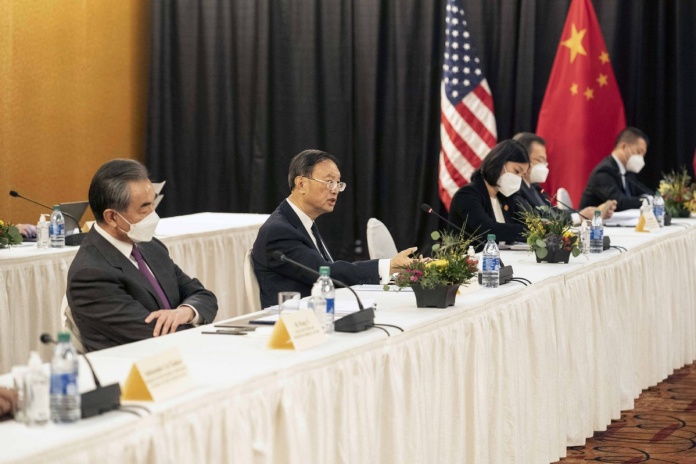 Recent events, including the US-China encounters in Alaska and the Chinese President Xi Jinping’s remarks in Fujian, have shown the economic pragmatism of the People’s Republic of China (PRC) and the Chinese political posturing to US and Taiwan in the era of civilizational clashes.

The most diplomatically explosive encounter between the PRC government and the new Joe Biden administration took place in Alaska on March 18, when the US Secretary of State Anthony Blinken told the PRC State Councilor Yang Jiechi openly that the US was unhappy with not only how China dealt with Xinjiang, Hong Kong and Taiwan, but also the Chinese “cyber-attacks” on the US and “economic coercion” toward US allies. Blinken’s provocative open remarks, together with the US sanctions on Chinese officials handling Hong Kong just a day before Yang Jiechi’s arrival at Alaska, were apparently regarded by the PRC delegation as an “hegemonic move.” In response, Yang gave a 15-minute speech criticizing the US “hegemony” and “democracy” and emphasizing that Chinese democracy must be different from the West.

To the Chinese delegates, Blinken’s remarks which mixed Xinjiang and Hong Kong with Taiwan were already politically unacceptable. Xinjiang and Hong Kong are regarded by the PRC as its internal matters outside the influence of foreign states. But the US perceives Xinjiang and Hong Kong’s developments as impinging on the values of freedom and democracy cherished by the Americans. In response to the US values, Yang asserted that China has its own style of democracy different from the West. When Yang maintained that China has its freedom and democracy, and when Blinken revealed that the US allies like Japan and South Korea share the American worries about China, it was crystal clear that the Asia Pacific region is now deeply politically divided by two blocs, namely the US-led allies and PRC-style regimes.

Compounding the profound ideological and civilizational differences between China and the US was the meeting of Quad on March 12, when the first leaders of four nations – the US, Japan, India and Australia – attended a summit with pledges to work together on the Covid-19 vaccines, supply chains and technological development. From the Chinese perspective, the Quad summit appeared to be a US-led alliance to contain China, even though the issues discussed in the summit avoided giving an outside impression that it aimed at containing the PRC’s rise. The tense relations between China and India over their border, and between China and Australia over trade issues, have already made the Quad summit politically sensitive. The Chinese People’s Liberation Army conducted combat drills in the Yellow Sea, East China Sea and South China Sea at a time when the heads of governments of Quad held their first summit. Clearly, the Chinese made political posturing in response to the actions of US-led allies in Asia.

Some American commentators believed that Yang’s immediate and long response to Blinken’s remarks were targeted at China’s domestic audience. However, such assessment failed to understand the Chinese elite political culture. Yang’s comments appeared to be fully psychologically prepared for not just showing the PRC’s tough stance in front of the domestic Chinese audience, but arguably more in demonstrating to the developing states that China dares to confront the US in terms of ideological values and differences. Many developing states have supported China ideologically and refrained from interfering with its internal matters. For instance, they supported the enactment of the national security law in Hong Kong shortly after late June 2020. The PRC political culture, as the late political scientist Lucian Pye said, attaches importance to the concept of face (mianzi). Blinken’s opening remarks appeared to ignore the Chinese face and the resulting long and tough response from Yang was arguably natural.

While most Western and Asian media focused on the explosive one hour and 15 minutes exchanges between the Chinese delegation and the US side in Alaska, a more sober analysis of the meeting could show that both the Chinese and American delegations did sit down to talk about other practical issues, such as climate change and their governmental cooperation in dealing with Covid-19.

Interestingly, just five days after the Alaska meeting, Chinese Foreign Minister Wang Yi, who was one key member of the PRC delegation to Alaska, met Russian Foreign Minister Sergey Lavrov in the Guangxi Zhuang Autonomous Region. Both affirmed the need for China and Russia to consolidate high-level exchanges, to renew the China-Russia Treaty of Good-neighborliness and Friendly Cooperation, to discuss mutual recognition of health codes, and to promote cooperation in such areas as trade, 5G, big data, green economy, climate change, and environmental protection. Wang raised the issue of “rules-based international order,” which to the PRC side “reflects the rules of a few countries and does not represent the will of the international community.” Wang’s remarks were directed at Blinken’s comment on the need for China to respect the “”rules-based international order.” Clearly, Sino-US ideological differences could be found in the Wang-Lavrov meeting.

Lavrov emphasized that Russia and China should deepen coordination and collaboration in multilateral institutions, such as the United Nations, Shanghai Cooperation Organization, BRICS and APEC, and that the two sides should oppose external forces’ interference by utilizing social networks in the domestic affairs of the two countries. Lavrov implied that Western states utilized non-governmental organizations to foster political changes in other countries – an implicit criticism of “color revolution” backed up by the West. In fact, China remains highly vigilant of the likelihood of “color revolution,” as with the case of Hong Kong in 2019 when the anti-extradition movement was perceived by Beijing as the action of local protestors to “collude” with foreign states to “subvert” the Hong Kong and mainland Chinese regimes.

Due to serious clashes of ideological values in the world, Asia is deeply affected by the threat of an emerging new Cold War. On March 19, North Korea cut its diplomatic relations with Malaysia in retaliation of the latter’s move to extradite a North Korean to the US on charges of laundering money and violating the UN sanctions by supplying prohibited items to North Korea through Malaysia. On March 25, North Korea launched a new type of tactical guided projectile which could reach 600 km (373 miles) off its east coast and into the Sea of Japan. The new missile could carry a payload of 2.5 tons, which would make it possible to be equipped with a nuclear warhead. The Biden administration said the missile launch violated the UN resolution. The Japanese government strongly protested the North Korean missile launch. Since 2011, North Korea reportedly launched more than 100 missiles and conducted four nuclear weapons tests. Given the perceived rising Chinese military threat and North Korean missiles menace, it is not surprising that Japan has been rearming itself militarily and rapidly in recent years.

Despite the looming new Cold War atmosphere in Asia, China has been maintaining its economic pragmatism. On March 25, the PRC Ministry of Commerce remarked that China had completed the ratification of the Regional Comprehensive Economic Partnership (RCEP) agreement. The ratification showed China’s determination to push forward the trade deal, which needs at least nine of the fifteen member countries’ endorsement. From the Chinese perspective, Japan’s ratification of the deal will be significant In November 2020, China and Japan reached an agreement on how to reduce bilateral tariff – a breakthrough in their economic relations. The proportion of Japanese products that the PRC will exempt tariffs is set to increase from eight percent to 86 percent, whereas Japan’s duty-free ration for PRC products will reach the same level. On March 25, the PRC Ministry of Commerce announced that China is fully prepared for the implementation of RCEP agreement, including 613 legally binding stipulations. If RCEP were enforced, 30 percent of the PRC exports would have the privilege of having zero tariffs. In terms of trade expansion, China is eager to get the RCEP implementation as soon as possible.

If economic pragmatism prevails in the Chinese diplomatic mentality, then political pragmatism can also be seen in the remarks made by President Xi Jinping in his four-day visit to Fujian from March 22 to 26. He inspected a cultural park commemorating poet Zhu Xi, adding that civilization is the soul of a country and nation. Moreover, the realization of the Chinese dream must be confident in the Chinese path of socialism, which has been built upon the 5,000 years of civilization.

The most important remark of President Xi was directed at how mainland China is dealing with Taiwan. He said that Fujian should emphasize open human interactions, special privileges and emotional ties to promote its integration with Taiwan, and that one can “explore the new path of cross-strait integration and development.” As Fujian is geographically near Taiwan, President Xi’s remarks can be seen as a pragmatic political gesture to the Taiwan comrades, extending the PRC’s warm hands to the Taiwan side through the exploration of how both sides can and will foster economic, cultural and human interactions.

In conclusion, China and its political leaders have been emphasizing the importance of economic, political and cultural pragmatism amid the increasingly diverging ideological and civilizational clashes between China and the US-led allies. The curious combinations of the open disputes during the Sino-US talks in Alaska, the Sino-Russian meeting shortly afterwards, the Chinese emphasis on the economic benefits of RCEP implementation, and most importantly, President Xi’s emphasis on the exploration of a new integration and developmental path for mainland China and Taiwan, can be seen as the evidence of merging Chinese pragmatism with political posturing to the US and Taiwan in the ideological and civilizational conflicts between China and the West.

August 16, 2022
The United Nations on Monday implored the world to not forget the plight of Afghanistan's...
Load more