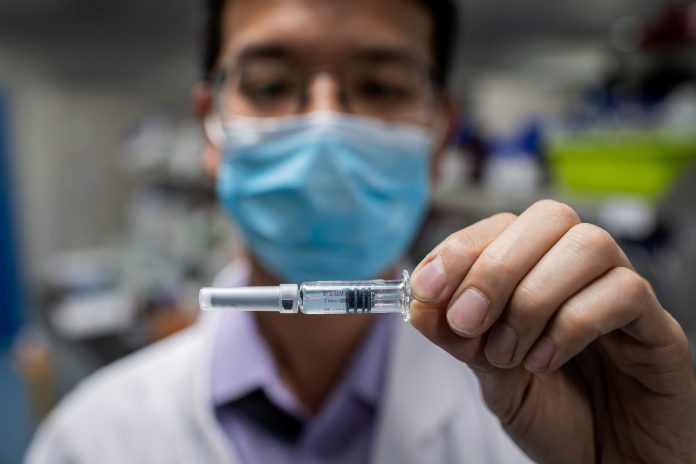 Since the outbreak of Covid-19 in early 2020, the People’s Republic of China (PRC) has made strenuous efforts at producing vaccines and making them as, according to President Xi Jinping, “public goods” that can and will help other countries in the world in the joint containment of the deadly infectious and gradually mutated disease.

In December 2020, while the Western media tended to focus on the production and progress of Pfizer’s vaccine, some countries in Asia and Middle East were interested in the vaccines produced by China. In mid-December, The Turkish Foreign Minister Mevlut Cavusoglu told the PRC counterpart Wang Yi over a phone call that Tukey would like to urgently purchase the Chinese vaccines. Cavusoglu’s remarks were made after the Turkish Health Department’s agreement reached with the Chinese company Sinovac to buy 50 million doses of the Covid-19 vaccine. Considering the mutating nature of Covid-19 and the aggravating situation in Europe and the US, the Turkish move naturally aimed at protecting Turkey’s citizens immediately. About 13,000 volunteers in Turkey participated in Sinovac’s Phase Three clinical trials.

In late 2020, other countries such as Indonesia, Brazil and Chile decided to purchase the Sinovac vaccine. In December, Indonesia received the first shipment of 1.2 million doses of Chinese vaccine. The United Arab Emirates (UAE) approved the purchase of another vaccine produced by the China National Biotec Group (CNBG) under the China National Pharmaceutical Group (Sinopharm). At the same time, Hungary considered the Chinese vaccines apart from its procurement from Europe and Russia because of the perceived inadequacy of inoculating its 10 million population.

As some of the Chinese vaccines made a breakthrough in international recognition, they are undergoing mass production for domestic use. Sinopharm Holdings has tested the capacity, capability, distribution and transportation of vaccines, and it will also oversee the nationwide distribution of two inactivated vaccines.

According to Global Times, China started earlier in the research and production of vaccines but lagged behind other Western countries in phase three trials – a phenomenon due to three factors, namely the short-term easing of Covid-19 in the fall of 2020, the emergence of communication gaps, and the inexperience of Chinese companies in their international cooperation. Nevertheless, the outbreak of Covid-19 and the desire of all countries in the world to contain it provided a golden opportunity for the Chinese vaccine companies to reach out to the international market.

In early December 2020, the inactivated vaccine of Sinopharm reportedly had an efficacy rate of 86 percent based on an interim analysis of phase three clinical trials in UAE. In late December, the local government of Sao Paulo said that CoronaVac – a vaccine produced by Sinovac – was over 50 percent effective. There is a partnership between the Sao Paulo-based Butantan Institute and the PRC pharmaceutical company Sinovac.

Although Pfizer has an efficacy rate of reportedly 95 percent, its mRNA vaccine needs to be kept at minus 70 degrees Celsius in the processes of transportation and storage. As such, Global Timescommented that “this is a vaccine designed for rich countries, rather than for developing countries.” Moreover, there were cases of “severe allergic reactions,” according to Global Times.

In contrast, the Chinese vaccines, such as Sinovac’s inactivated Covid-19 vaccine, can be stored at a standard refrigerator and is much cheaper and more suitable for many developing countries.

In fact, the UEA has become the first country in the world offering the Chinese-developed Covid-19 vaccines to its citizens freely.  The inactivated vaccine produced by Sinopharm was registered in the UAE in early December 2020, and it was donated by the UEA government to Egypt and Seychelles – a sign of diplomatic successes on the part of China’s vaccines.

In the same month, the Center for Drug Evaluation of the PRC’s National Medical Products Administration formally accepted the application of Sinopharm vaccine for market use in January 2021.

Some areas in the PRC, including Zhuhai in Guangdong province, and Yiwu, Jiaxing and Shaoxing in Zhejiang province, have authorized the emergency use of vaccines inoculation for high-risk groups. However, some mainland residents prefer to wait for a while until the time when the vaccines are formally approved. Sinopharm’s vaccines require two doses.

In late December 2020, the PRC government and the Egyptian counterpart signed a letter of intent to cooperate on the research, development, production and use of Covid-19 vaccines between the two countries – another triumph of Chinese vaccine diplomacy. On December 10, Egypt had already received the first batch of a Chinese vaccine from UAE to combat Covid-19.

In early January 2021, an executive at the China National Biotec Group (CNBG) told the PRC media that a Sinopharm vaccine showed 79.34 percent efficacy rate based on an interim analysis of a last-stage clinical test in China. Although this rate was lower than the 86 percent efficacy reported in UAE on December 9, both data were “real” because two places had different standards and procedures in diagnosing patients and assessing the efficacy rate.

Starting from January 2021, many mainland cities have initiated massive Covid-19 vaccinations, especially in view of the forthcoming holiday travel season in mid-February. The state objective is to vaccinate 50 million Chinese ahead of the 2021 Spring festival holidays.

There are currently nine key groups of people receiving vaccination first, including inspection workers at customs coping with cold-chain products, porters at entry ports, the workers in the domestic and international transportation industries, those people who travel abroad for work or personal reasons, medical workers, government employees, and people who are aged between 18 and 59.

On January 4, 2021, when Foreign Ministry spokeswoman Hua Chunying was asked by a CCTV reporter on the distribution of Sinovac vaccines to Indonesia’s 34 provinces and to Egypt, she replied that the PRC government supports Chinese companies’ cooperation with other foreign countries in the research and production of vaccines. Moreover, “China will firmly fulfill its commitment on ensuring the accessibility and affordability of vaccines in developing countries as a global public good after China’s Covid-19 vaccines are ready for deployment.”

In response to the question on the safety of the Chinese vaccines, Hua remarked: “The Chinese government always puts vaccine’s safety and efficacy in the first place, and Chinese companies have been developing vaccines in strict accordance with laws and regulations, following scientific laws and regulatory requirements.” She also added that the visit of Foreign Minister Wang Yi to African countries in January 2021 would aim at strengthening “solidarity against Covid-19.”

On January 2, 2021, Wang Yi reiterated that China cooperates with African countries in the joint fight against Covid-19, building on the previous consensus reached between the PRC and African states in the Extraordinary China-Africa Summit on Solidarity Against Covid-19 that had been held through a video conference in mid-June 2020.

President Xi Jinping chaired the video conference and appealed to the African states to “stay committed to fighting Covid-19 together.” He added: “We must always put out people and their lives front and center. We must mobilize necessary resources, stick together in collaboration, and do whatever it takes to protect people’s lives and health and minimize the fallout of Covid-19.”

To conduct vaccine diplomacy in which Chinese-made vaccines must be transported safely to various countries, the PRC’s aviation industry has been making intensive preparations. The China Southern Air Logistics has been working with domestic vaccine producers to prepare transporting many vaccines overseas. China southern has 850 aircrafts, including 14 Boeing 777 cargoes aircrafts in which each cargo plane can carry 100 tons of cargoes. In late November, a vaccine charter flight was used by China Southern Air Logistics to transport Sinovac vaccines to Istanbul. The aircraft had to be equipped with temperature-controlled container as the Chinese vaccines needed to be kept at temperatures between 2 and 8 degrees Celsius.

Airports in Beijing, Shanghai and Shenzhen are also prepared for the large-scale transportation of vaccines overseas in the implementation of China’s vaccine diplomacy. Apart from cold-chain drug management process that must be tackled, the logistics and supply chain include refrigerated warehouses for vaccines storage and cold-storage transfer vehicles. The entire logistics ecosystem must be adjusted and updated to ensure the smooth implementation of the PRC’s vaccine diplomacy.

The World Health Organization, according to reports, is reviewing Chinese vaccines for possible emergency listing. If any Chinese vaccine were approved, it would boost the confidence of more developing and Western countries in the Chinese-made Covid-19 vaccines.

On January 9, it is reported in Hong Kong that Brazil’s phase three clinical trials of Sinovac shows an overall efficacy rate of 78 percent, a performance that, according to a medical adviser to the Hong Kong government, is “quite satisfactory.”

In short, while the production of the Chinese vaccines has been accelerated and their clinical trials are proceeding rapidly, China’s vaccine diplomacy has gained some significant breakthrough amid the global search for vaccines against Covid-19 and the increasing international recognition of the efficacy of Chinese-made vaccines.

April 13, 2021
The World Food Programme said Tuesday it needed US$82 million to provide life-saving assistance to...

April 13, 2021
China's women sealed a last-ditch spot at the Tokyo Olympics football Tuesday by squeezing past...