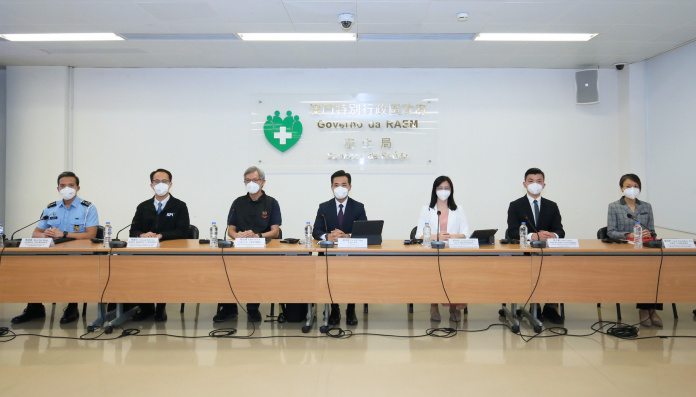 Since the start of the pandemic I would wager with anyone interested that I would likely have the dubious honour of being the person that watched more pandemic update press conferences by Macau health officials on the globe, possibly beyond.

It has been a journey since the first-ever confirmed case was announced on January 22, 2020 to the now worst ever community outbreak in the city, with almost 800 confirmed cases in two weeks.

I’ve seen ‘heated exchanges’, if you can really call them that, during these two years and a half on these press conferences but for the most part health officials have maintained a sense of composure and patience with the questions posed.

This is the part of the article where I start with the usual preamble one has to do in such instances namely: I respect the effort and sacrifice of the many health workers and staff during the pandemic, their dedication and zeal in making sure the SAR remains one of the only regions on the world without any fatalities from Covid-19.

In fact, I think we should have a special song dedicated to health staff. Now that I think about it, it actually was actually already created and went on heavy rotation on TDM TV!

Now that we’ve done away with the pleasantries we can get down to brass tack, as this opinion piece is not about health bureau staff but the communication strategy of their officials.

In the months before the current outbreak – as in many instances when the pandemic front was relatively quiet – there have been multiple occasions when the information provided during the usual weekly 5:00 pm press conferences has been barely useful.

After all reading, the same endless stream of asymptomatic cases and border crossings hardly makes for good TV.

In some instances, health officials would also only reveal very consequential announcements after 15 minutes of reading the same statistics we have all become accustomed to.

I remember them doing so when it was announced entry quarantines for overseas arrivals would be reduced for the first time in almost 2 years after I had barely escaped falling asleep after hearing of tourists in quarantine hotels.

Journalists are now bombarded daily with information from all sides from government departments, with consequential announcements issued in the early hours or lacking detail.

Still, I get it. It’s a dynamic situation and changes and policies are made on the fly. However, the daily pandemic press conferences by the Novel Coronavirus Response and Coordination Centre are supposed to be the forum where such questions of great importance to the public can be clarified.

Residents are on edge after 10 days of repeated testing rounds, our noses sparkling from multiple swabs, and repeated disruptions to their daily lives. Since they don’t really have channels to vent their distress to authorities they bombard media outlets for answers to be provided by health officials.

Health Bureau Director Alvis Lo should enjoy these press conferences more, after all, he can partly attribute his current position to the prominence they gave him to the general public.

I’m sure he is a busy man, but when he chooses to not show up after the scenes of chaos we saw on Thursday after thousands of workers gathered in testing centres, then people will question his absence.

Especially, after the previous day, he spent a great deal of the press event questioning the validity or usefulness of some reporters’ questions.

I myself don’t agree with some questions posed sometimes, especially if they follow a certain tendency by residents of blaming or shaming people who contract the virus as if it was their fault.

For a while, one of the main topics being raised pertained to a wedding at the Grand Lisboa Palace, in which four people were later found to be positive.

For days and days the questions revolved around the guest list and what important people were at a wedding organised before any of the current pandemic restrictions were even in force.

Still, reporters have the right to ask the questions they want and officials are there to try and respond to them to the best of their ability, not make judgments on the validity of these questions.

Also, most of the time if reporters make repeated questions it will likely be if the answers don’t really answer what they asked. Which I must say, happens many times.

In the last weeks, we have had many policies involving the Gaming Inspection and Co-ordination Bureau (DICJ) and pandemic guidelines issued to gaming operators and employees that are not even publically disclosed.

Since no DICJ representatives are usually present in the pandemic press conferences, reporters can only resort to asking Health Bureau officials, which seemingly never seem to know many details about these guidelines.

These are challenging times for everybody involved – aside from nucleic acid test manufacturers – and everyone is on edge.

At one point in one of the press conferences last week a Health Bureau communication staff even took a microphone from a TDM TV reporter before she could even finish the question, an incident that prompted the Macau Journalists Association to issue a strong statement.

Everyone involved should in the pandemic press conferences take a breather and get back to some civility while remembering the main reason we even have them: to inform the public.

Health officials are busy and don’t want to spend one hour and a half answering questions. However, if they want not to spend so much time there they just need to make sure most public doubts are clarified in an efficient way.

December 7, 2022
Macau’s gross domestic product will not rebound to where it was before the Covid-19 pandemic...
Load more