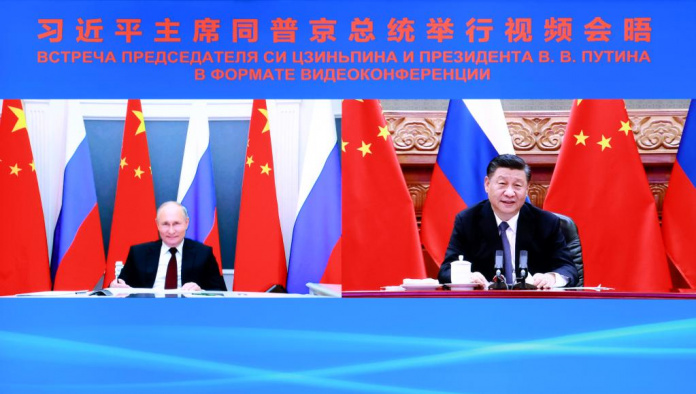 The video meeting between the Chinese President Xi Jinping and the Russian Vladimir Putin on December 12 reached a consensus on six main areas of cooperation amid a political climate of deteriorating relations with the United States. At the same time, a shadow of mini-Cold War between Russia and the United States has emerged mainly because of their strategic and military calculations over Ukraine.

The video meeting between President Xi and President Putin was politically significant. First and foremost, President Xi emphasized that some countries waved the flag of “democracy” and “human rights” to intervene in the internal affairs of both China and Russia and that both China and Russia should take joint action to protect their safety. President Putin’s position was that the Sino-Russian relations have reached “an unprecedentedly best period” in which both sides establish mutual trust strategically based on maintaining the principles of mutual respect and non-interference in other’s internal matters.

Obviously, both sides disagree with the way in which some Western democratic states use their democratic values to criticize China and Russia. Ideologically, the Sino-Russian neighborly friendship and cooperation treaty has been signed for 20 years and is extended further. Both countries, as Putin said, are eager to tackle the spread of Covid-19, maintain trade relations, strengthen technological cooperation and seek to retain international peace.

The ideological affinity of China and Russia is consolidated at a time when Sino-US relations and Russo-US relations are simultaneously strained. The US trade protectionism against China and its ideological criticisms of China’s domestic developments, including Xinjiang and Hong Kong, have raised the eyebrows of the Beijing leadership.

Second, President Xi delineated six areas of deeper cooperation with Russia: (1) the joint combat against the spread of Covid-19, including mutual cooperation in the testing of vaccines against the variants of Covid-19 and cross-border measures against the spread of the disease; (2) industrial cooperation in the areas of energy supply, technological development and the production of renewable energy; (3) the promotion of global sustainable development from now to 2030, including the development of new markets and the assistance provided to the developing states; (3) the strengthening of regional cooperation, notably the consolidation of the Shanghai Cooperation Organization (SCO) and its spirit, especially the need to strengthen collective security without allowing foreign forces from interfering with the internal affairs of SCO states; (4) the enhancement of BRICS (Brazil, Russia, India, China, South Africa) and its multilateralism and open economy as well as public health cooperation; and (5) the strengthening of the UN Security Council to fight Covid-19 and maintain world peace.

These six areas of cooperation have important implications for Sino-Russian relations. Both sides regard the combat against Covid-19 as high in their cooperative agenda. The question of energy supplies comes the second one, followed by sustainable development in winning the hearts and minds of other developing states. Most importantly, the idea of consolidating the collective security of SCO has the implication of fending of any foreign intervention, while the closer cooperation of countries in BRICS and Security Council means that the Sino-Russian coalition is increasingly politically an ideologically stronger than ever before.

In response to Xi’s proposed six areas of cooperation, Putin’s reaction was warm and positive, affirming the importance of collaboration in these areas while adding that Russia resolutely supports the position of the People’s Republic of China (PRC) on the question of Taiwan.

The closer Russian relations with China comes at a time when the Russo-US relations are deteriorating rapidly over the question of Ukraine. In early December, it was reported that the US intelligence found Russia gathering 175,000 troop along the border of Ukraine, and that Russia would perhaps “invade” Ukraine which was drifting politically toward the Western allies.

On December 18, Russia said it wanted to have a legally binding agreement that the North Atlantic Treaty Organization (NATO) would give up military build-up in Eastern European states, including Ukraine. The Russian demands embrace Moscow’s veto over any future NATO membership for Ukraine – a demand that the Western states have already rejected. Even the Ukrainian government has added that Ukraine has an “exclusive sovereign right” to determine its relations with NATO.

Under these circumstances, Ukraine has to be a more “neutral” buffer state in the eyes of Russia, but it has become a target of military assistance, if not “expansion,” in the mind of the United States. The relatively tense relations between Russia and the United States over the question of Ukraine remain to be unfolded and solved.

On the other hand, Russia and China have constituted a military threat to Japan, from the perspective of the Japanese strategic thinkers. In July 2021, a visit by the Russian Prime Minister Mikhail Mishustin to the Kurile Islands, whose sovereignty remains contested between Russia and Japan, raised the eyebrows of the Japanese government. On October 19, ten Russian and Chinese warships sailed through the Tsugaru Strait, which is a narrow sea passage separating Hokkaido and Honshu. The increasing strength of the People’s Liberation Army (PLA) in recent years has also been seen by Tokyo as a military threat. The perceptions of military threat have made the triangular relations between Russia, China and Japan more complex than ever before.

A recent remark made by the former Japanese Prime Minister Shinzo Abe that any “adventure” made by the PLA on Taiwan would lead to “a crisis for the US-Japan alliance” prompted an immediate response from the Chinese Foreign Ministry, which summoned the Japanese ambassador Hideo Tarumi by saying that Abe’s comments were “extremely wrong.” It was reported that Assistant Foreign Minister Hua Chunying reminded the Japanese ambassador of the previous Japanese military aggression against China.

Clearly, the perceptions of military threats have been compounded by political distrusts that stemmed from the historical legacies in Sino-Japanese relations. On the other hand, the increasingly closer military relations between Japan and the United States have also been seen by China and Russia as a real military threat.

The territorial dispute between Japan and China over the Diaoyu Island (Senkaku Island in Japanese) remains a tricky issue to be handled by both sides. Fortunately, both China and Japan have been handling the island in a more skillful and low-key manner, like dispatching coast guard vessels to patrol along the waters near the island rather than deploying military warships too close to the disputed island.

Still, Japan’s recent stronger position on Taiwan, either from the government’s stance or from the parliamentarians’ remarks, in the midst of the increasingly tense relations between Beijing and Taipei has made the PRC authorities quite uncomfortable.

Objectively speaking, the question of the future of Taiwan has been exaggerated by quite a lot of American observers, including military analysts, who have harped on the same theme that the PLA “invasion” of the island republic would be soon and imminent. Nevertheless, such assessment is usually based on highly subjective and speculative ideas rather than concrete evidence. The PLA’s increasing military strength is one thing, but it is another matter of its “imminent invasion” into Taiwan. Perhaps some American analysts have deliberately exaggerated the PLA threat as a psychological ploy of having a “deterrence” impact on the PRC action.

The assessment of the “imminent” PLA “invasion” into Taiwan has consistently neglected the fact that Beijing’s position on Taipei has remained unchanged. On the one hand, President Xi has mentioned that Chinese would not fight against the Chinese, but on the other hand, China does not renounce the use of force to deal with Taiwan if the “separatist” elements there run out of control.

Given that Russia has cordial relations with both India and China, it can and will play a crucial mediating role in case of any severe tensions between India and China. However, on the other hand, India has been relying on Russian military weapons to deter the Chinese military “threat.”