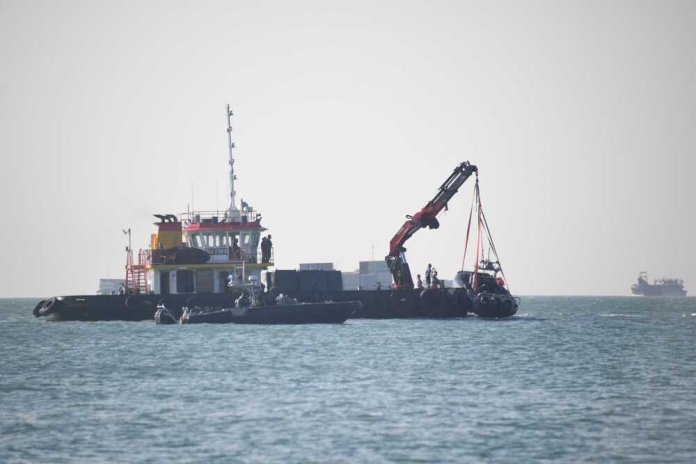 The tragic death of a senior inspector, Lam Yuen-yee, who died after a Hong Kong police vessel was crashed by a turbocharged speedboat on September 25, triggered an immediate cross-border marine police cooperation between Hong Kong and the mainland against a new style of smuggling syndicates amid the persistence of Covid-19.

The continuation of Covid-19 has been undermining the business of criminal organizations in Hong Kong and deterring some ordinary people from visiting saunas and nightclubs. Direct land transportation between Hong Kong and the mainland has also been hindered to a limited extent, reducing the chances of cross-border smuggling activities. As a result, criminal elements have been turning their covetous eyes on maritime smuggling, whose operations are not only of large scale but also entailing “one dragon service” that includes the establishment of “marine hotel boats” for smugglers and the technological advancement of using drones and surveillance cameras to detect police crackdown on their hidden warehouses located at the remote areas of the New Territories.

The death of Lam Yuen-yee on the waters off Sha Chau was only a tip of the iceberg in illustrating the severity of cross-border maritime smuggling between Hong Kong and the mainland. In response to the Lam incident, the Hong Kong Police Commissioner, Raymond Siu, led a delegation to Shenzhen and discussed cross-border police cooperation with the Guangdong vice-governor and public security chief Wang Zhizhong and the Guangdong marine police head Liu Shaogen. Both sides agreed to collaborate closely in the three areas of strategy, tactics and operation, while simultaneously elevating the standard of protecting the security of law-enforcement officers, improving their equipment, exchanging their training and experiences, and enhancing the operational efficiency. They also agreed to increase the frequency of joint combat against cross-border criminal and smuggling syndicates, which involve not only the Hong Kong triads but also mainland counterparts (Wen Wei Po, October 6, 2021).

In response to the death of Lam and the reports from the Hong Kong media that smuggling syndicated deployed hundreds of speedboats to pick up tons of smuggled products from various barges in the waters, the Hong Kong police took swift action. First, the police conducted a series of raids mobilizing 6,364 law-enforcement officers to arrest 131 people among which 23 not only had triad background but were also involved in smuggling activities. From September 25 to 30, the Hong Kong police inspected all kinds of entertainment venues in the Hong Kong Special Administrative Region (HKSAR) for 437 times, arresting 108 people who were involved in triad-related activities (Oriental Daily, October 1, 2021). All these anti-crime operations were necessary to deter the criminal organizations from conducting open, illegal and smuggling activities at least in the short run.

On October 2, the marine police from Hong Kong and Guangdong conducted a joint maritime operation, arresting 145 people who were involved in the provision of “marine hotel boats” for the smugglers on the waters of the Pearl River Delta (Oriental Daily, October 3, 2021). These boats were used to receive the smuggled products from speedboats, provide accommodation for the maritime smugglers, and act as the transit points for the sea smuggling routes. The marine police from the two sides confiscated 19 “marine hotel boats” and 5 speedboats. On the “marine hotel boats,” there were beds and water tanks provided for smugglers. The Hong Kong marine police also cooperated with the Macau counterparts to uncover and smash some “marine hotel boats,” squeezing the survival space of speedboats and smuggling syndicates and cleaning up the law-and-order situation on the waters of the Pearl River Delta.

As early as August 2021, the Guangdong marine police at Dongguan, Guangzhou and Shenzhen cooperated with the Jiangxi provincial police to arrest 15 criminal suspects, detain 7 vehicles and confiscate 102 bank cards that amounted to 230,000 yuan. These criminal elements were active in maritime smuggling activities and possessed 4 pistols and weapons that could be used in smuggling and piracy operations.

According to the statistics revealed by the Hong Kong customs, 52 cases of maritime smuggling operations (amounting to HK$480 million) were smashed from January to August 2021, compared with 55 cases (HK$160 million) in 2019 and 62 cases (HK$490 million) in 2020. Obviously, the number of cases went up considerably in the first eight months of 2021, demonstrating the criminal syndicates’ reliance on maritime smuggling activities. The timing of smuggling activities in mid-2021 was important; criminal organizations in Hong Kong and the mainland grasped the opportunity of the mid-Autumn Festival to smuggle all kinds of goods across the sea. On one single day alone, many speedboats were hiding under the Hong Kong-Macau-Zhuhai bridge, going out to the waters to receive the smuggled products unloaded from large barges. These speedboats gambled that the Hong Kong marine police did not have sufficient and powerful speedboats to catch them, especially as the smuggling speedboats were acting like “ants” moving their “food” in a large number (Oriental Daily, September 19, 2021).

It was reported that the Hong Kong police do not have enough high-powered and four motors-equipped speedboats to deal with hundreds of smuggling speedboats at the same time (Wen Wei Po, September 29, 2021, A3). On the waters off Tai O district, each speedboat could carry smuggled goods amounting to HK$1 million and most captains of these speedboats were mainlanders. Each mainland captain could receive 1,000 yuan per trip, and he could attempt five to six trips per day during the high time of maritime smuggling. In other words, each mainland captain could earn over 10,000 yuan every day if he was not caught by the mainland or Hong Kong marine police – a high incentive for them to take risks.

Some mainland smuggling syndicates used the Dachan Island in Shenzhen’s Nanshan district as a crucial transit base to receive the smuggled goods from the Hong Kong side (Wen Wei Po, October 3, 2021). The Dachan Island is the second largest outlying islands in Shenzhen. The Guangzhou marine police conducted risks assessment, seeing the island as a crucial smuggling site. From 2019 to 2021, the Guangzhou police smashed 1,300 cases of maritime smuggling. During the first eight months of 2021, they had already tackled 710 cases of maritime smuggling that amounted to 400 million yuan.

On the Hong Kong side, three main triads were reportedly involved in smuggling activities across the high seas (Wen Wei Po, September 29, 2021). As early as September 2020, a triad boss was reportedly a target of assassination by his rival gangsters within the same organization, because a negotiation between him and another ringleader broke down after he was found to use a container port in Tsuen Wan West for lucrative smuggling activities (Ta Kung Pao, October 7, 2021). Intra-organizational strife and power struggle could occur due to the territorial profits earned from the highly lucrative maritime smuggling.

The triad operation of cross-border smuggling, as the law-enforcement authorities in the HKSAR revealed on October 6, became far more elaborated and sophisticated than ever before (Ta Kung Pao, October 7, 2021). First, the smuggling syndicate daringly occupied a government site in the Ngau Au village in Tung Chung, Lantau Island, where they manufactured and repaired powerful speedboats for smuggling operations. In early October, the Hong Kong police cooperated with the Lands Department and the Government Flying Service to discover the smuggling base in Ngau Au village. The police found 39 high-powered speedboats and 8 outboard motors engine (Ta Kung Pao, October 7, 2021). All the speedboats were not registered with the Marine Department.

On October 7, the Hong Kong police discovered and smashed another smuggling syndicate that used Tuen Mun’s Lung Kwu Tan seaside as a smuggling spot, where HK$210 million worth of goods including shark fins, ginseng, bird nests, flower maw and Botox needles were found. The smuggling syndicate deployed surveillance cameras and drones to detect any police crackdown activities. It hid the license plate numbers of the vehicles used for smuggling, while utilizing chains and old vehicles to block the roads leading to the warehouse that stored precious goods for smuggling operation.

On October 6, Wen Wei Po editorialized that if Hong Kong’s integration with the Greater Bay Area (GBA) is inevitable, it is necessary for the Hong Kong police to cooperate more closely with their counterparts in the GBA cities, that a special task force should be set up with the GBA to combat smuggling activities, and that law and order and public interest will have to be fully protected in the process of integration (Wen Wei Po, October 6, 2021, A2).

In conclusion, the tragic death of inspector Lam Yuen-yee sparked the closer cooperation between the Hong Kong police and their mainland and Macau counterparts in the joint combat against cross-border smuggling activities and syndicates. Through intelligence-sharing activities and joint anti-smuggling operations, the maritime smuggling syndicates are temporarily curbed. Nevertheless, such cooperation will have to persist to prepare a more solid foundation for Hong Kong’s deeper and faster integration with the Greater Bay Area, especially once Covid-19 will hopefully fade away sooner or later. On the other hand, the increasing sophistication and the prominent proliferation in cross-border smuggling activities demonstrated how criminal elements grasped every opportunity to profit themselves lucratively. The cat-and-mouse game between the police and smugglers will likely be an enduring phenomenon in the South China region in the coming decades.