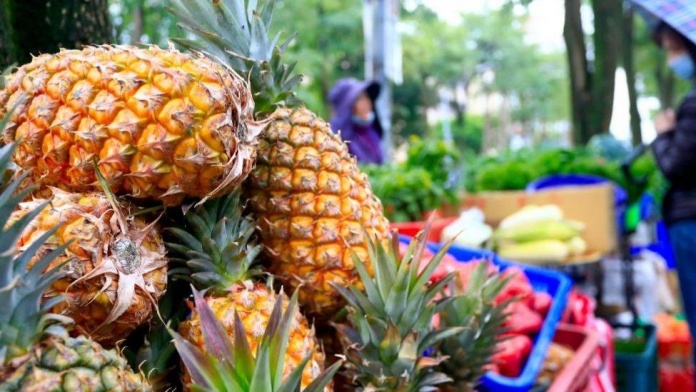 The termination of the import of Taiwan pineapples by the government of the People’s Republic of China (PRC) on March 1, 2021 on the grounds that they were infected with pests and the ensuing publication of twenty-two stipulations on agriculture and forestry on March 17 have showed a fluctuation from hardline policy toward pineapples to softline approach to dealing with Taiwan’s agricultural investment in mainland China. This policy oscillation has demonstrated the mainland’s remedial work on its ban on the import of Taiwan pineapples on March 1, while at the same time triggering kneejerk responses from the Taiwan government and its ruling party.

From 2005 to 2019, cross-straits agricultural trade developed rapidly. On August 1, the PRC government implemented a zero-tariff policy toward a whole range of Taiwan fruits, including coconuts, pineapples and mangoes. In April 2006, the PRC government during the first trade forum held between the Chinese Communist Party (CCP) and Kuomintang (KMT) announced that the zero-tariff policy was extended to cover shrimps, bitter gourd, cauliflower and fish. In June 2010, both sides of the two governments signed the Cross-Straits Economic Cooperation Framework Agreement (ECFA), which included the mainland’s privileged treatment of offering zero tariffs to eighteen agricultural products to Taiwan. These products embraced bananas, tea and fish. In March 2019, the former Kaohsiung city mayor Han Kuo-yu of the KMT visited Hong Kong, Macau and the mainland, signing several agreements on the transactions of agricultural products for Taiwan. In March 2021, however, the PRC’s customs and excise authorities announced that, due to the presence of pests, Taiwan’s pineapples would be barred from entering the mainland Chinese soil starting from March 1.

However, such a move immediately provided a golden opportunity for many local Taiwan politicians to argue for a nationalistic approach to promoting pineapples. The Taiwan Executive Yuan announced the establishment of a task force on agricultural products to appeal to the members of the public to buy pineapples, and to subsidize pineapple farmers to sell their products to other places such as Australia and Japan. The Taiwan educational authorities encouraged schools to incorporate pineapples into the lunch menus of school children. The Taiwan Defense Ministry announced a package of assisting the Agriculture Ministry to promote pineapples to the lunch and dinner of military personnel. Suddenly, the PRC ban on the import of Taiwan pineapples stimulated a rise in Taiwan nationalism.

The apex of Taiwan’s export of pineapples to the mainland took place in 2018 and 2019, when some Taiwan farmers went to Hainan province to grow pineapples. However, the types of pineapples produced in Hainan were reportedly quite different from those produced in Taiwan. Some Taiwan pineapple farmers criticized the PRC ban on the import of pineapples for “political reasons,” a policy change that would change the farmers’ support of the Democratic Progressive Party (DPP) in Chiayi, Kaohsiung, Tainan and Pingtung. They said that the PRC exported a lot of beer to Taiwan, including Tsingtao and Bai Wei beer, and that the sudden ban on the import of Taiwan pineapples mixed up economics with politics. Some angry Taiwan farmers complained that if Taiwan pineapples really had pests, then the PRC agricultural authorities should have handled the issue more technically and procedurally rather than adopting an abrupt ban on imports.

Interestingly, some Taiwan politicians argued that it was better to export pineapples to Japan rather than to the PRC. In 2021, the export of Taiwan pineapples to Japan is expected to reach 6,000 tons, a figure representing a significant increase from 2,144 tons in 2020. Hence, some Taiwan critics of the mainland agricultural policy said that the sudden ban has triggered a closer relationship in Japan-Taiwan agricultural trade. Traditionally, Taiwan has been depending on the mainland market for its export of fruits, amounting to NT$1.51 billion out of the total pineapple export of NT$1.68 billion in 2020 alone.

Objectively speaking, the Taiwan agricultural ministry needs to play a more efficient and effective role in being the gatekeeper of the export of agricultural products to various places, including pineapples to the PRC and bananas to Japan. In early March, a Japanese trade company, Wismettac, found that the amount of pesticide in Taiwan’s bananas exceeded fivefold from the required standard, and it had to recollect and destroyed the Taiwan bananas from the market. The Taiwan agricultural officials explained that one container which included 750 boxes of bananas was found to have excessive pesticide level, and that other bananas exported to Japan passed the pesticide level tests. Yet, some netizens in Taiwan ridiculed the ruling DPP, saying that the government should have inspected its products for export more carefully and thoroughly instead of putting the blame on any export targets. Other netizens said that the Taiwan’s restraint on the Japanese action appeared to show “double standard,” meaning that the Taiwan authorities seized the PRC ban on pineapple imports to criticize the mainland while remaining silent on Japan’s action.

On March 17, the PRC government publicized twenty-two stipulations to support the Taiwan comrades and investors to develop agricultural products and forestry in the mainland. The Taiwan comrades can enjoy the same privileges as with the mainlanders in investing in the PRC to grow agricultural products, to engage in innovative research, and to expand their markets in the mainland. They are welcome to manage farmland and forestry, make investment and accumulate capital. The stipulations also welcome the Taiwan investors to participate in the production of heavy agricultural machinery, fishing facilities, smart agriculture, green products, ecological tourism, forest protection and the growing of special agricultural products and forestry. The Taiwan comrades who invest in the mainland farmland and forestry will be, according to the twenty-two stipulations, given the privilege of continuing with their business and rental agreement. They can apply for agricultural insurance, subsidies, loans and credit guarantees as well as the issuance of credit-type bonds and securities to accumulate capital. Some Taiwan businesspeople in Fujian were reportedly embracing and supporting these new policy measures, which to them can boost their confidence in business investment in the mainland.

Moreover, the PRC’s Taiwan Affairs Office clarified that the mainland side had reported 28 times to the Taiwan authorities on the pest-infected pineapples, but there was no response from the Taiwan side (Ta Kung Pao, March 18, 2021, p. A11). It seemed that the Taiwan agricultural authorities responded slowly to the complaints from their mainland counterparts.

Some Taiwan critics of the PRC’s twenty-two stipulations said that the mainland side conducted united front work on the Taiwan farmers and investors, and that the Taiwan investors had encountered many unresolved problems in the mainland, such as the sudden termination of electricity supply, and the need for some Taiwan investors to pay bribes to some corrupt cades who harassed the Taiwan comrades in the name of tax inspection (Liberty Times, March 18, 2021).

Regardless of the criticisms from the Taiwan side, the change from the policy ban on the import of Taiwan pineapples to the swift announcement of twenty-two stipulations for Taiwan farmers and investors in the agricultural industry showed goodwill gesture from the mainland side.

In conclusion, the PRC ban on Taiwan pineapples has not only illustrated agricultural politics on both side of the Taiwan Strait but also stimulated Taiwan’s nationalism and its negative response to the mainland policy. However, the PRC side swiftly changed its hardline policy ban to a more softline approach to embracing Taiwan comrades to invest in the mainland farmland and forestry industry. This policy shift has proved that mainland China remains eager to deal with the Taiwan comrades in a soft manner, repairing the damage done shortly after the March 1 ban. As such, agricultural politics will likely remain a crucial barometer of Beijing-Taipei in the coming years.