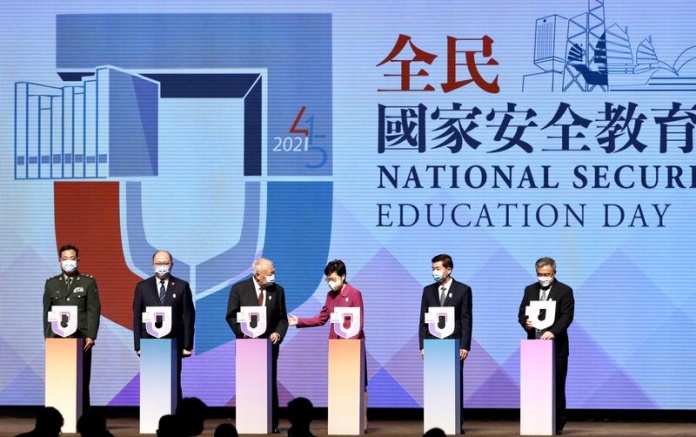 The most important aspects include the political and territorial security. Politically, the exhibition at the City Hall emphasizes that the implementation of the national security law has not only “reduced” the situation of the collaboration between local separatists and foreign forces, but also allowed the people of Hong Kong to enjoy their basic rights and freedom in accordance with the law. Most interestingly, an exhibition board demonstrating the importance of political security refers to the combination of the national security law with the electoral reform package approved by the National People’s Congress in March as a “boxing package” stabilizing Hong Kong and “elevating the governing capacity of the special administrative region.” Another exhibition board that emphasizes the significance of political security refers to “localism” as an enemy “challenging” and “resisting” the nation, tracing back those localist activities to the anti-national education campaign in 2012, the Occupy Central Movement in 2014, the Mongkok riot in 2016, and the anti-extradition controversy in 2019. These localist forces, according to the description, “begged for foreign intervention in Hong Kong matters,” “weakened the law-abiding awareness of the youths,” “endangered national security,” and “seriously undermined the social order” of the Hong Kong Special Administrative Region (HKSAR). Obviously, this official version of the detrimental impacts of “localism” is politically and educationally significant.

Two exhibition boards are devoted to explaining the concept of territorial security. One of them emphasizes that territorial security is a necessary condition for “national survival and development.” It historically describes how Hong Kong was traditionally and territorially an indispensable part of China, going back to the Qin, Song, Yuan, Ming and Qing dynasties. It also emphasizes that the younger generation of Hong Kong people are fortunate and do not experience the sufferings of the older generation, including the old generation of Chinese people who were the victims of foreign invasion and imperialism, ranging from the Portuguese intrusion into the Tuen Mun area back in 1521 to the Opium War during the Qing dynasty, and from the Japanese invasion of China in the September 18 incident in 1931 to the Japanese invasion and occupation of Hong Kong on December 25, 1941. Another exhibition board focuses on the stationing of the People’s Liberation Army (PLA) in the HKSAR on July 1, 1997 as a realization of the sovereignty of the People’s Republic of China (PRC) over the territory. Interestingly, the exhibition board ends with a note saying that since the HKSAR was established, “internal and external forces that undermine territorial security persists latently” until the enactment of the national security law.

The exhibition boards that emphasize political and territorial security were accompanied by the important remarks made by the Director of the Liaison Office, Luo Huining, who said on April 15 that China “will teach a lesson to foreign forces that intend to use Hong Kong as a pawn” (The Standard, April 15, 2021). Moreover, the Director of Beijing’s Office for Safeguarding National Security in Hong Kong, Zheng Yanxiong, said on the same day that the people of Hong Kong accepted and embraced the national security law (The Standard, April 15, 2021). Zheng heaped praise on the Chief Executive, Carrie Lam, and the territory’s disciplined serves for showing justice and fairness in the enforcement of law to combat crime and to stabilize the city. He added that they “are the safeguarding gods for the national security in Hong Kong.” Zheng also praised the judges, prosecutors, lawyers and legal experts for their supportive attitude toward the necessity of safeguarding national security in the HKSAR.

On April 22, the Education Department of the HKSAR publicized the new syllabi of the primary and secondary school subjects that enforce national security education. At the primary school level, the Chinese language education from primary one to primary six includes the need for teachers to help students understand the Chinese culture, tradition and heritage. The objective is to nurture a strong sense of Chinese cultural identity among the students, who can accumulate their knowledge on the excellence of the Chinese culture through reading and other language activities.

Moreover, the technology education subject and the science subject from secondary level one to secondary level three need to inculcate national security awareness to the students in a deeper way. For instance, the technology education subject will require teachers to use case studies to analyze and discuss with students how rumors that are spread over the Internet can have negative and serious consequences. Furthermore, students must be taught to realize the importance of using the Internet safely and responsibly. The Internet must be understood by students as having potential security threats, and as such, the proper use of the Internet is of paramount importance.

The science subject is required to teach students on new security frontiers, such as biological security, public health and infectious diseases. Students will be required to learn the topics of ecological and environmental security as well as resources (water, oil and energy) security so that sustainable development can be understood comprehensively.

Five subjects from secondary level four to six also examine national security in a much deeper way: (1) business, accounting and finance; (2) health management and social care; (3) information and technology; (3) chemistry, and (4) physics. In the subject of business, accounting and finance, students will be taught on the trade disputes and conflicts between China and the US, and the topic of One Belt One Road. The objective is to let students understand that Hong Kong as part of China provides a window for overseas investors to invest in the mainland, while being an international platform for mainland Chinese enterprises to reach out to the overseas countries. Economically, the relations between Hong Kong and mainland China are close, mutually beneficial and inseparable. Without the protection of economic security, the two places cannot and will not achieve mutual economic benefits. The subjects of health management and social care, and of information and technology tend to overlap in their emphasis on the students’ awareness and proper use of the Internet, while realizing the importance of morality and responsibility in Internet activities. The subjects of chemistry and physics stress the importance of resources security.

While the hardware components of the national security education, namely the syllabi, textbooks and references (the government has prepared a whole set of references for schools) are already entrenched, the challenge is to train the trainers. A survey conducted by the Hong Kong Federation of Education showed that 81 percent of the 280 principals and vice principals said that the current positions at primary and secondary school levels are not enough, and that it is difficult for them to follow up with the coordination work. 74 percent said that many teachers are unfamiliar with the topics concerned, while 64 percent expressed the view that the current syllabi are already tight. 57 percent replied that the teaching resources are inadequate. As such, it is urgent for the education authorities to provide more on-the-job training for the teachers and to inject the necessary resources to primary and secondary schools.