Data from the first days of the golden week is in, and it is not what many expected or hoped. Earlier signals from different quarters suggested, at least, the expectation of a big inflow. Not long ago, there was even talk in town that some hotels might be reaching full occupation. The reality seems to have come short on fulfilling those hopes and sharp on compounding previous worries.

A tour in town would indeed suggest to the naked eye that there was a noticeable, but not extraordinary, increase in tourists on the first two days of the month.  The ‘visual inspection’ is consistent with the few figures available.

Major hotels seem to have reached around 40 per cent occupation, well short of previous expectations. Less than 40,000 visitors in the first two days of the holiday period is a number far from what could signal the beginning of a revival, let alone a sustained path for recovery.

Meanwhile, it will be interesting to find if, behind these pallid numbers, we will see also changes in the visitors’ flow composition. How many came from areas other than Guangdong or the closest cities, geographically and socially, such as Zhuhai, Zhongshan, or Jiangmen, for example? And those coming from farther away, did they stay just a few hours in town and returned to lodgings across the border?

Indeed, nobody expected the recovery to happen painlessly and speedily. The first figures give a reason for concerned reevaluation. Many reasons concur for this state of affairs. Part of the reason might be a relatively late restart of individual visas issuance. But possibly it goes well beyond that.

The effects of the pandemic on Chinese consumers’ income will take time to gauge.  The effective closure of tourism from other sources effectively blocks the search for alternatives, no matter how limited. The severe effects on Macau businesses’ operations and performance are a reason for added cautiousness. The labor market conditions will take time to get back to something that might look like the usual.

These are known factors; all suggest prudence in hope. Few people will dispute their relevance; they are part of any argument about a recovery. Other broader issues we tend mostly to forget, if not avoid deliberately. Sooner or later, we will have to introduce them to the debate. The relation with Hong Kong and the health policy mindset for the times to come are among those topics.

September 20, 2021
Nigeria's President Muhammadu Buhari on Sunday ordered the incorporation of the state-run oil company within...

September 20, 2021
A swarm of bees has killed 63 endangered African penguins on a beach outside Cape... 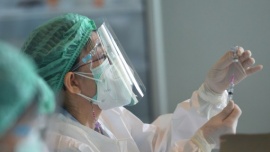