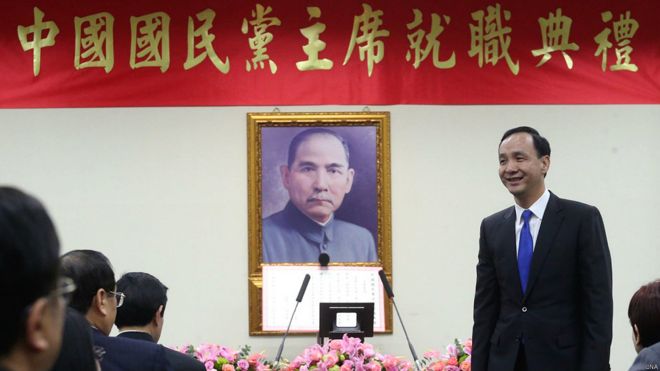 The visit of Eric Chu, the chairperson of the Kuomintang (KMT) or the Nationalist Party in Taiwan, to the United States has significant political implications for not only the KMT-US relations but also Taiwan’s relations with the mainland.

On June 2, when Chu embarked on the first day of his US trip, he visited the Hoover Institution at Stanford University, saying that he was optimistic about the KMT performance in the county and mayoral elections by November 2022, and that the KMT would nominate its “best candidate” to win the 2024 presidential election. He stressed that the KMT has close relations with the US and that it had a long-standing position of “resisting communism” for one hundred years. Chu asserted that the KMT’s priority was to “defend the Republic of China (ROC)”and “put the defense of Taiwan as the first task.”

On June 5, during a banquet with the overseas Taiwanese in Washington, Eric Chu said that the KMT image was tarnished by portraying his party as “anti-US” and “betraying Taiwan.” Chu added that he hoped the KMT candidate who would be selected to run for the next Taiwan presidential election would establish a communication channel with the US, and that such channel had no relations with himself. Chu implied that he would not run for the KMT’s internal selection of presidential candidates.

On June 6, Chu delivered a speech at the Brookings Institution, emphasizing that Taiwan can be “a stabilizer of the international order,” “a defender of democracy,” and “a bridge between East and West.” However, Chu did not elaborate on how the KMT could serve as a “bridge” between the US and mainland China. He remarked that the KMT is “pro-US,” “pro-peace” and “pro-democracy.” Ideologically, Taiwan has shared the values of liberalism with the US, according to Chu. As such, Taiwan can and will not only help the West to understand mainland China but also promote the openness and cultural interaction between China, the West, Japan and Southeast Asia.

In his dialogue with the American participants, Chu said that the reopening of an office of the KMT in the US would “partially” reflect the views of the Taiwan people to the American side. His comment at the Brookings Institution on June 6 echoed what he had said at Stanford University on June 2, when he had mentioned that the KMT office would enable the Americans to understand the perspectives of the Taiwan people more comprehensively without the monopolization of Taiwan’s public opinion by a minority of people or a specific political party. By implication, Chu emphasized that the KMT office in Washington would let the US government and China experts to tap the views of a broader spectrum of Taiwan’s society without just listening to the dominant views articulated by the ruling Democratic Progressive Party (DPP) and its representatives in the US.

The most provocative remark made by Eric Chu during his visit to the US was his comment on the 1992 consensus between mainland China and the KMT, namely there is only one China but the interpretation of “one China” was up to both sides. Surprisingly, Chu referred to the 1992 consensus as “non-consensus consensus,” and he added that such consensus was a kind of “creative ambiguity.”

The term “non-consensus” aroused an immediate reaction from the DPP side and mainland Chinese commentators. The DPP reacted to Chu’s remarks on June 7 quickly, saying that the 1992 consensus did not really give any “ambiguous” space to the Taiwan side. The DPP criticized Eric Chu’s KMT for “ignoring the international circumstances” without “any help and dignity to protect Taiwan’s national security and dignity (Liberty Times, June 7, 2022).” The DPP argued that the Mainland Affairs Council on June 2 published a survey result showing that “over 80 percent of the Taiwan people do not identify themselves with the 1992 consensus.”

A mainland commentator, Hu Xijin, from Global Times,criticized the KMT of becoming “a small DPP” and “a bubble.” Hu said that many mainland Chinese people who heard Chu’s reference to the 1992 consensus as “non-consensus consensus” felt “very uncomfortable,” because the KMT chairperson made a retrogressive step in comparison with the period of former KMT president Ma Ying-jeou. Hu added that the KMT has become much weaker than ever before, partly due to the pressure of public opinion in Taiwan and partly because of the US attitude.

Hu wrote: “We of course dislike the retrogressive attitude of the KMT, but even if we are angry and scold the KMT – thedegenerating party of one hundred years – this is useless. The mainland can only rely on its action to exert more influences on the island so that the island’s political atmosphere would not be hijacked by the forces of ‘Taiwan independence,’ and that the survival space in the advocacy of one China would continue to expand (Ming Pao, June 9, 2022, p. A14).”

On June 9, the Taiwan Affairs Office’s spokesperson, Ma Xiaoguang, was asked by a reporter on his reaction to Eric Chu’s comment on the 1992 consensus. Ma replied that the 1992 consensus should not be “distorted,” that the consensus between the Communist Party of China and the KMT in “persisting the one-China principle and pursuing national reunification” was “written black and white clearly” (see the website of the Taiwan Affairs Office of the State Council, www.gwytb.gov.cn, June 9, 2022). The response from Ma showed that the official position of the People’s Republic of China (PRC) is that the 1992 consensus is clear.

Coincidentally, on June 7, the former chairlady of the KMTHung Hsiu-chu was visiting Beijing. Hung said that the Chinese people across Taiwan and the mainland should not be intervened by any “hegemonic power,” that the DPP does not recognize the 1992 consensus, that Taiwan is experiencing a process of “de-Sinification,” and that the next generation of Taiwan people would have an identity distant from the mainland (Sing Tao Daily, June 7, 2022).

Chu’s visit to the US has tremendous political implications. First, in terms of the KMT-US relations, the increasingly politically weak KMT has reestablished its office in Washington and allowed the US politicians and government officials to grasp the perspectives of the pro-reunification party.

The light blue camp naturally adopts a less firm position on the 1992 consensus due to the political market and public opinion in Taiwan; nevertheless, it remains to be seen whether the KMT rejuvenation can and will be successful under the leadership of Eric Chu.

It is reported that Chu is trying to groom Wayne Chiang Wan-an as the candidate running for the election of the Taipei mayor. If Chiang can win the election, he will be groomed as the rising star in KMT, like Ma Ying-jeou who was elected as the Taipei mayor in 1998. It is also reported that Chu may groom and support Hou Yu-ih, the current mayor of the New Taipei City, as the KMT presidential candidate in 2024. It remains to be seen whether Eric Chu will succeed to revive, reorganize, reinvigorate the KMT by grooming Hou and Chiang. But one thing is clear: Chu’s remarks on the 1992 consensus show that the light blue camp is cautious in avoiding an explicitly “pro-China” image, which will likely be a liability in Taiwan’s bitterly fought local and national elections.

Ideally, the KMT’s light blue camp led by Eric Chu can portray a clear image of being the bridge between the US and mainland China, and of being the stabilizer who can have dialogue with mainland China on the one hand and compete with the ruling DPP effectively in the electoral market on the other hand. If the bridging function of the KMT can be consolidated, its electoral prospects in Taiwan’s elections will likely be bolstered as most Taiwan people prefer to witness stable cross-strait relations.

In conclusion, Eric Chu’s visit to the US and his remarks have important political implications for KMT-US relations and cross-strait relations. The American politicians and officials canlisten to the views and perspectives of the pro-reunification party in Taiwan. Nevertheless, the light blue camp led by Eric Chu can be regarded as a “soft” pro-reunification force, showing a less firm attitude toward the 1992 consensus than the dark blue camp as epitomized by Hung Hsiu-chu and Chang Ya-chung, who can be seen as the “hard” pro-reunification force within the KMT. It is likely that the light blue camp will remain cautious in its attitude and policy toward China in the forthcoming county and mayoral elections. Yet, if the KMT factions can be united in their attitude toward how the party’s bridging function can be consolidated and clarified, cross-strait relations and even Sino-American relations would perhaps have a potential breakthroughin the years leading to the 2024 presidential elections.